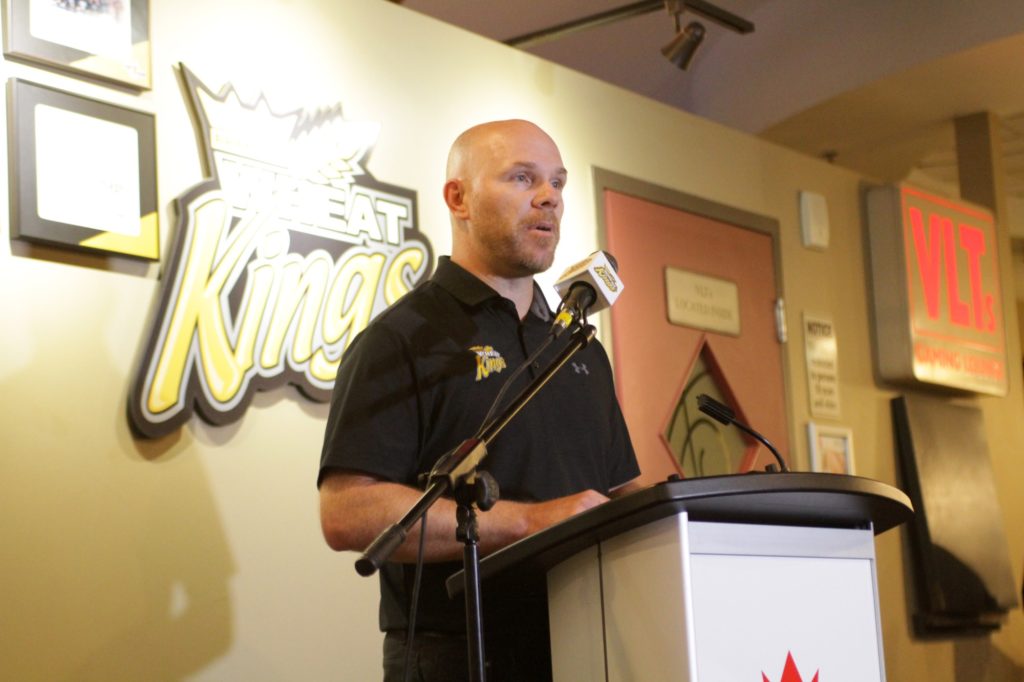 (Courtesy of Branodn Sun) — Darren Ritchie has a new right-hand man with an eye for Western Hockey League talent.

The Brandon Wheat Kings general manager announced Doug Gasper as the club’s assistant GM at a press conference in the Wheat City on Thursday.

The 55-year-old from Rosetown, Sask., most recently worked for the NHL’s Vancouver Canucks as a western Canadian amateur scout, and spent time as Moose Jaw’s director of scouting for the two seasons prior. Gasper’s work helped the Warriors to the top of the East Division in the 2017-18 season.

“I’d like to thank Kelly McCrimmon and Darren Ritchie for this tremendous opportunity,” Gasper said in a news release. “The Wheat Kings are a model franchise in the Western Hockey League and the opportunity to work with Darren and the hockey operations staff is exciting. I look forward to continuing the tradition of successful Wheat King hockey.”

Gasper is set to take the lead on scouting, after Ritchie spent the past three seasons as Brandon’s director of scouting, but will also work with Ritchie with the on-ice product.

Ritchie is looking forward to working closely with him.

“Doug’s a good man, he’s a hard-working guy and I thought it was good to have an assistant GM,” Ritchie said. “Him and I see the game very well the same way. Doug was great to me early on in my scouting years, he helped me out a lot and I like the way he sees the game like I do and he’s going to be a real good fit.”

It’s been the biggest off-season of change since the one following the Wheat Kings’ WHL championship run in 2015-16, when owner Kelly McCrimmon took on the assistant GM role with the NHL’s Vegas Golden Knights and appointed Grant Armstrong as GM and David Anning as the bench boss. Their three-year contracts were up this off-season and weren’t renewed, and the team has slowly filled those vacancies.

Ritchie was promoted to general manager on July 12 and Lowry was announced as the head coach on July 18. The club soon after revealed former Wheat King captain Mark Derlago as an assistant coach along with Don McGillivray and goaltending coach Tyler Plante.

On Thursday, it was announced that William Sadonick-Carriere will be the team’s fourth athletic trainer in five seasons. He replaces Roman Kaszczij, who joined the American Hockey League’s Utica Comets.

Sadonick-Carriere recently earned a bachelor of science degree in athletic therapy from the University of Winnipeg, and gained experience with the AHL’s Manitoba Moose.

“It’s a lot of different faces and it’s important for us to get the right mix, and we really believe we’ve done that,” Ritchie said. “When you get a coach of Dave Lowry’s stature, it’s a statement. Our players are excited talking with them and I expect our guys to come in real hungry. Obviously when you don’t make the playoffs, we’ve got a lot of work ahead of us.”

“I’m real excited, just sitting talking hockey with Dave and the staff, it’s fun,” he added. “It’s going to be great and I think our guys will be really happy with the way things are going to roll out here.”

Lowry arrived in the Wheat City on Wednesday, just two weeks before training camp opens on Aug. 28. Lowry played 1,084 NHL games with five different teams in 19 seasons from 1985 to 2004. His last stint was with the Calgary Flames, and he stayed in the city to become an assistant coach with the WHL’s Hitmen.

After taking over the head coaching job his fourth season, he soon earned an assistant job back with the Flames. Then he was the Victoria Royals’ head coach for five seasons before spending the last two as an assistant with the Los Angeles Kings.

That’s all to say hitting the ground running in a new city is old hat for the 54-year-old.

“Listen, my wife’s a professional packer, so not a problem,” he said of the time to settle in before camp.

“It’s been great. I think the best part is I came in (Wednesday) afternoon and it’s been ‘Go’ since. The best part is you’re (settling) in and the preparation, now you can actually see it, just getting ready and talking things over with your staff, what the expectations are going to be for all of us and for the players.”

Lowry has switched back and forth between junior hockey and the NHL enough to be used to the adjustment. He says it’s the same game, just with smaller players in the WHL — especially with 16-year-olds on his roster again.

While he’ll shake a bunch of hands for the first time when the players arrive, he’s done his homework. Lowry says he watched many of Brandon’s games from the 2017-18 season, when it amassed a 31-29-4-4 record and missed the playoffs by two points.

“I think the biggest change that we will implement is the play away from the puck. How hard it is to get it, how hard it is to keep it. Everybody talks about wanting to score goals but you have to find a way to get the puck. The quicker we can get it, the less time we have to play defence. … It’s no different than any team I’ve been with at this age level. They’re all skilled players when they have the puck. These are areas we can teach and we can improve on and will be a staple in our game.”

While every matchup matters in what’s perennially a tight Eastern Conference playoff race, one stands out this year. The Kootenay Ice moved to Winnipeg for the upcoming season, switching from the Central to East Division, and the Wheat Kings are set to take on their new provincial rival 10 times during the 68-game campaign.

The two get familiar right away on opening night as the Ice hit Westoba Place on Friday, Sept. 20, then the Wheat Kings visit Wayne Fleming Arena on the campus of the University of Manitoba the following evening.

“I think it’s perfect. It’s two and a half hours up the road, it’s flat highway,” said Lowry, whose son Adam plays for the Winnipeg Jets. “(The Ice) are going to be a very good team. It is now an instant rivalry and hopefully it’s a very good rivalry for us. The close proximity is only going to help it.”

ICINGS: While single-game tickets don’t go on sale until early September, five-game Manitoba mini packs go on sale today until Sept. 20. They include a ticket to each regular season home game against Winnipeg (Sept. 20, Nov. 11, Nov. 29, Dec. 27 and March 21) for $92 for adults, $80 for seniors, $68 for youth and $44 for children … As of Thursday’s press conference, 2,020 season tickets were sold. The club hopes to improve that mark to the near 2,600 it sold last season, before the regular season begins. The team averaged 3,761 fans per home game last year … Rookie camp will run from Aug. 28 to 30 before main camp takes over on Aug. 30 and 31. The intrasquad game is set for Sept. 2 at 2 p.m. … Brandon and Winnipeg also meet in their pre-season opener Sept. 6, then will meet in the middle down the Trans-Canada Highway at Portage’s Stride Place the following night.