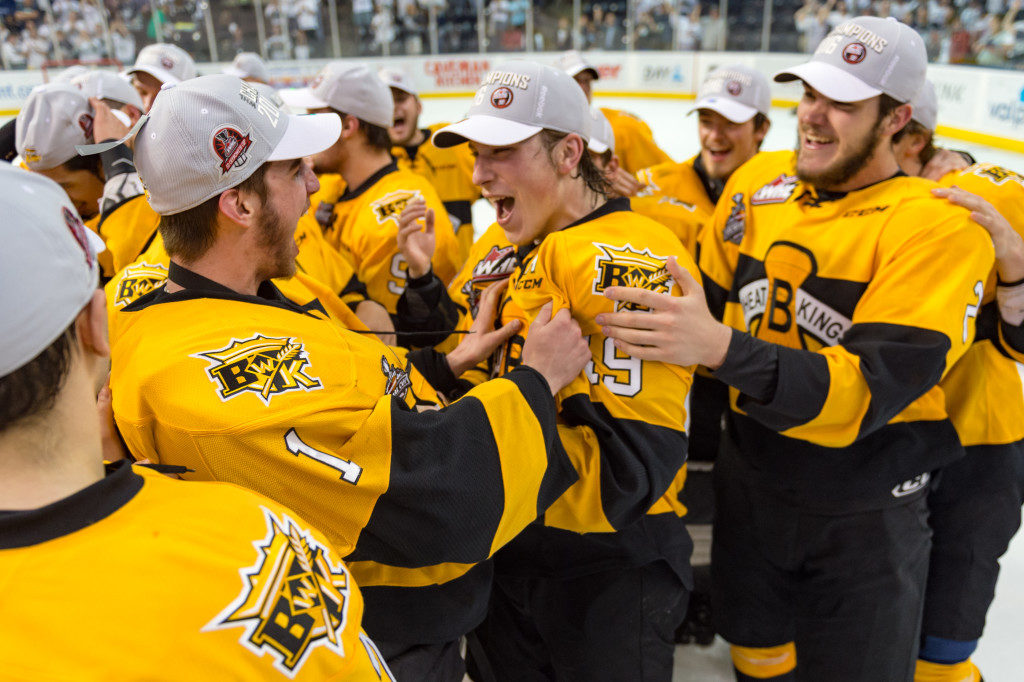 Like so many great stories, Game 5 was told in three acts. The Wheat Kings built a 3-1 and appeared to be cruising to a title. But in a 10-minute span in the second period, Seattle scored three times to take a 4-3 lead in echoes of Game 4.

Hawryluk scored before the middle frame ended on an incredible passing play by Tim McGauley, however, to send the teams to the dressing rooms after 40 minutes tied 4-4.

HAWRYLUK: “Timmy picked it up at the blue-line and I saw him going in wide one-on-one. I knew if I just got to the net that anything could happen on a shot but he pretty much even fooled me as he made a nice little pull through the legs and beat his guy wide and made an incredible no-look pass that I put into the empty net. It was pretty easy. Being one of my best friends and favourite teammates, it was pretty cool to get that pass from him in such a crucial moment.”

As the Wheat Kings waited for the chance to return to the ice, the task at hand was crystal clear. Win the period, and they would win the league.

REID DUKE: “In the dressing room we were saying how lucky we were to have such an amazing play by Tim to drag it around and then feed Jayce for an open net. Going into the third on the road, if we’re down one, that’s tough to come back from, and if we lose another game, then the series is 3-2 and it’s anybody’s series. We were so dialed in for that third we just came out so hot and so fast. We wanted to do it that night.”

McCRIMMON: “I really felt that Jayce’s goal was a big goal to tie it up before the intermission. I thought that was huge. When you get to that point, you’re 20 minutes away from being league champion. When the goal was scored that gave us some momentum, and with the end in sight, it’s easy to motivate yourself and try to get the victory and the series and the championship.”

MITCH WHEATON: “I remember going into the dressing room before the third period and all the old guys just stood up and said, ‘OK, we’re not letting this happen. We’re finishing this thing right now.’ That was our mindset on the bench. No matter what happened, we’re going to go out on the next shift and win that shift.”

JORDAN PAPIRNY: “It was strange because there were a lot of penalties and a lot of changes in momentum. We were ahead in the first period and then they came back. I know Jerret Smith got that goal on the power play that gave them a lot of life and (Alexander) True got them a goal fairly late in the period and then Jayce Hawryluk struck back on a really good play by Tim late in the period to tie it up. Going into that intermission, we were just super happy to have it tied up. At that point, we knew it was like a mini-overtime almost. We had one period left, it was tied up and we wanted to seal the deal right away and not have to bring it back to Brandon because anything could happen in those two games.”

NOLAN PATRICK: “I think when you’re that deep in the playoffs, not much needs to be said. I think everyone knows what’s at stake. I think Crim did a phenomenal job of keeping everyone ready and dialed in. We had some penalty trouble and they got up 4-3 and Tim responded pretty soon after with that amazing toe drag play to Jayce so it was a highlight play from Timmy. It’s kind of something you expect out of Timmy with his vision and the playmaking ability he has.”

Unfortunately, the Wheat Kings were playing one man down after third-pairing defenceman Jordan Thomson took a hit from True in the middle frame.

THOMSON: “Having concussion problems in the past, I ended up taking that hit and blacking out. I don’t really remember a lot after the hit.”

The tension quickly boiled over when, 79 seconds into the final frame, Brandon’s Tyler Coulter and Seattle’s Donovan Neuls were sent off with coincidental minors.

COULTER: “I almost got into a fight. We got coincidental penalties. I got slashed on the foot (by Neuls) and punched a guy in the face. We almost went at it right there. There were trying to come out and bully us.”

With the teams playing 4-on-4, Patrick pounced.

PATRICK: “I remember picking up speed and getting the puck through the middle and trying to make a little move on the D-man and lost it a bit into the corner. I kind of knew Hawy would automatically be going behind the net so I threw it around to him. I think Wheats threw it back down to Jayce and Jayce threw it to me. I tried to get a step on the D-man coming out of the corner and protect the puck and it ended up that the rebound came back to me and I flipped it over and in.”

KALE CLAGUE: “When you have a chance to close it out and you take the lead, you’re definitely a little nervous but you’re more excited to be in that moment.”

Three minutes after that, Matthew Barzal took the final penalty of the series, for hooking, and Hawryluk scored again 39 seconds later.

HAWRYLUK: “When we got that power play, it was ‘OK, time to put the game away.’ They were a dangerous team and with that crowd behind them, we knew anything could happen in a one-goal game and we knew if we scored on that power play it was over.”

Seattle was still very much in the game, trailing 6-4 with 3:19 remaining, when Hawryluk scooped up a puck in front of his own net, turned and fired it down the ice into the empty net. Suddenly the Wheat Kings had a three-goal lead late in the third period and the series was all but over.

PATRICK: “I remember him shooting it from our own end and thinking ‘What are you doing?’ I was thinking there was no chance and Jayce puts it centre cup. Obviously that was a big relief and he was looking to the heavens from blue-line to blue-line in celebration.”

At that point, the Brandon bench was simply waiting for the final seconds to tick off the clock.

COULTER: “There were a couple of guys we had to tell to settle down a little bit. It was just that excitement. You couldn’t have scripted it any better. The other games ended in overtime and there was a rush of adrenalin but this lasted a few minutes. He was sending Tanner and Stelio’s line and then Ty Lewis’s line and then Tanner’s line. So here is Patty’s line and McGauley’s line sitting there with all of our gear undone. We were ready. We already knew it was done because we’re up by four and he doesn’t want any of us to get hurt. It was three minutes sitting on the bench just waiting to go.”

DUNCAN CAMPBELL: “I honestly can’t explain that feeling. Having the highs and lows of the game, going up 3-1 and then being down 4-3, tie it 4-4 and from there we just kept on rolling. 5-4. 6-4. Empty net. Empty net. You just got butterflies. It was ‘Holy crap, this is really happening’ and you don’t know how to react. You just want to hug everyone, the anticipation is killing you. The way everything went from the previous season to three overtime finishes to the crazy highs and lows of that Game 5, it all came out in the last few minutes.”

JAMES SHEARER: “It was my first year on the team and it was pretty exciting but we knew there was still time on the clock. I think that’s where the leadership and coaching really came in and showed. It was ‘Come on guys, let’s focus now and we can celebrate later. Let’s just do this right, like we have all year.’”

WHEATON: “You know it’s going to happen and everything starts to settle in a little bit. You start to get that feeling of ‘Wow, we’re actually going to do this’ but I think our coaching staff did a great job of handling our emotions and making sure that we played every shift in that last few minutes like it was a tie game. But on the bench you’d look at the guy beside you and you both have that little smirk on your face.”

Mattheos added another empty netter with 21 seconds remaining to finish the scoring.

MATTHEOS: “It was nice for Kelly to give us that shift. I hadn’t scored in the final yet so it was kind of cool to get one in that game, even though it was a nothing goal. I think it was more Kelly rewarding our line to be out there.”

HAWRYLUK: “I just remembered the feeling of losing the year before in the finals and that fire was lit in me all season. There was another disappointment at Christmas and motivation. I just wanted to prove that we were the best team. … I remember going into that game how motivated and fired up I was. I don’t think I spoke to many guys before that game — sometimes I’m pretty loose but I was pretty dialed in going into that game. I was obviously a little lucky I got to play in that game because of the incident with Ottenbreit.”

PROVOROV: “Hawy was always able to get hot and just go off in one game. He contributed a lot in the playoffs but it was definitely one of those games that everything Jayce touched was turning into goals, turning into scoring chances. He was a massive help that game. It just showed what kind of player Jayce is and was in junior, a difference maker. We had a ton of those on our team and I think that’s why we won.”

TANNER KASPICK: “Jayce obviously went off that night, and thank God he did. It was pretty impressive to step up in a moment like that.”

HAWRYLUK: “It was time to wrap it up. There was no way they could stop us. That was one of the best games we played all year.”

This is the first of three Brandon Sun WHL Championship articles to be run this week. On Friday, we revisit the 1996 Championship Final vs. Spokane Chiefs.