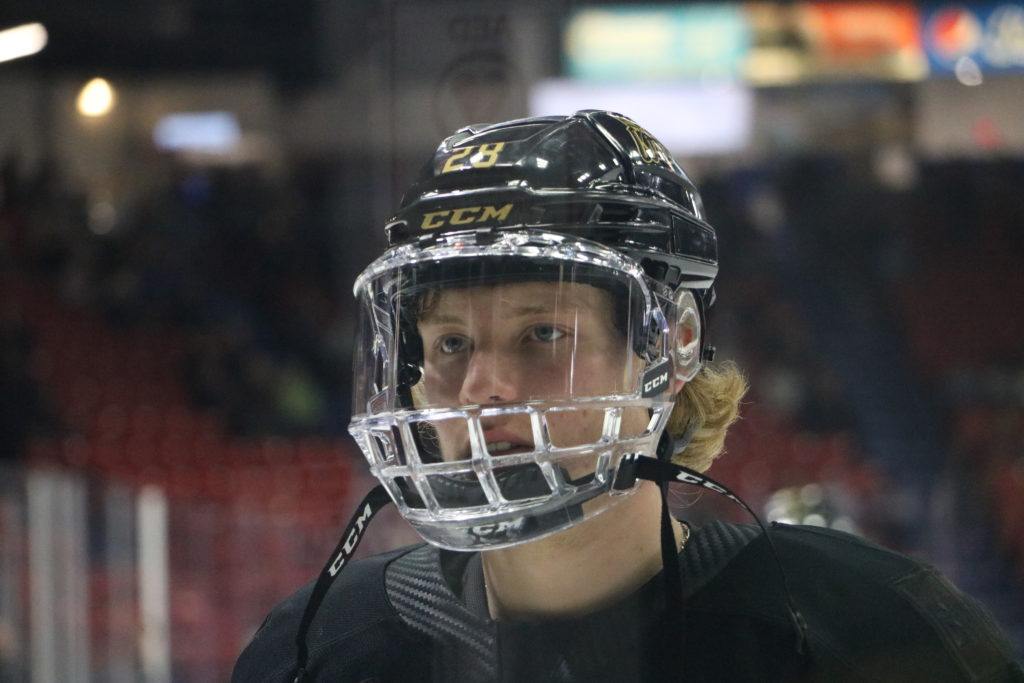 Photo: Ben Thornton’s lone goal wasn’t enough Wednesday night even with the Wheat Kings putting up 52 shots on the Pats.

Brandon, MB – The Regina Pats rely on their goaltending to edge the Brandon Wheat Kings Wednesday night by a score of 3-1.

It was the best opening period of the season for the Wheat Kings who put up 17 shots on the Pats goaltender Matthew Kieper early on. Only one goal was score out of those 17 shots, a deflection off the glass would bounce to the stick of Ben Thornton allowing Thornton to push the puck into the net to make it 1-0 Wheat Kings. The Pats would get a powerplay opportunity late allowing Connor Bedard to find Alex Suzdalev on one time drive to tie it up at 1 heading into the 2nd period.

Only 45 seconds into the second the Pats would capitalize on a Wheat Kings turnover allowing Tanner Howe to catch Carson Bjarnason out of position to give the Regina Pats their first lead of the game. The Wheat Kings would have a golden opportunity to tie it up with a 44 second two man advantage but the Regina Pats were able to escape a late period push from the Wheat Kings to keep it 2-1 Pats after two periods.

The Wheat Kings needed a big period in order to tie it up or win the game, but Pats goaltender Matthew Kieper stood tall stopping 51 of 52 shots on route to a Regina Pats 3-1 victory after Alexander Suzdalev scored the insurance goal late.

Despite the one sided shots, Wheat Kings coach Don MacGillivray didn’t think his team were in the right spots to score goals this evening, “I don’t think we paid the price to score goals. Sometimes you need to get those greasy ones, get in his eyes or get up top and we didn’t do that and the goals we allowed were missed assignments. When you give a team that has opportunistic players those kind of looks they’re going to make you pay and they did. And we didn’t. We had a couple looks on the powerplay tonight to even things up and we couldn’t bury it. That was the difference in this game”.

The Wheat Kings now turn their attention to the Saskatoon Blades who they host Friday night. Fans can catch the game on Q Country 91.5  starting at 6:30 PM MB time.