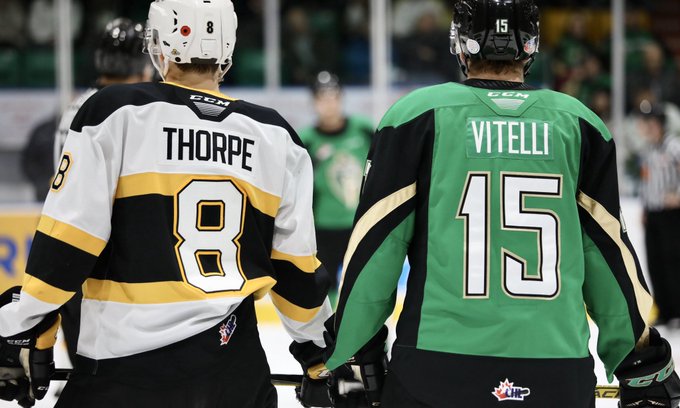 Prince Albert, SK. – The Brandon Wheat Kings kicked off a 2-game Saskatchewan road trip Friday night with a 6-3 loss to the Raiders in Prince Albert.

The Wheat Kings, who slipped to 8-11-0 on the season, surrendered four first period goals but battled all night. In fact, Brandon pulled to within a goal after two periods before the Raiders pulled away with back to back third period markers.

Prince Albert got goals from six different players while Luka Burzan scored twice in a losing cause. Rookie Nolan Ritchie rounded out the scoring for the Wheat Kings, who will close out the trip Saturday night in Saskatoon.

Despite the loss, Brandon coach Dave Lowry told the Brandon Sun that his team played well.

“We battled back after giving up a couple of goals,” Lowry said. “I really liked the way that we dug in and got the game tied, but we had a little hiccup there where we gave up a couple of goals in the last minute of the first. But I thought the second period was probably the best period we’ve played all year.”

Zach Hayes, Evan Herman, Brayden Watts, Jakob Brook, Erik Pearce and Ozzy Wiesblatt scored for the Raiders, who improved their record to 13-3-3-0 on the season.

Netminder Ethan Kruger, who was starting his 12th consecutive game, was pulled after giving up four goals on eight first period shots. He was replaced by veteran Jiri Patera, who was playing his first game since suffering a lower body injury in early October.

Patera and Kruger combined to make 18 stops for the Wheat Kings, who went 1 for 3 with the man advantage.

Following Saturday’s game the Wheat Kings will return home to host the Winnipeg Ice on Remembrance Day Monday. Tickets to that game will be on sale at the Keystone Centre box office all day Saturday. The arena box office will not open until 1pm Monday.