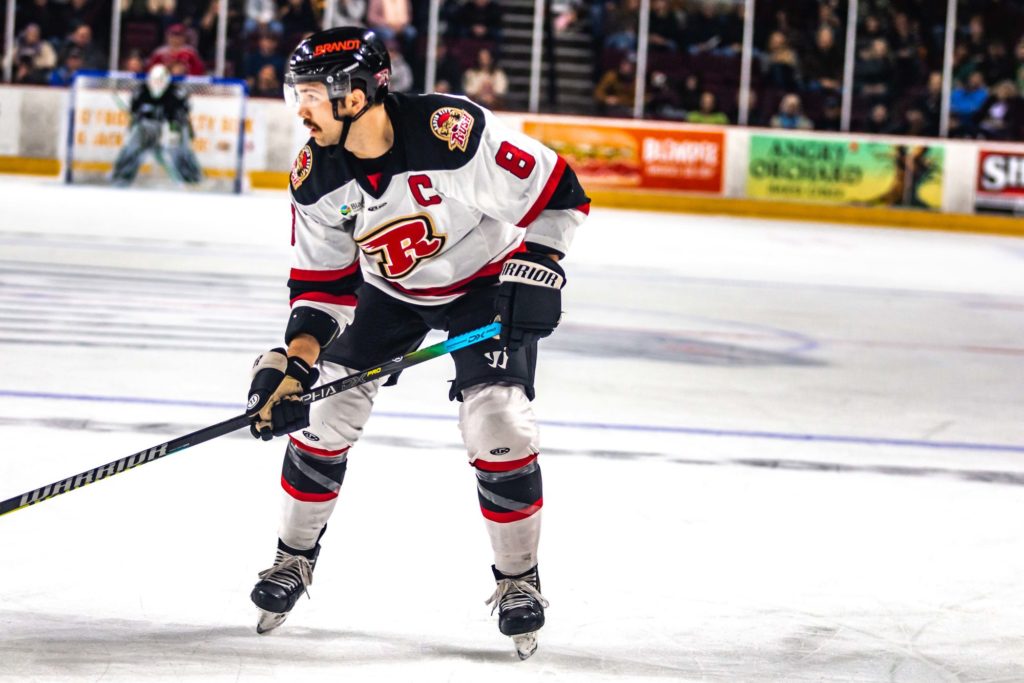 Peter Quenneville brought his professional hockey career back to North America this season, and quickly found a home in South Dakota with a pair of other former Brandon Wheat Kings.

Quenneville, 26, returned after three seasons in Europe to thrive with the ECHL’s Rapid City Rush this year on a team with Brandonite Tyler Coulter that was coached by former Wheat King Dan Tetrault. The five-foot-11, 196-pound forward said Rapid City proved to be a good fit for several reasons, including Tetrault’s encouragement and belief in him.

“First and foremost, he had a lot of trust in me and gave me a lot of freedom to do the things I started to do in Norway, playing much more of a puck-carrying, dynamic game,” Quenneville said. “I had a lot of freedom and trust, and the ability to grow my own confidence early in the season. I had very good linemates as well … Those things all came together and we had a fantastic start to the season.”

After finishing up his junior career in Brandon following a sweep by the Kelowna Rockets in the 2014-15 league final, Quenneville spent most of the next campaign with the ECHL’s Cincinnati Cyclones.

He decided to head to Europe for the 2016-17 season, landing in Denmark with the Aalborg Pirates. Quenneville quickly found his scoring touch, putting in 30 goals and 19 assists in 45 games.

“That was the first time I’d ever touched down in Europe,” Quenneville said. “It was definitely a unique experience. You don’t really know what to expect or have any idea what it’s really like. That was my introduction to European life. It’s pretty easy going.”

He also had a chance to do some travelling and discovered he loved the city of London during three visits.

“I kind of felt at home,” Quenneville said. “The first thing that was nice was to be able to come back to a place where all the signs on the road were in English and you can order on the menu in English. It’s just an incredible, incredible city with so many unique monuments and places to go.”

Quenneville split the next season between Aalborg, HC Dynamo Pardubice in the Czech league and SaiPa in the top league in Finland. In the 2018-19 season, he moved to Sparta Sarpsborg in Norway, and scored 20 goals and added 20 assists in 48 games.

He said adapting to the game there helped him.

“A big thing about going to Europe was being a go-to guy,” Quenneville said. “I think it was learning how to adapt to the big ice and playing that puck possession style where you try to hang into it longer and use the open ice. Overall, I think learning to adjust to the big ice really helped my skating and also understanding how to get to the valuable ice.”

He said a big reason for heading over to Europe was to build up his game enough that he could be a more impactful player when he returned to North America. That, combined with some European leagues cutting down on imports, made it a good time to come home.

Quenneville weighed his options, and ultimately settled on Rapid City and a return to the ECHL, which is colloquially referred to as the “Coast” for its previous name, the East Coast Hockey League.

It didn’t hurt that his former teammate Coulter would be in South Dakota too.

“It was exciting to know that there would be a guy I’ve known for a long time,” Quenneville said.

While the league hadn’t changed, Quenneville’s role in it shifted dramatically. A lot more was suddenly expected of him.

“It was pretty much night and day,” Quenneville said. “I was just a much improved player. It was the Coast I remembered in terms of travel and lifestyle and all the guys but in terms of on-ice, it was definitely a better experience for me this year than my first year … It was exciting to be counted on in all situations and also to be a leader. It was a great experience and a lot of fun.”

Quenneville served as team captain with the Rush, the first time he’s held that leadership role since his final season in Brandon.

He said the major difference between leadership styles in Europe and North America concerned language.

“A lot of the significant conversations over there were done in the native tongue with translations,” Quenneville said. “A lot of times when guys really got fired up or whatever the case was, some guys did it in both English and the native tongue simultaneously when they were addressing the team. For the most part it’s all the same but there is a change in the team dynamic because in Europe teams tend to be exactly the same or very close from start to finish whereas in North America, there’s quite a bit of movement, especially in the Coast.”

He said that makes it necessary for North American leadership groups to find a way to keep the team close despite almost constant change.

Quenneville scored 24 goals and added 34 assists in 51 games with the Rush, and also spent seven games on loan with the American Hockey League’s Rockford IceHogs in January. It was his first taste of the AHL since a callup in January 2016 from the Lake Erie Monsters.

Unfortunately for Quenneville, the promotion to the top farm team of the Chicago Blackhawks came with some bad luck.

“I was playing some of my best hockey at the time of the callup but I had to deal with getting a puck to the face prior to the callup, which had me in a face shield and all stitched up for a good six or seven weeks,” Quenneville said. “That was difficult to deal with but in that transition, I felt so good myself in my personal experience compared to my first game I played in my first year pro.”

He said the quality of play and execution is noticeably higher, as is the ability of the players to perceive and dissect what’s going on around them. He said the fact that the AHL dresses four lines of forwards while the ECHL only allows three makes the AHL much faster and more structured because the players are fresher.

The promotion came with one other nice perk.

His younger brother John, who was dealt by the New Jersey Devils to Chicago Blackhawks in June 2019, happened to be in Rockford when he was there.

“I was able to play one game with JQ on the same line, starting lineup and everything,” said Quenneville, noting their youngest brother David was also skating in the AHL with the Bridgeport Sound Tigers and Binghamton Devils. “With Davey out east I didn’t get to play against him. But to be able to be teammates and linemates with Johnny again was unreal. I didn’t expect we would be able to do it as pros.”

The three tightly knit brothers speak at least every day or two, and he watches them play when he can. John and David are currently holed up in Binghamton, N.Y., while Peter is home in Edmonton.

The family has a good setup at home in the basement, and he also incorporates pilates into his routine. He gets out for walks and runs as well, and has a SuperDeker training setup that helps him to work on puck control and developing faster hands.

All that he’s missing his skating and shooting.

Unlike players at both higher and lower levels, the stoppage due to COVID-19 had an immediate impact on ECHL players. The season was put on hold on Thursday, March 12, with the Rush set to play a triple header that weekend. The season was subsequently cancelled on Monday, March 16, and the players were told that day they weren’t getting paid anymore.

“That was a little bit shocking,” Quenneville said. “Unfortunately it wasn’t agreed to that we would get paid until the end of the regular season. That’s just how it went.”

A relief fund has been set up by the ECHL and and Professional Hockey Players’ Association for the league’s 600-plus players, with the ECHL kicking in $200,000 and donations being collected.

What hurt most was when it happened.

“For obvious reasons, it was the timing of it,” Quenneville said. “We give up at least three paycheques and then we would have qualified for the playoffs and that was probably at least another. Who knows after that? For everybody involved, making up for that financial loss — and even just having an apartment and chewing up time, eating where you are after the season — it was definitely unfortunate. Hopefully guys will either be able to get relief from the government or find another job and make money on the side.”

The pandemic also hurts players financially in another way, as many work at hockey schools that may not be held this summer.

Players in the AHL and National Hockey League were paid until the regular season ended.

The Rush were 29-25-5-1, good for fifth in the Mountain Division. They were two points back of the Tulsa Oilers for the final playoff spot, but held three games in hand.

Quenneville remains grateful for the role Brandon played in getting him there.

He joined the Wheat Kings in November 2013 after leaving Quinnipiac University.

Wheat Kings head coach and general manager Kelly McCrimmon swung a deal for his rights on Nov. 5, 2013 with the Prince George Cougars for a third-round pick in the 2015 draft, allowing Quenneville to join his younger brother John in Brandon.

(With Brandon’s pick, the Cougars selected Tyler Ho, who played 80 games over four seasons in the league with the Vancouver Giants and Saskatoon Blades.)

“Just to be able to come back out west and play with Johnny for almost two years, it was special,” Quenneville said. “To be able to come back and play in front of friends and family in Edmonton and Calgary in NHL rinks and have grandparents watch. Unfortunately a great junior experience finished off when we didn’t win … but it was still an incredible experience to build the organization in that direction and they eventually did win the next year.

“As an older brother I watched Johnny go through that and hoist the cup. It was special, and something I’ll never forget.”