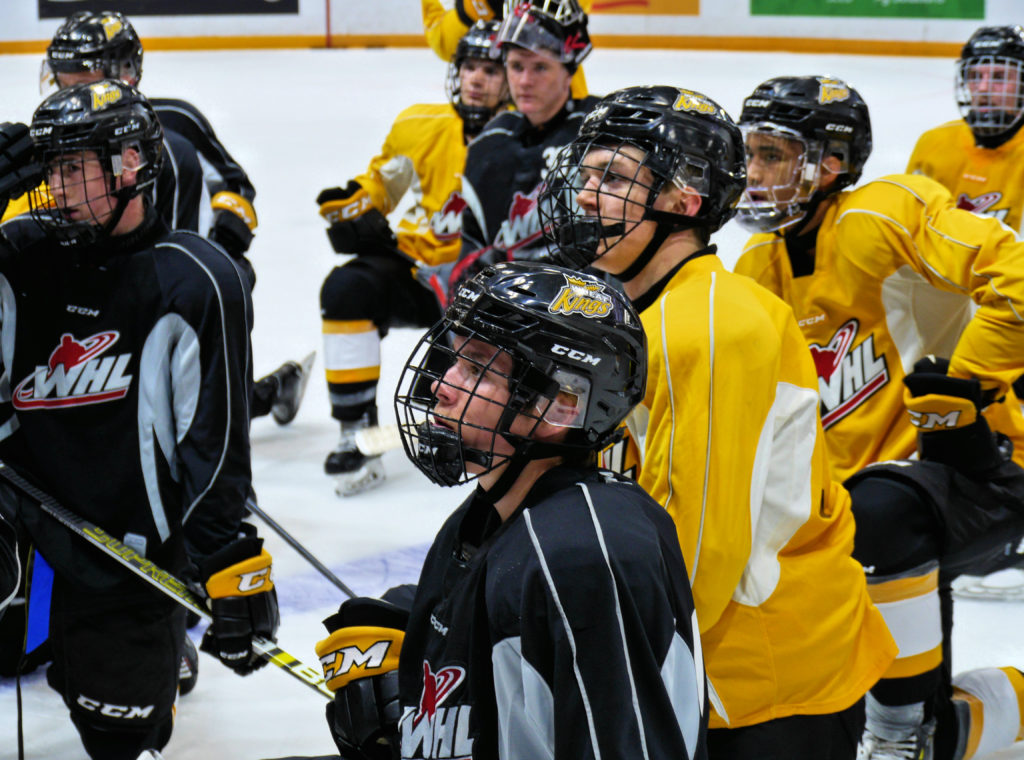 Davis Chorney is apparently good at getting noticed.

The 16-year-old forward from Nipawin, Sask., who was recently listed by the Brandon Wheat Kings, scored twice and added an assist in Team Gold’s 6-3 victory over Team Black in the intrasquad game at prospects camp on Sunday morning.

“Three weeks ago I wasn’t talking to anybody, and all of a sudden I’m here and scored a couple of goals,” Chorney said. “Hopefully I made a good impression.”

He was originally selected by the Medicine Hat Tigers in 2017, with the final pick of the draft in the 14th round, but subsequently released. The stocky six-foot, 202-pound forward spent last season with the Tisdale Trojans of the Saskatchewan AAA Midget Hockey League, and posted a hat trick in a 6-1 victory over the Manitoba champion AAA Wheat Kings at western regionals on April 6. Along with four goals at westerns and another during the Telus Cup, Chorney had 16 goals and 15 assists in 42 regular season games, with 44 penalty minutes. He also played one game with the Nipawin Hawks of the Saskatchewan Junior Hockey League.

He’s thrilled to get a chance to skate with the Wheat Kings.

“It was really cool coming in and seeing the beautiful dressing room and all of the facility stuff,” Chorney said. “Getting my own helmet and gloves to wear for the weekend was cool. Everybody fit in, and the atmosphere looks good from all the videos I saw. It’s a really good place here in Brandon.”

Jake Chiasson, Owen Weihs, Bode Hagan and Cabrel LaBossière each had a goal and an assist in the intrasquad game.

Chiasson, who was Brandon’s first rounder a year ago and has an excellent chance to crack the roster in August, was pleased with what he saw in the game during his second prospects camp.

“It was good,” Chiasson said. “There’s lots of skill in this group. It’s one of the faster games of hockey I’ve ever played in the past few months. It’s been really good.”

A product of Abbotsford, B.C., the six-foot-one, 170-pound Chiasson debuted with the Wheat Kings in Edmonton on Jan. 29 for a game against the Oil Kings. He said his prospects camp experience was much easier this time than it was a year ago.

Hagan was also in his second prospects camp. The 2002-born forward, who Brandon selected in the eighth round of the 2017 draft and has since signed, missed last year’s camp because his sister was graduating.

But after also attending two August camps, Hagan said it does get easier to get acclimated in Brandon.

The five-foot-eight, 170-pound forward from Beaumont, Alta., also made his WHL debut last season, playing in Prince Albert against the Raiders on Dec. 8, 2018. He enjoyed his return to Brandon.

“I thought it was good,” Hagan said. “It was a fun time. It’s a little bit tiring because I’m a little bit out of shape right now but it’s good to get back into the hustle of things here. It kind of gives you a little bit of a starter for August.”

The weekend featured practices on Friday and Saturday — including skating sessions with Dave Lewis and skills work with Aaron Rome — informational sessions for players and parents and a barbecue on Saturday evening.

A handful of Wheat Kings veterans, Jonny Hooker, Connor Gutenberg, Zach Wytinck, Ty Thorpe and Chad Nychuk, were involved in practice sessions over the weekend, but didn’t participate in the intrasquad game on Sunday morning.

Wheat Kings director of scouting Darren Ritchie was pleased with the annual camp, which featured 31 players born in 2002, 2003 or 2004 who the team either selected in the bantam draft or subsequently listed. “It’s a good weekend,” Ritchie said. “It’s a lot of stuff for our families to learn but it’s what you have to do. For our ’04 families, we want to get the information to them as much as we can. For our ’03s and ’02s, they’ve been here now and now they’re comfortable and understand what’s expected. Guys are better and better every time they play.”

No player signings were announced on the weekend, but Ritchie was certainly impressed by what he saw in the intrasquad game.

“It was real good,” Ritchie said. “The game was a real high pace with lots of skill, which is exactly how we want to play and what we want to look like.”