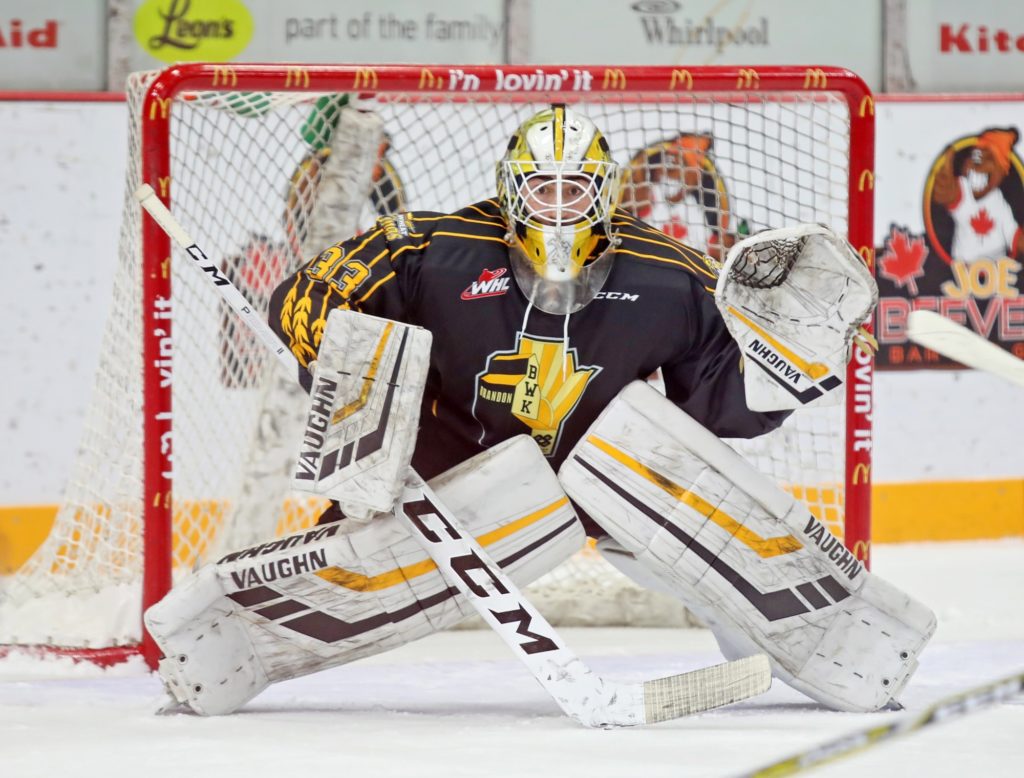 (Courtesy of Perry Bergson, The Brandon Sun) — The Brandon Wheat Kings have finally spotted the masked man they’ve been looking for.

On Monday, overage Czech goalie Jiri Patera skated for the first time at practice since he aggravated an ankle issue against the Saskatoon Blades on Oct. 6.

“It was the first practice and we’re still trying to figure out what to do and what to put on my ankle so I can move comfortably in my skate,” Patera said. “I think we have the right thing. It’s just trying to get used to it because it will obviously be a little sensitive.”

His right ankle, which used to look like it had half a tennis ball growing out of it due to swelling, is now completely normal, Patera said.

Still, the issue essentially came out of nowhere.

“It got infected after the Saskatoon game,” Patera said. “It kind of started bothering me and I could barely walk. The next day I got it drained and I thought it would get better but it was swollen again the day after. Then they figured out it was infected so they needed to cut into it and fix it.”

The surgery was done shortly after the team left for the West Coast road trip on Oct. 12. Patera was given a ride to Winnipeg and spent two nights in hospital. He was then on crutches for a week.

He said it wasn’t easy to be the only player still in town as his teammates played seven games in 11 days. But the Vegas Golden Knights prospect had plenty to do anyway.

Ethan Kruger has taken over as the No. 1 goalie since Patera’s issues surfaced, starting the last 11 games. Netminder Connor Ungar has been with the team ever since, and has made three appearances.

On Monday, all three goalies were on the ice. Patera said things didn’t feel ideal, but added that may also be due to his gear.

“It feels a little stiff,” Patera said. “I’m using my new equipment as well just to get used to it again.”

He was originally supposed to skate last Wednesday for the first time but the stitches were removed on Tuesday. He was cautioned to delay his return as a result, so he put the time to good use with Wheat Kings athletic therapist William Sadonick-Carriere.

“They said I had to wait for five to 10 more days for the holes to heal up,” Patera said. “Will was treating me every single day when I was here and I was doing my ankle exercises and working out my upper body and doing some cardio trying to get back in shape.”

With just five starts in a season that’s one-quarter done — he has posted a goals-against average of 2.77 and a sterling .922 save percentage so far — Patera is understandably eager to get his final junior hockey season back on track.

“Obviously I want to get back in the lineup as soon as I can,” Patera said. “Hopefully this weekend. I just need to get back to being co-ordinated on the ice and the habits I was doing before and just trying to get used to the ice again.”

Without Patera in the lineup or on the bench, the Wheat Kings dumped the visiting Red Deer Rebels on Tuesday. Brandon travels to Saskatchewan to play the Blades and Raiders this weekend before returning home to host the Winnipeg ICE on Monday afternoon.