ONE YEAR AFTER INJURY, RITCHIE HUNGRY FOR UPCOMING SEASON 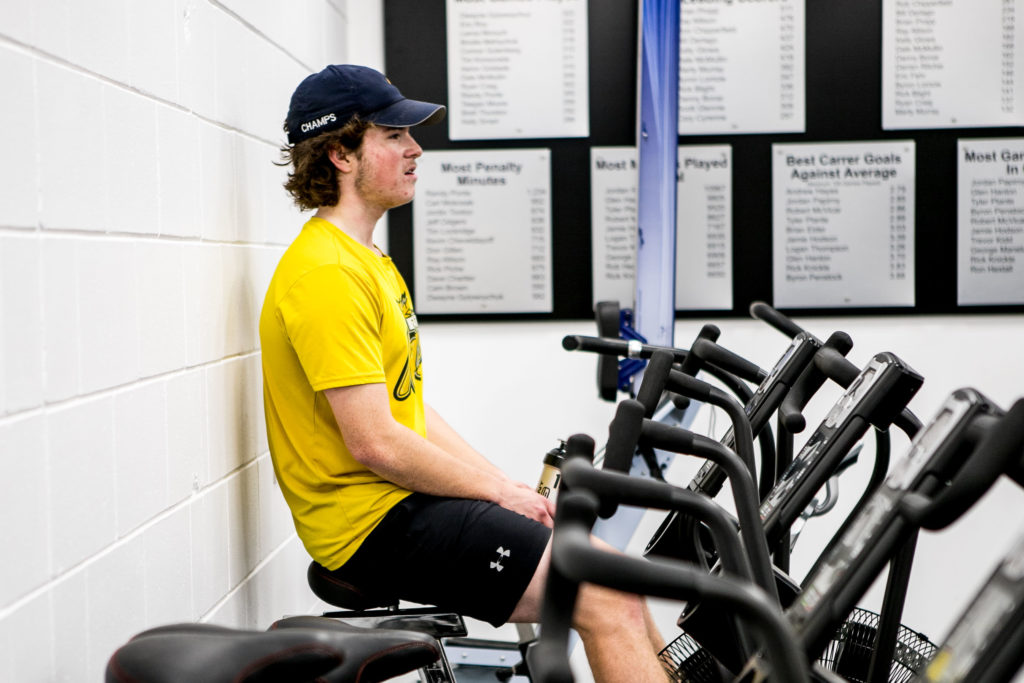 It’s been one full year to the day that Nolan Ritchie broke his femur on a seemingly harmless forecheck in Westoba Place against the Calgary Hitmen. 2019-20 was his rookie season in the Wesern Hockey League and he had already started finding success with 11 points (5G-6A) in the first 24 games of the season.

But a lot has happened since he slid into the boards, prematurely ending his rookie campaign. The current events in the world may make it feel like a lifetime ago for those involved, but Ritchie hasn’t forgotten that his less-than-desirable anniversary is here.

“I’ve been talking about it a bit, thinking about it, talking to my family about it just thinking it’s kind of weird it’s been a full year. Time has flown by.” 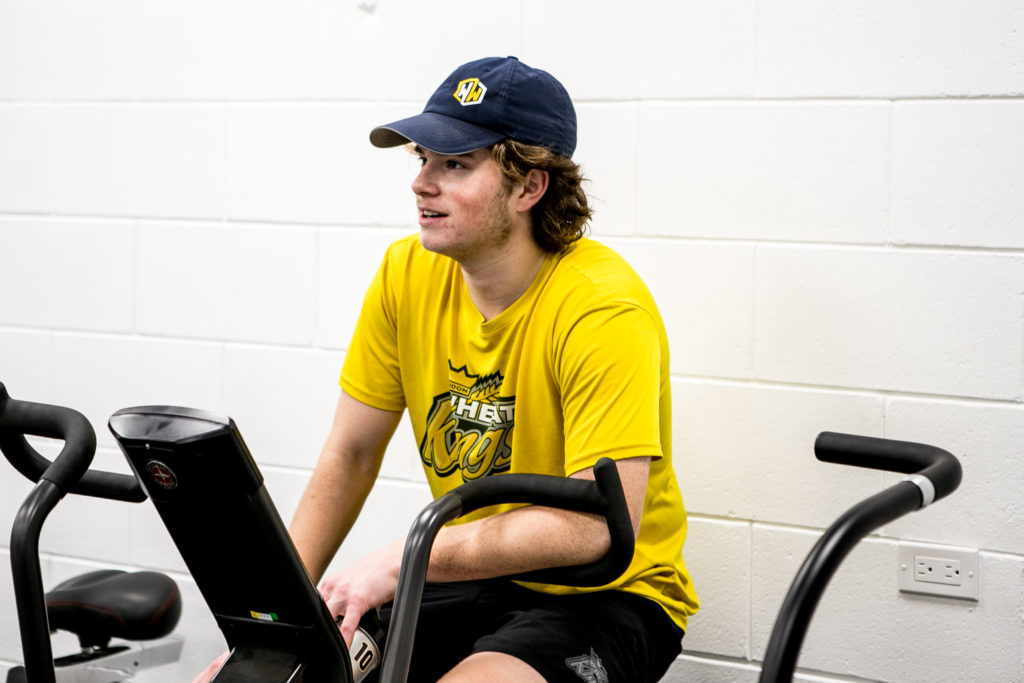 Prior to that game on November 22, Nolan’s worst injury he can think of was a sprained ankle. For an athlete that has spent as much time playing sports as he has, he considered himself pretty lucky up until that point to never be sideined with a major injury. But his inexperience with an injury like this was a good thing and from the very beginning, his only focus was how he was going to return.

“I knew right from the start that I was going to come back and be better than I was before. Right away the doctor said that it wasn’t career-ending, I was gonna be back in a little bit. Will’s helped me a lot throughout this whole process and he’s been helping me the whole time and I think I just need to keep working during this time off and keep getting back into shape.”

A socially distanced world was a challenge at times for Ritchie and his main accomplice through the rehabilitation process, Wheat Kings Athletic Therapist Will Sadonick-Carriere. Despite not always having the luxury of working together in-person, the two have worked side-by-side towards the same goal. 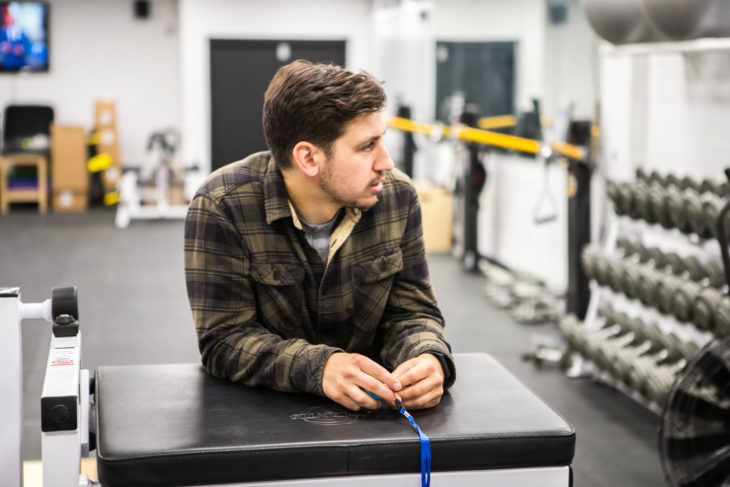 “It’s been interesting, it’s been a big learning experience for me”, says Carriere.

Carriere was also in his rookie season with the Wheat Kings last year. He joined the club in 2019 after spending time in the past with teams like the American Hockey League’s Manitoba Moose and the University of Winnipeg’s Wrestling team. His knowledge and experience are apparent and yet he also credits Ritchie’s rehab as a learning curve for both of them.

“Initially, I thought there’d be a huge mental side to it for Nolan; you know, being a kid who was on the All-Star team in Midget, being a WHL draft pick, and he was on a bit of a hot streak leading up to this. I thought it would really challenge him mentally being out of the game like that for so long but he’s taken it really well. He’s always been excited to get to the next stage.”

“He’d come in during the season and before practice we’d spend 5 minutes just trying to bend his knee. And at first it was 10 to 30 degrees and now he has a full 115, 120 degree knee flexion. So it’s been a learning experience in how the individual takes milestones and setbacks and how I navigate them. It’s not just an injury where somebody sprained their ankle, where you know sort of how it’s gonna go. There’s a fracture. There was muscle damage. There was a surgery. There’s a lot more compounding factors that go into it with this injury.”

The following night after Ritchie’s injury, the Wheat Kings hosted the Regina Pats and he watched the game from his hospital bed. After that, he was on the bench during practice and in the stands for home games for the remainder of the season. But being forced to the sideline physically didn’t mean he would take the season off mentally. He learned all that he could from his teammates and watched how the team performed with the coaching staff.

“I think just watching the guys and especially how we played during that second half, because we had a great run there in the second half, it was easy to take things from what the guys were doing out there. And obviously what the team needed to do to win, it was pretty easy to pick things out and watching every practice and being around the rink pretty much every day with the guys, it helped a lot.” 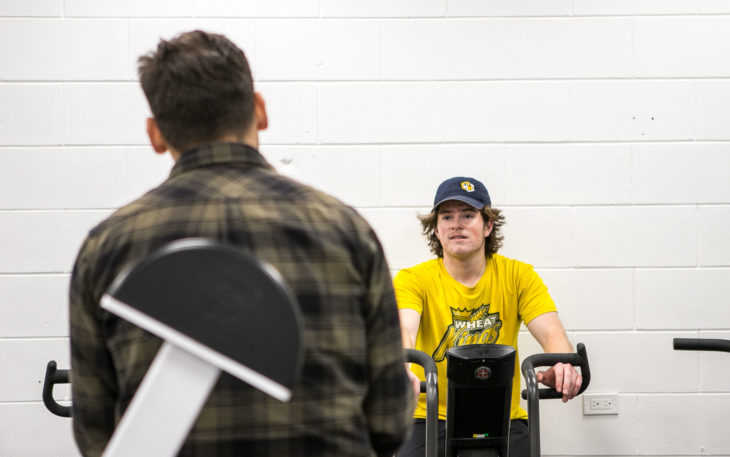 In terms of the physical rehab itself, the process of getting mobility and strength back wasn’t exactly a walk in the park according to Carriere. But much like Ritchie’s mental approach to his injury, his devotion to getting back in shape physically was just as strong.

“We used blood flow restriction rehab. It’s a method of enhancing the hormone response to the rehab work we do. It’s a painful experience, there’s no way around it. And he – 4 days a week, for 2 months – came in and said “Ok lets do it”.

After an offseason spent communicating on a daily basis, a positive side effect of the rehab has been a closer relationship between the two getting to know each other personally. They joke about Ritchie’s injury being the last time he tries to forecheck and wager on small accomplishments and larger goals in the upcoming season. In August, Ritchie won the junior division of the Tamarack Golf Tournament at Clear Lake Golf Course and Carriere followed the tournament closely as a supporter.

“I learned he’s an exceptional golfer” says Carriere, who also admits he’s picked up a few tips on his own golf game along the way.

The most important part is that they both agree that Ritchie has returned to form and that he both looks and feels 100% a year after his injury. An experience that forced them to get to know one another better than ever before has resulted in an even bigger determination for the upcoming season.

“I think he was mentally tough before, he’ll be tougher now” says Carriere. “Physically, we’ve worked on his rotational power, his upper body strength. He was never the biggest or quickest kid so we’ve really pushed that he doesn’t lose any speed and now we’re trying to gain speed based off what he had before. He’ll definitely be hungrier than he was before”.