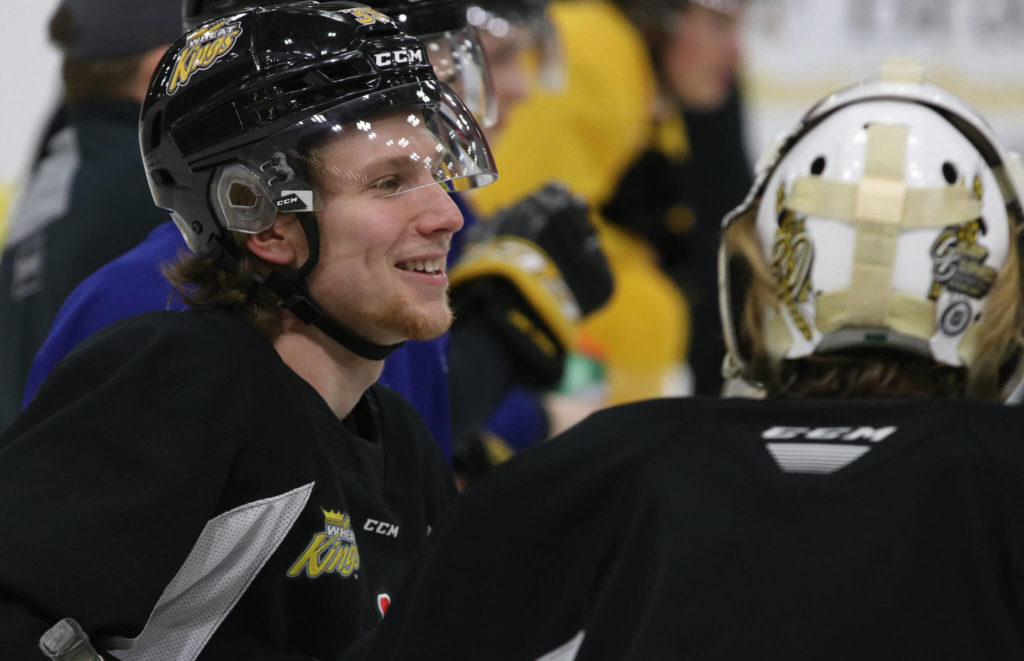 Chad Nychuk’s Western Hockey League career is over, and all that remains is gratitude.

The six-foot-one, 194-pound Rossburn product, who went undrafted by the 22 Western Hockey League clubs in 2016, graduates after four seasons with the Brandon Wheat Kings as an alternate captain and first pairing defenceman.

“If you would have told me that Thursday in May (2016) that I didn’t get drafted that I would end up playing four years with the Brandon Wheat Kings, I probably would have told you to go kick rocks,” Nychuk said. “I think I’ve grown up here. I’ve met a lot of guys that I’ll be friends with for the rest of my life. I’m really grateful.”

Nychuk made his WHL debut on Dec. 12, 2017, one day after signing with the Wheat Kings. After three games, he returned to the Manitoba AAA U18 Hockey League with the Yellowhead Chiefs, was named a first-team all-star and tied for 14th in league scoring with 61 points in 47 games.

He earned full-time work with the Wheat Kings in the 2018-19 season — his 17-year-old campaign — but was a healthy scratch more than a dozen times. In 53 games as a WHL rookie, Nychuk had three goals, 10 assists and a plus-minus of +3.

Happily for Nychuk, he didn’t go through the experience alone. In one of the more unusual blue-lines in recent Wheat Kings history, he was joined on the blue-line by fellow rookies Neithan Salame, Jonny Lambos and Vincent Iorio, the latter of whom was a year younger.

“It’s pretty unheard of to take four rookie defencemen the way we did that first year,” Nychuk said. “Obviously we didn’t make the playoffs but at the same time, the future was exciting. In my 18-year-old season we were a very good hockey team and in my 19-year-old season, the same thing. Jonny, Sal, Vinny, I’ll talk to those guys for the rest of my life. It’s nice.”

He also became very close with the man he was tasked to guard, goaltender Ethan Kruger. The pair played together for four years and graduated as overagers this week.

Off the ice, the transition was seamless.

He lived with his uncle Al Luhowy in past seasons but this year shared a condo with his cousin Sydni Belinsky, the sister of former Manitoba Junior Hockey League player Mackenzie.

“That was one of the cool parts,” Nychuk said. “Living close to Brandon, you know a lot of people here so it was cool getting them to watch. I had buddies texting me quite often trying to get a ticket or something but at the end of the day, that was one of the best parts of it all.”

The team’s other graduating overager, Finnish forward Marcus Kallionkieli, said Nychuk was a terrific presence in the dressing room as well.

“Chad is a great teammate,” Kallionkieli said. “He always has a smile on his face. He’s a great guy.”

In 63 games in the 2019-20 season, he contributed seven goals and 32 assists with a +12 rating. But that was also the season that was paused in March and later cancelled due to the pandemic.

The oft-delayed 2020-21 season eventually turned into a 24-game campaign for the East Division in the Regina hub, with Nychuk contributing two goals and 16 assists in 23 games.

“It was very frustrating,” Nychuk said. “Obviously when you’re a younger guy, 15, 16, you still have a long time. For me, we were supposed to be good for my 18- and 19-year-old seasons, that’s what we were building for. That was definitely the most frustrating thing.

“Coming into this year, I tried to put my best foot forward and just enjoy it.”

Nychuk has easily made the most dramatic improvement in his skating in recent Wheat Kings history. When he joined the club, his stride wasn’t ideal but it’s gotten better and better, to the point that he’s making plays all over the ice.

“I still have a lot of work to do with my skating but coming in at 16, that was definitely one of the things I heard a lot about,” Nychuk said. “I was just working on it and getting bigger and stronger. I definitely improved on that a little bit.

One reason for the change was insoles he wore in his skates — they came from skating coach Patty Hole — but he didn’t wear them this year.

It was the ability to get up the ice and join the rush that led to an incredible offensive breakout this season.

In 64 games, he scored 21 goals, including eight game winners, and added 50 assists. He also tied captain Ridly Greig with a team-high plus-minus of 26.

He scored four overtime goals during the season but wishes he had saved one for Brandon’s season-ending, triple-overtime loss to the Red Deer Rebels on Sunday.

“I’m not necessarily known for scoring that many goals but this year that was part of my role,” Nychuk said. “In terms of that it was obviously exciting but that triple OT one would have been nice. I would trade them all for that one.”

When the goals started going for Nychuk this season, the team’s former broadcaster, Branden Crowe, coined the nickname “Rossburn Rifle” for Nychuk and the Wheat Kings even had T-shirts made.

Nychuk chuckled when asked about it.

“When he first told me about it, I was ‘OK, whatever, we’ll see how this goes,’” Nychuk said. “Then when I saw the T-shirt, I’m grateful that Crowey did that for me. I was getting a lot of Snapchat pictures of my buddies wearing them out and about. That’s something I’ll remember for a long time and I have to thank Crowey for that.”

But that didn’t make his final season an easy one. The short-staffed team was perpetually missing players and the youngsters had to step up.

“At the start of the year, it seemed like we just couldn’t catch a break,” Nychuk said. “It was very frustrating. We were losing games, we had so many guys out of the lineup but at the end of the day, that’s hockey. You have to learn from what you’re given and it made us all better players. It’s really unfortunate it went down like that.”

Nychuk finally had a taste of the playoffs in his final season, and he enjoyed it just as much as the thousands of fans who attended each of their home games.

He wanted to send a message to the team’s supporters, who he played in front of for three seasons.

“Just thank you,” Nychuk said. “These playoff games were really intense and they were right there pushing us. That’s the loudest I’ve heard this building since I’ve been here.”

The playoff games also helped cement some of the enduring memories he built over four seasons. There were certain things he’ll never forget that he thinks he’ll keep in the long term.

“It’s the teammates and friends I’ve made,” Nychuk said. “That’s the main thing. Sal, Vinny, Rids, Krugs, Jonny, that will be the one thing I remember the most. The games are fun. These playoff games we just played were some of my favourite hockey games I’ve played in my career.”

While his junior career has ended, his hockey career certainly hasn’t.

Nychuk is hoping to land a pro deal for next season, but hasn’t ruled out taking advantage of the WHL scholarship and attending school.

“Right now it’s just a lot of mixed emotions,” Nychuk said. “Saying goodbye to everyone, coaches, staff, all my teammates is tough but at the end of the day you can only do this for so long.

“It’s time to grow up and move on to the next thing.”