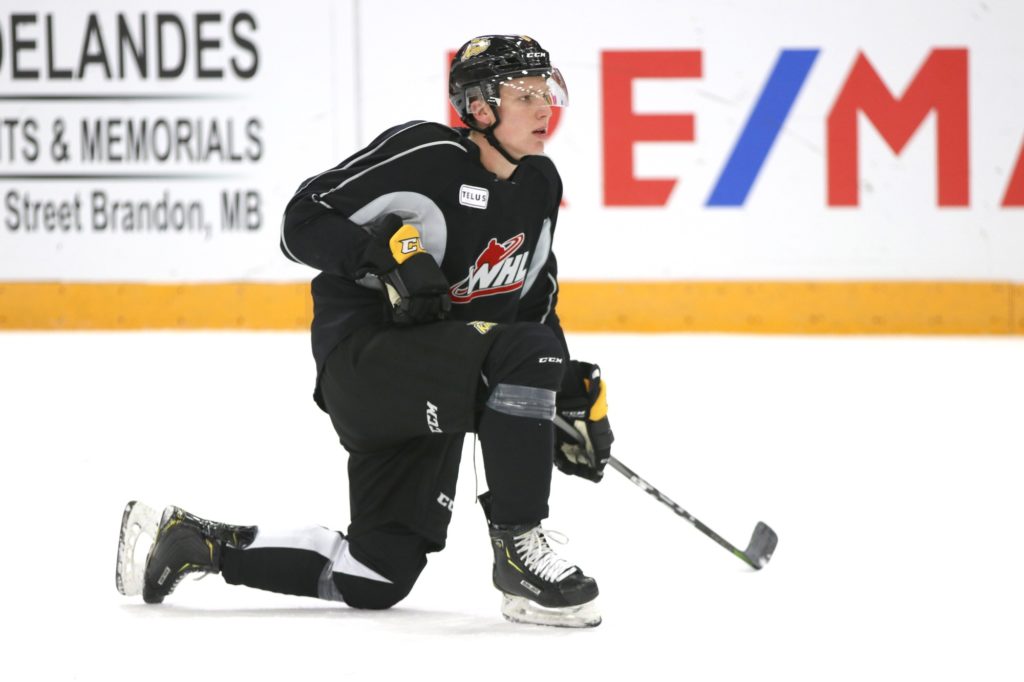 The 18-year-old Brandon Wheat Kings defenceman from Rossburn steadily improved a year ago as a rookie, and is eager to help his team by making bigger gains this season.

“It has been good so far,” Nychuk said. “I definitely have more to offer though, just like everyone. You have to keep getting better. The season only gets harder, so I have to keep going with my game and taking it to the next level.”

In 53 games as a Western Hockey League rookie, Nychuk scored three goals and added 10 assists. He has nearly half of that production in nine games this season, with a goal and four helpers already.

After being a healthy scratch more than a dozen times his first season, he simply wants to stay in the lineup this year.

“It’s taking care of your body,” Nychuk said. “You don’t want to be tired. Last year, being out of the lineup, those are nights off almost and I didn’t like it and don’t want to go back to it. Hopefully I’ll never have to.”

Nychuk and the Wheat Kings swing back into action tonight when they face the Tri-City Americans in Kennewick, Washington.

Brandon is currently 1-2-0 on its 7-game road trip that began last week in Everett.

Nychuk could be one of the keys to Brandon’s suddenly toothless power play returning to life. He’s excelled on the man advantage in the past.

He made his WHL debut on Dec. 12, 2017 after signing with the Wheat Kings. After three games, he returned to the Manitoba U18 AAA Hockey League with the Yellowhead Chiefs, was named a first-team all-star and tied for 14th in league scoring with 61 points in 47 games.

“The team relies on our power play and I have to be on my game 100 per cent every night,” Nychuk said. “I’m just trying to keep focused on staying at that position and succeeding.”

A good summer certainly didn’t hurt those chances. The six-foot-one, 188-pound defenceman is 16 pounds heavier than when he reported to Wheat Kings camp in 2018, and noticeably thicker.

He trained five days a week with his uncle Al Luhowy, who he also billets with during the winter.

“He pushed me every day to get bigger,” Nychuk said.

He also spent lots of time on the ice, although a big difference in his skating may come in an unusual way.

“I got insoles in my skates from Patty Hole, who is my skating coach this summer,” said Nychuk, who said he has flat feet. “She said it would help a lot. I tried it out and for the first few weeks it was just killing my feet but I think I’ve somewhat improved on my skating this summer.”

The biggest difference seemed to come after Christmas in his rookie season. As Nychuk gained confidence, his played noticeably improved late in the season.

“Getting past that Jan. 10 trade deadline and knowing that I was going to be sticking around was a huge momentum swing for me,” Nychuk said. “I felt like I had a good second half of the year and I’m looking to build on that.”

He said the greatest growth in his game has come in his own end.

“I’ve been working hard on it,” Nychuk said. “Of course I can always get better but coming from midget, I didn’t focus too much on my D-zone, and playing here you’ve got to. That’s how it is here and in this league. I took a step that way.”

Nychuk said it’s taking time to incorporate the new systems of head coach Dave Lowry, noting the team learned a lot in the couple of weeks before it headed on the West Coast trip.

He said wins at home over the Vancouver Giants and on the road over the Saskatoon Blades showed the players that they can compete with the top teams in the league.

Nychuk said another intangible will help the Wheat Kings as well.

“I think we’re a lot more gelled this year already than last year,” Nychuk said. “We’re playing for each other as compared to last year, when maybe we were just playing to play. This year I think our team is a lot more intertwined, I guess you could say. It’s been great so far.”