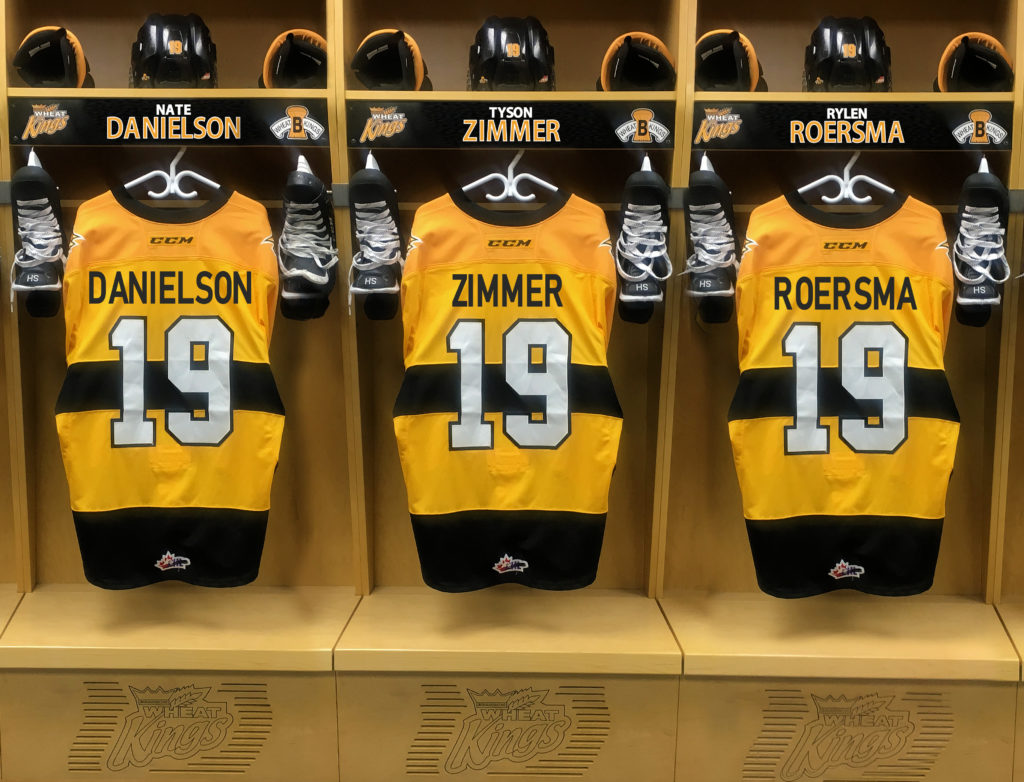 The BrandonWheat Kings have locked up a giant piece of their near future, signing their top three picks in the recent Western Hockey League bantam draft.

The Wheat Kings took centre Nate Danielson of Red Deer, Alta., with the fifth selection, winger Tyson Zimmer of Russell sixth and centre Rylen Roersma from Raymond, Alta., 16th. None of the young prospects are eligible to earn a full-time spot with the team until the 2020-21 season.

Wheat Kings director of scouting Darren Ritchie was delighted to announce the three signings, which came after the team held its annual prospects camp last weekend.

“It’s real exciting for the organization to get three quality players and great families to be a part of our organization,” Ritchie said. “For us, it’s a great day. We look forward to them growing in our organization.”

It’s potentially a big win for the Wheat Kings, who suffered some immediate pain in the 2017-18 season for what could prove to be a massive future return.

The first of the picks was utilized in the 2018 bantam draft when a second-rounder from Moose Jaw was used to pick Edmonton forward Brett Hyland.

This year, Danielson came courtesy of Victoria’s 10th overall pick, which was flipped at the draft on May 2 in Red Deer to the Kelowna Rockets with the rights to defenceman Sean Comrie of Edmonton for the Rockets’ fifth pick.

Comrie, a 2015 bantam draft selection by Brandon who suited up for the University of Denver and appeared unlikely to report to the Wheat Kings, has since signed in Kelowna.

The highly touted six-foot, 160-pound Danielson had 26 goals and 23 assists in 29 games playing bantam hockey in Red Deer last winter. He was happy to sign immediately with the Wheat Kings.

“The WHL has always been where I wanted to play since I was a little kid,” Danielson said. “Once I got to Brandon and saw the organization, I really liked it and just wanted to lock it down.”

Zimmer was then chosen next with Brandon’s own pick.

“I think it was an easy one for me and my family, especially being close to home,” Zimmer said. “Growing up here, there are a lot of good things about the organization all around. It’s an amazing organization so I thought I would put pen to paper.”

The five-foot-10, 168-pound forward very briefly considered the college route, but ultimately it was an easy decision.

“It’s been a dream of mine ever since I was a kid to play in the WHL,” Roersma said. “When the opportunity came across, I didn’t hesitate whatsoever. The whole organization, the Brandon Wheat Kings, is such a high-end program. I couldn’t be happier with the organization and how it all went down last weekend.” That wasn’t all for Brandon at the bantam draft.

At the 2019 trade deadline, Hartje was dealt to the Kootenay Ice, who now play out of Winnipeg, for a 2019 third-rounder the Wheat Kings used to pick defenceman Owen Harris of Wawanesa. In total, they selected 10 players.

The Wheat Kings still have firstround picks from Moose Jaw and Victoria in 2021, which could be used to select more prospects or to acquire players through trade.

The team’s prospects camp last weekend featured the team’s 2002- born prospects, who will be entering their 17-year-old seasons, along with the 2003- and 2004-born players.

“It’s pretty exciting to know that in two or three years that those are going to be most of the guys that I’m playing with,” Danielson said. “I was pretty excited about that. There’s a lot of talent there and a lot of potential.”

“There a obviously a lot of talent at this prospect’s camp last weekend, so seeing that and how it could be in a couple of years, it’s going to be a great team,” Zimmer said. “It was great to see.”

Brandon is traditionally one of the last teams in the league to stage its rookie and main training camps, taking to the ice in the final week of August. Roersma, who had 23 goals and 21 assists in 29 games last season, is eager for it to come after what he considered a terrific first experience last weekend.

“I can’t wait to see what the future has in store,” Roersma said. “There is so much talent coming into the organization and it’s just fantastic to see all the skilled players who are out there and coming to the Brandon Wheat Kings. More importantly, there’s just a great bunch of guys who are coming to the organization who are great people to talk to. They’re all very nice kids and I’m just really happy with everybody who was there.”