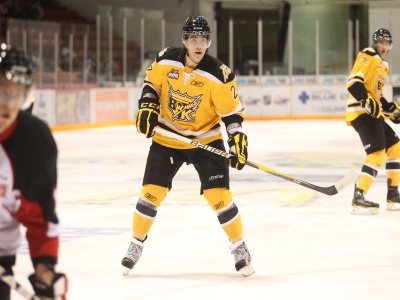 Brandon, MB. – The Western Hockey League’s Brandon Wheat Kings, in association with TELUS, will be giving fans the opportunity to win a Michael Ferland bobblehead at this Friday’s game against the visiting Calgary Hitmen.

The first 3,000 fans in attendance will have a chance to take home one of 1,500 bobbleheads, featuring the likeness of the former Wheat King great!

Western Manitoba hockey fans attending the game will receive a one of two “colored” cards when they enter the arena. A contest will then take place during the opening period to determine what colored card will earn them one.

Friday’s game will be the fourth and final game of a 4-game home stand for the Wheat Kings, who enter the week riding a season high 6-game winning streak.

During his WHL career, Michael appeared in two Memorial Cups – 2010 with Brandon and 2013 in Saskatoon.

Chosen by the Calgary Flames in the fifth round (133rd overall) in the 2010 National Hockey League Entry Draft, Ferland has appeared in 335 NHL games. In addition to the Flames, he has seen action in both Carolina and Vancouver.

After signing a multi-year contract with the Canucks last summer he has scored a goal and five points in an injury shortened season that has seen him play fourteen games.

His best NHL season came two years ago when he scored 21 goals and 41 points in 77 games for the Flames..

Friday’s game will feature the first of two bobblehead giveaways this season.

In early February, 1,000 fans will take home a Hockey Night in Canada bobblehead, presented by REMAX.

Tickets to Friday’s game as well as this Wednesday’s contest against Prince George are on sale now at the Keystone Centre box office. Fans can also order online at keystonecentre.com or by calling (204) 726-3555.