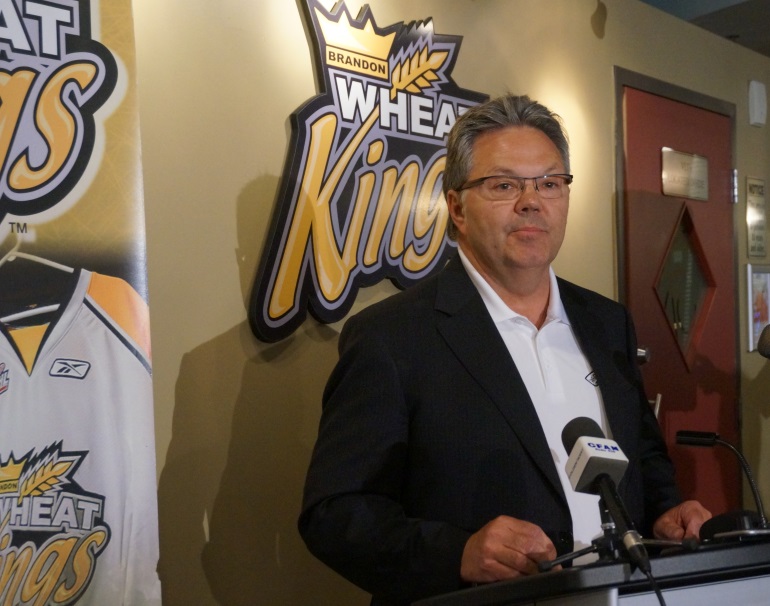 (Courtesy of Perry Bergson, The Brandon Sun) — The Western Hockey League is targeting Oct. 2 for the start of its 2020-21 season.

The league announced this week that committees have been set up in Manitoba, Saskatchewan, Alberta, British Columbia, Washington state and Oregon, which all have WHL teams, to discuss the issue with governments and health authorities.

Brandon Wheat Kings owner Kelly McCrimmon, who noted Manitoba has done a good job of reducing the spread of COVID-19, was quick to stress that Oct. 2 is just a starting point.

“We’re hopeful that children will go back to school in the fall, which again is one more layer of normalcy, and that Oct. 2 is a date that we can make happen,” McCrimmon said. “We don’t know that for sure. No one does. I personally felt it was important that we pick a date to work towards to give a little bit of clarity to our players and our fans to know what we’re working towards. We’ll see if we get there.”

“We are just committed to start playing as soon as we possibly can, and in a safe, responsible way,” says WHL Commissioner Ron Robison. “We’re going to need to certainly be flexible from a scheduling point of view, so stay tuned. We might have a completely different looking schedule than we traditionally have, with more divisional play. Is it something we’re considering? Absolutely.”

The WHL was forced to cancel the end of its 2019-20 regular season and playoffs in March due to the outbreak.

He said it’s possible if one area was weeks away and everyone else was clear, they could schedule around that issue, but it’s not an ideal solution.

“Our position is that we want all the jurisdictions up and running with access to the training facilities and obviously the ability to play home games,” Robison said. “That’s going to be critical and of course, we look at different jurisdictions and we understand that there is a different reopening schedule, if you will, in those locations … Our commitment is to adjust our schedule to a later start date if necessary to accommodate those jurisdictions.”

Training camps will likely begin about two weeks before the regular season, although that window will be shortened if play doesn’t begin until December or later.

The league may provide training opportunities where players live if there is a delayed start.

Perhaps the biggest issue the WHL faces is the varying abilities of the six provinces and states to combat COVID-19.

The challenges include moving players back and forth across the border, testing protocols and how a potential outbreak would be handled.

There’s also the question of how willing parents might be to ship a teenager from a small community with no cases to a location where the coronavirus has been more active. For instance, the Seattle Thunderbirds are situated in King County, which has nearly 9,000 COVID-19 cases.

McCrimmon, who along with spending decades in junior hockey as an executive and owner is also the father of a former junior hockey player, son Mickey, understands the situation. He said the league needs to closely monitor the situation from a safety perspective.

“Until there’s a sufficient comfort level there, that it’s a safe environment, then there is no hockey,” McCrimmon said. “That’s just one of the unfortunate realities that we’re dealing with. As I’ve said from the outset, this is a worldwide pandemic. The health implications on society far outweigh any of these discussions that we’re having in respect to return to play.”

McCrimmon added it’s still important to put a scenario in place in case there is progress in the next three-and-a-half months in all six jurisdictions.

It’s also uncertain how fans fit into the equation.

“The WHL is a spectator-driven league and the welcoming back of WHL fans is vital to a successful return to hockey for all 22 WHL member clubs,” the WHL statement said.

The league added it intends to play a full 68-game schedule for 2020-21 regardless of the start date. But none of that begins until the risk is greatly reduced, McCrimmon said.

“The stakeholders are the safety of the players and the safety of the fans,” McCrimmon said. “Following that is the business case for the franchises and the business case for the league. There has to be a scenario that works in each of those areas, and if there’s not, we won’t be able to begin play. We expect that it will be modified initially in terms of what we’re able to do in respect to fan capacity, the number of people in buildings that are allowed. We need to work with our facility, the Keystone Centre, but before we get to any of that, we need to work with the province and chief medical officers of the six jurisdictions that we play in.”

All three members of the Canadian Hockey League have now weighed in.

Two weeks ago, the Quebec Major Junior Hockey League targeted an Oct. 1 return. Commissioner Gilles Courteau said in a videoconference that “a certain percentage” of fans would likely be allowed in arenas.

Ontario Hockey League commissioner David Branch released a statement on Tuesday that suggested the start of their season remains up in the air.

“The OHL is looking forward to the upcoming hockey season,” Branch said on the league website. “We plan to drop the puck in the Fall and will follow the lead of government and public health agencies on when it is safe to get back on the ice. Our players and coaches are getting ready to play and our teams are working on their plans to provide the great experience our fans and the community have come to expect from OHL hockey.”