McCrimmon Discusses Life After the Sale of the Wheat Kings 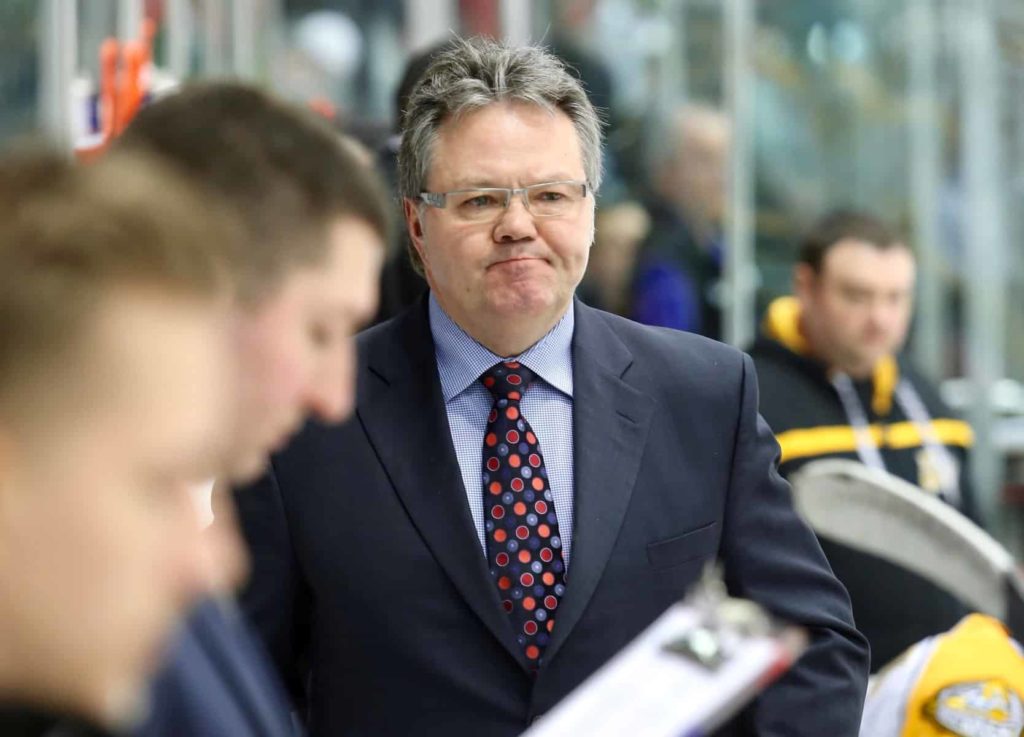 Written by the staff at www.bdnmb.com

Kelly, how do you respond when people ask about your Manitoba loyalty with player choices to your broadcast crew?

Well, for me, it all goes back to my time with the Wheat Kings and how valuable players from Manitoba were for us.  In general terms you are talking about humble hard working people, our players always had so much pride in being a Wheat King.  With the Golden Knights we have a lot of connections to Manitoba, I am guessing far more than any other NHL team.  But remember, its merit based, we can’t have players from Manitoba just to be nostalgic, they are good players, good people, and they help us win.  That’s the bottom line.  Off the top of my head, on our team now Stone, Patrick, Howden, Whitecloud, Kolesar, and then from past years two players who really meant a lot to our team, Cody Eakin and Ryan Reaves.  My connection to each of those players is different, but certainly they all have a lot of things in common, they are all Manitobans, they all grew up in the Western League, many with the Wheat Kings, and of course Zach who played MJHL in Virden with the Oil Capitals.  Its interesting watching them grow,  seeing them become husbands, fathers, all those things aside from hockey.

Further to the Manitoba ties, our Director of Player Personnel is Vaugh Karpan, from The Pas, former Wheat King and U of M Bison, oversees our pro staff.  Our Assistant Director of Player Personnel is Bob Lowes who of course coached the Wheat Kings for nine years, also a U of M Bison his responsibilities include overseeing the amateur draft.  These two are tireless workers, great at what they do, and play significant roles in the organization.   And if I keep going, former Wheat King captain Ryan Craig has been a member of our coaching staff for five years since the inaugural season.  Daren Millard, Shane Hnidy and Gary Lawless are also familiar names to Manitoba are part of our broadcast and communications team.  So to your question, yes, we do represent the Province pretty well!!

Tourism Las Vegas should be sending you a cheque, as travelers do marvel at how you go out of your way to invite people to games and tour the facility at T Mobile where the Golden Knights play. This must be a huge sense of pride for you?

Pre pandemic there were always people from Brandon at our games, hopefully we get to a point where we can do that again.  You’re correct, I am proud of everything we have done in Vegas, our team, our facilities, the fan experience, the success, but quite frankly, I am as proud that it was my time in Brandon that prepared me for this opportunity, so it is great to see people from home when that works out.

Outside of hockey what has been the biggest adjustment for you and your wife Terry?

Well, the biggest adjustment is everything non-hockey related, seeing family, being at home, it’s been a real change in our lives that way.  Las Vegas is a really easy place to live, I say every time I am asked “what is it like living in Vegas” my reply is the same, “the exact opposite of what you think.”  When you come for a visit you never leave the Strip, when you live here, you rarely go to the strip.  If you have friends or family in, well it’s the entertainment capital of the world, so lots of great choices for things to do.  Our players all live in a master planned community called Summerlin, our practice rink is there, our offices as well, every thing we do but play our games we do in Summerlin, we wouldn’t have a player who lives more than 10-15 minutes our practice facility.  On game nights we travel to the Strip, roughly 20 minutes, even then our parking area is on the side of the building not on the Strip, so you are in and out, no traffic, so easy.  Players really appreciate that.  The weather is very nice, with the exception for me at least, the summers are extremely hot.  In a normal year, not the case the last two summers, I work from Brandon in July and August, and there is nothing better than a prairie summer so Terry and I really enjoy that, going to Clear Lake, spending time together with family and friends.  In the summer of 2020, with our playoffs being played in the bubble in Edmonton, I left Brandon at the start of July, left the bubble the start of October, so for example that summer, almost no time at home.  Last summer was a little better but because the season was later, followed by the draft and free agency being later, I never got home until August 1st.  In season, I would get home likely in the neighborhood of once a month.  Brandon is home for Terry and I, that won’t change.  Chelsea and Landon are there, Micky and Kelly are in Winnipeg, and now our first grandchild, McCoy is there also, we love Manitoba.

Mick, your son, is part of your pro hockey scouting staff, how has he embraced this opportunity?

Mick has really enjoyed  working with the VGK.  He reports directly to Vaughn Karpan who as I mentioned oversees our pro scouting staff and is a great mentor to a young scout.  That group is made up of 6 scouts who all have a group of NHL teams and their American Hockey League affiliates, that they are responsible for.  So in Mick’s case, he has Winnipeg, Ottawa, Montreal, Toronto, Buffalo, Boston, Tampa and Florida that he covers, he designs his schedule to have coverage on those teams and reports on them.   Our pro staff comes to Vegas regularly for meetings, so I get to spend time with Mick in that setting which I enjoy, they have a really important role at the trade deadline, or any trade actually, and then again are instrumental with free agency.

Terry and I are really happy for Chelsea too, she has just opened her yoga studio, Luna Muna and has been able to turn her passion into a business as well, just as I did.

Finally, the Wheat Kings were your baby for years, do you ever suffer from sellers remorse?

Well, the best question last.  The Wheat Kings were a way of life for Terry, Chelsea, Micky and I.  Our kids were raised here, Terry is from here, I loved everything about being involved with the Brandon Wheat Kings and working with players that age.  There was a lot of sacrifices made by my family with the amount I worked, the time away and the commitment required.   Really any of the success along the way is special because of who you share it with.  And in the challenging times, it’s those same people that get you through.  That is what the Wheat Kings always felt like for me, it was the same for my family.

To have had the opportunity to become the GM at 28 years of age just doesn’t happen very often, and it was Bob Cornell who gave me that opportunity.  It was also Plumber who brought me into ownership three years later selling me 1/3 of the team and then in 2000 sold Terry and I the rest of the team.  When he sold me 1/3 of the team, we were coming off a season where we had won 11 games, the year before we had won 18 games, I was 31 years old, but he had that faith in me, I think first and foremost because I worked hard, just like he did.  He was a great friend, a great mentor, just one of those special people you sometimes come across.  He was great to our family, I could not and would not have had the success I have without him.

I grew up on a farm, we always intended to farm right up until we bought into the team.  I always felt farmers had the hardest time selling their farm because of the blood sweat and tears that go into it, and the attachment you have to it.  That’s how we always felt about the Wheat Kings, it was our “farm.”  So, after running the team for 27 years, then getting the opportunity to work in the National Hockey League, we still wanted to own the Wheat Kings.  In May of 2019, I was promoted to General Manager of the Knights, and along the way Terry and I talked about what the succession plan would look like which a business owner our age has to do.  We really didn’t see a path we wanted to go down.  Junior hockey is hard work, I put my heart and soul into it, I always believed that’s how it had to be if you wanted good teams, and you wanted a good business.  Then the pandemic came, and that year I was home from mid March and pretty much worked from Brandon until we resumed in early July.   I said to Terry “if I was 40 years old, working here every day, I’d punch the pandemic right in the nose and come out on the other side,” but that wasn’t the case.  Jared was interested, Terry and I talked about it a lot, talked to Chelsea and Micky, if anyone didn’t want to do it, we wouldn’t have done it, but I think we all agreed maybe it was the right time.  I had a lot of sleepless nights, literally waking up in the night worrying if we were doing the right thing, especially when I got to the bubble in Edmonton where you couldn’t even talk to family face to face.

So, we moved ahead with the sale, it was approved by the WHL Board of Governors in September 2020, I did the call from my hotel room in Edmonton, and that was tough.  You have developed so many relationships over that many years, and its such an interesting dynamic, because you’d do anything you possibly could to beat them, in a game, in a playoff series, at the Bantam Draft, in a trade and yet you’re partners in the business of running the WHL.  Plumber used to say, and he was involved in the WHL many years ahead of me, “enemies on the ice, partners in the boardroom” so that part was hard saying good bye.

All of that said, and this is the best part, Terry and I were almost instantly once the sale was complete, so at peace with it.  I never expected that.  We don’t have sellers remorse, we are really happy Jared has the team, we know it will always be in Brandon, and we know he will be a great owner.  He will do some things differently than I did, but that’s a good thing, change is good, and now with the pandemic, change is a necessity, it will be a new landscape for Junior hockey operators.  Jared and I have an agreement where I will stay on three years as a consultant, and that keeps me involved which I enjoy. So after a really restless summer, we were really happy that it worked out the way it did.  We are really proud of the Wheat Kings and the City of Brandon and so fortunate to have been able to enjoy it the way we have.