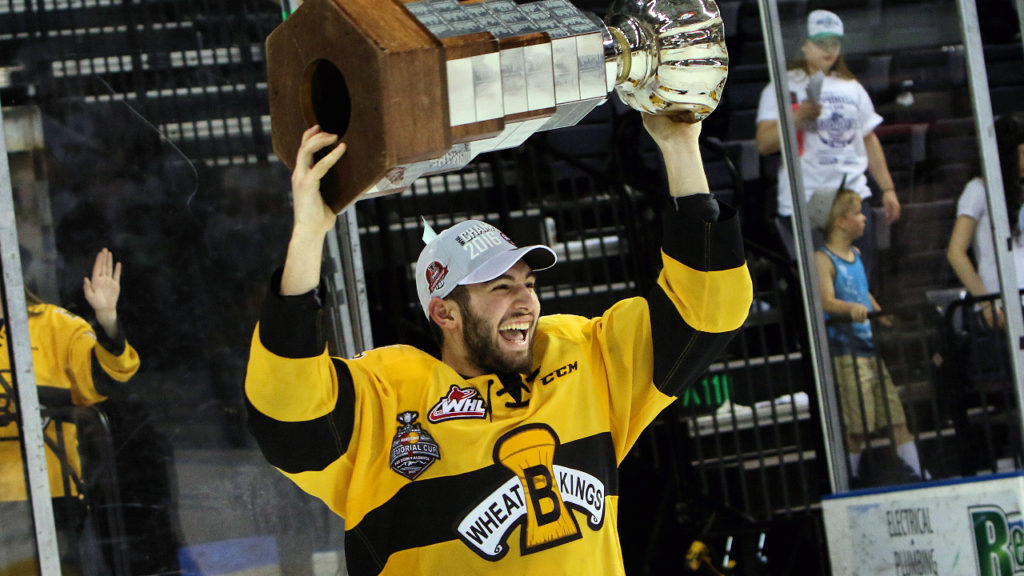 The Brandon Wheat Kings forward turned 18 last Wednesday, had a terrific showing at the National Hockey League combine earlier this month, is set to graduate high school this week and will almost certainly be chosen in the NHL draft in Chicago on Friday or Saturday.

“I’m excited for everything that’s coming,” Mattheos said. “I have grad, I have the draft and all that. I just want to see what’s going to happen and how it’s going to shake out. I’m a little bit anxious and nervous.” It’s actually been that kind of year of Mattheos.

The Winnipeg product, who is ranked 38th among North American skaters by Central Scouting, played in the under-18 Ivan Hlinka Memorial Cup last summer, scored at the Sherwin-Williams CHL/NHL Top Prospects Game in Quebec City in January and was named an alternate captain for Canada at the world under-18 men’s hockey championship in April.

On top of that, he scored 26 goals and added 36 assists in 69 games in his 17-year-old season with the Wheat Kings, a huge step up from his 30-point effort as a rookie.

“I was pretty happy with it,” Mattheos said of his second season in Brandon. “I felt like I competed and I thought that I gave it all I had. I’m not regretting anything but it’s too bad it went the way that it did for our team. I thought I worked hard.” Brandon was ousted in four straight games by the Medicine Hat Tigers in the first round of the playoffs.

Mattheos has been tagged as a can’t miss prospect since the Wheat Kings chose him with the first overall pick in the 2014 Western Hockey League bantam draft.

The first real glimpse of the player he would become occurred early in 2016 when injuries forced the team to move the rookie up to the second line with veterans Tim McGauley and John Quenneville. He thrived with the new responsibilities, and after the team became healthy again, was placed on a checking line with Tanner Kaspick and Duncan Campbell that was remarkably consistent throughout the 2015-16 post-season as the Wheat Kings won a league title.

More was expected from him in the 2016-17 season, and Mattheos delivered as a regular on the injury plagued team’s top two lines and power play unit.

“I think I became a more reliable guy,” Mattheos said. “I played more minutes, played more power play and I think I improved from all the ice time and practising. I can’t really put it in one facet of the game: I think all the areas of my game improved.” If he was looking to illustrate that to the 31 NHL teams at the combine, Mattheos certainly delivered the message during physical testing.

“I was definitely surprised with both of them,” Mattheos said of his two top finishes. “I was hoping to do well in the testing, but I wasn’t really expecting to win anything. I just tried my best.” Mattheos also interviewed with 19 teams at the combine. The interviews are an unusual process, he said.

“You kind of just wait outside and they bring you in,” Mattheos said. “You meet a bunch of new guys with every team. The first couple of days I was a little bit nervous, but after I got the first couple out of the way I felt a lot better. I enjoyed it actually.” He said the entire combine experience was fun, especially because he had no idea what to expect going in.

Now there’s nothing he can do – no more games to be played or tests to be taken – until the seven-round draft begins with the first round on Friday and continues Saturday, with eligible players born between Jan. 1, 1997 and Sept. 15, 1999.

He’s happy he has lots to keep him busy.

“There are a few weeks here of waiting,” Mattheos said. “Luckily I’ll be kind of busy with school and grad at home. I get to see my friends now that I haven’t been with for a long time, so I’m enjoying that. Then I’ll go to Chicago and enjoy that too.”