LOOKING BACK AT 1996 WHL CHAMPIONS 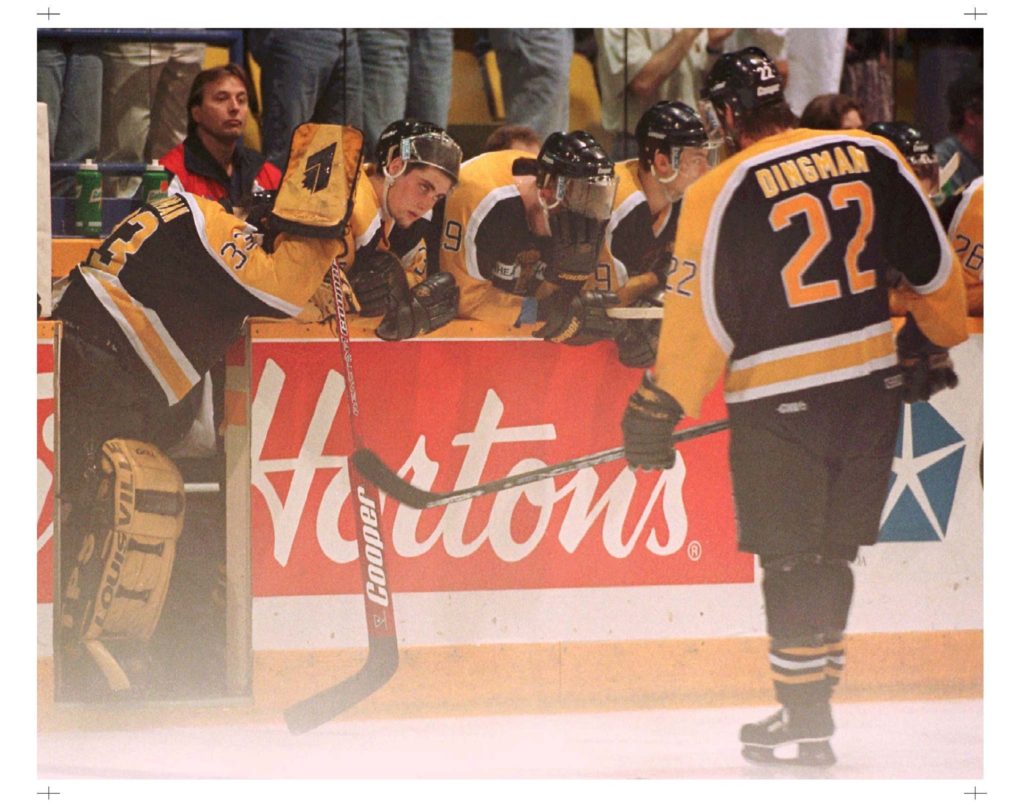 Spokane, WA. – The Brandon Wheat Kings returned to the top of the WHL heap after a 17-year absence Thursday night.

Denied a championship in the league final a year ago, the Wheaties completed their pursuit of the WHL crowd with a 3-0 triumph over the Spokane Chiefs before 10,125 fans at the Arena.

The Wheat Kings won the best of seven series 4-1 and gained a berth in the Memorial Cup tournament in Peterborough, Ontario.

Brandon’s last and only league title came in 1979. That season, the Wheat Kings made it to the Memorial Cup final only to lose 2-1 in overtime to, coincidentally, the Peterborough Petes.

“I’m not usually a guy who’s lost for words, but I kind of am now,” said Brown, who was named the playoffs’ most valuable player.

“As a 20-year old and a free agent, I couldn’t ask for anything more, except a Memorial Cup.”

Brown finished fifth in playoff scoring, while leading the Wheaties with 14 goals and 13 assists through 19 games.

His physical style also provided leadership for the club, whose superior strength was a huge factor in wearing down the Chiefs.

“As the series wore on, we wore them down,” said team captain Chris Dingman, who accepted the President’s Trophy in a post game ceremony.

“You could see tonight their (defence) was tired and they didn’t want to get the puck.”

He felt for his players, who compiled 104 regular season points to finish second overall to the Wheat Kings.

“It’s unfortunate for them that they weren’t good enough,” said Babcock. “Let’s face it, the Wheat Kings were better.”

“We’re tall, they’re big,” Jason Podollan, who finished second in playoff scoring with 33 points, had some regrets but was convinced the best team prevailed.

“They are better than us plain and simple,” said Podollan, who has signed an NHL contract with the Florida Panthers. “They were so solid defensively and (Brandon goalie) Jody Lehman was excellent.”

“I’m just wishing I was 16 and getting a taste of this for the first time.”

Brandon’s playoff experience, having reached the East Division final in 1994 and the league final last season, was quite evident throughout the series.”

And, of course, Lehman was outstanding between the pipes.

“Our goaltending was exceptional, but I thought we played exceptional defence too” said Brandon coach Bobby Lowes. “It kind of epitomized what this team is all about.”

There was no question that teamwork made the Wheat Kings nearly invincible down the stretch and through the playoffs. There were many contributors as Brandon won 29 of its last 32 games.

Vinnie Jonasson, for example, was inserted into the lineup in Game 3 of the final when Mark Dutiaume (hip pointer) couldn’t answer the call.

All he did was record two assists in a 9-5 victory Monday in Brandon, set up the game winning goal late in the third period of Wednesday’s 2-1 triumph at Spokane and notch the winner last night.

“I saw it all the way,” said Jonasson. “I knew Robs would get it to me somehow and I just batted it in.”

Wade Redden scored a powerplay goal in the second period and Mike Leclerc added insurance midway through the third.

Lehman took care of the rest, stopping Podollan on a breakaway and then Joe Cardarelli on a hard blast from the slot.