Long Wait Finally Over for Mantei 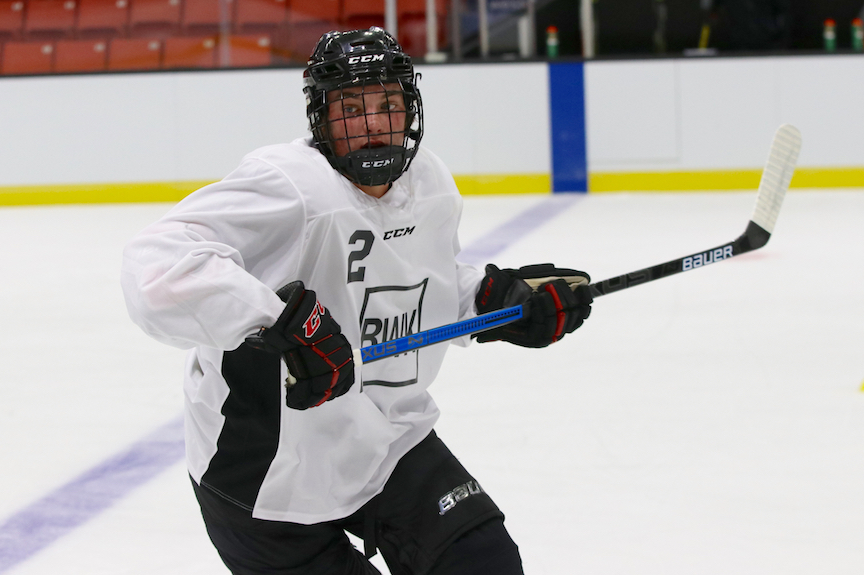 Brandon, MB – More than 500 days after the Brandon Wheat Kings made Quinn Mantei their first-round Western Hockey League draft pick, the Weyburn product is finally on the ice at Westoba Place.

The six-foot, 178-pound defenceman was thrilled his big day arrived.

Brandon grabbed Mantei with the 13th overall selection in the draft on April 22, 2020, but due to COVID-19, the organization hasn’t held a prospects camp, rookie camp or main camp since.

The young defenceman made a recent visit to Brandon with his mom to get the lay of the land and a sense of what lay ahead. He arrived in the city again last week, and was able to skate with the veterans, which was an eye opener for the youngster, who turned 16 in April.

“It’s a big step, that’s for sure,” Mantei said. “When I came off from skating with midget guys all summer to skating with Ridly Greig and Braden Schneider, it’s a pretty big change. They’re a bit quicker, bigger, stronger, faster, harder passes. Everything is just that much better.”

General manager Doug Gasper was pleased with what he saw on Tuesday and in the ice times last week from the smooth-skating youngster.

“He’s everything we thought he would be,” Gasper said. “He’s put in the time during these 18 months to get better. His skating and feet are really good. We’re very impressed with him and he’s fit in very well with us out here.”

Mantei spent last season in the Saskatchewan U18 AAA Hockey League with the Moose Jaw Warriors.

For many players, the jump from the under-15 level to U18 is a big one. Mantei had the benefit of being called up by the Warriors for seven games during the 2019-20 season, which certainly helped.

“It was a pretty big step,” Mantei said. “In my second year bantam I was able to get into a few games so that was better and kind of eased the transition. I got to know a few of the guys and the coaching staff and the systems so that eased me into it and made the transition that much smoother.

“Once I got there the guys were awesome and we had a strong team and a great group of guys and coaching staff. We had lots of fun there.”

Still, Mantei wasn’t satisfied with his contribution in the six games the team played before the season was shut down. He had an assist and no penalty minutes.

“I thought it could have been better for sure,” Mantei said. “I was just getting used to the pace of playing … I thought I was playing a lot better in the last couple of games so I was pretty disappointed that it got shut down.”

He has shown a deft offensive touch in past seasons. Brandon drafted him following the 2019-20 season when in 30 games playing AA U15 in Saskatchewan with the Weyburn Whitecap Wings — there is no U15 AAA league in the province — Mantei scored 22 goals and 30 assists, with 37 penalty minutes.

“My skating is for sure my biggest strength,” Mantei said. “I have a good two-way game. I like to jump up in the rush and be offensive and get things started from our own end and have a good first pass. I like to quarterback the power play but with all that, don’t give up much in my own end. I take pride in playing both ways.”

The East Division played its shortened season in Regina in March and April, and unlike other teams across the league, Brandon didn’t bring in 15-year-old prospects like Mantei. Instead, the organization thought it was important to show loyalty to its veterans and give them the opportunity.

Mantei understood their reasoning and is eager to make his own memories in Brandon.

“It would have been cool to play in Regina with how close it is to home but this organization has such a great history and has developed so many pro players,” Mantei said. “It’s a special place to play. The fans are great here and it’s a great city to be. Three hours from home isn’t too bad.”

He’s been sold on the organization since it first called his name. Mantei didn’t take long to sign with the Wheat Kings, committing to the club on May 8, 2020.

He has been impressed by the dressing room and rink, both of which have undergone massive changes since WHL hockey was last played in the building in March 2020.

“It’s something special, that’s for sure,” Mantei said. “It’s nothing I’ve ever seen before. It’s pretty crazy what they’ve been able to change this place into.”

Now it’s just a matter of nailing down a spot and having the opportunity to play at Westoba Place. His goals this week are simple.

“I just want to get to know the guys, get used to the pace of play, just keep up and show what I’ve got and prove that I can stay here this season,” Mantei said.

“It’s more about reps and getting the experience and just getting used to the play,” Mantei said. “It’s being able to think the game and stay up to pace with everybody else.”

He didn’t have ice in Weyburn to skate on in the summer, instead making the trip to Regina or White City once or twice a week to stay sharp. He focused on the gym and gaining weight.

He is happy to see one longtime opponent in the Brandon dressing room. The teenager grew up playing against forward Trae Johnson — another Saskatchewan product the Wheat Kings chose 22 picks after Mantei — and is relieved he’ll be a teammate in the future.

“He’s not a guy you really want to play against,” Mantei said with a chuckle. “He’s got that style of play that you want on your team and is tough to play against. It will be good to finally have him on my side.”

The task for both youngsters is shaking off nearly a year of rust to make the case to Wheat Kings brass that they’re ready for the WHL. Mantei is just happy that he’s back on the ice and will soon be skating against other teams in the pre-season.

“It’s always tough when you have that much time off,” Mantei said. “Once we finally get going into games it will be 10 months since I’ve played in a game situation. You try to keep practice as competitive as possible but at a certain point it kind of gets old. You just try to get back into the swing of things here and battle for a spot. It will be nice to finally get some games in.”