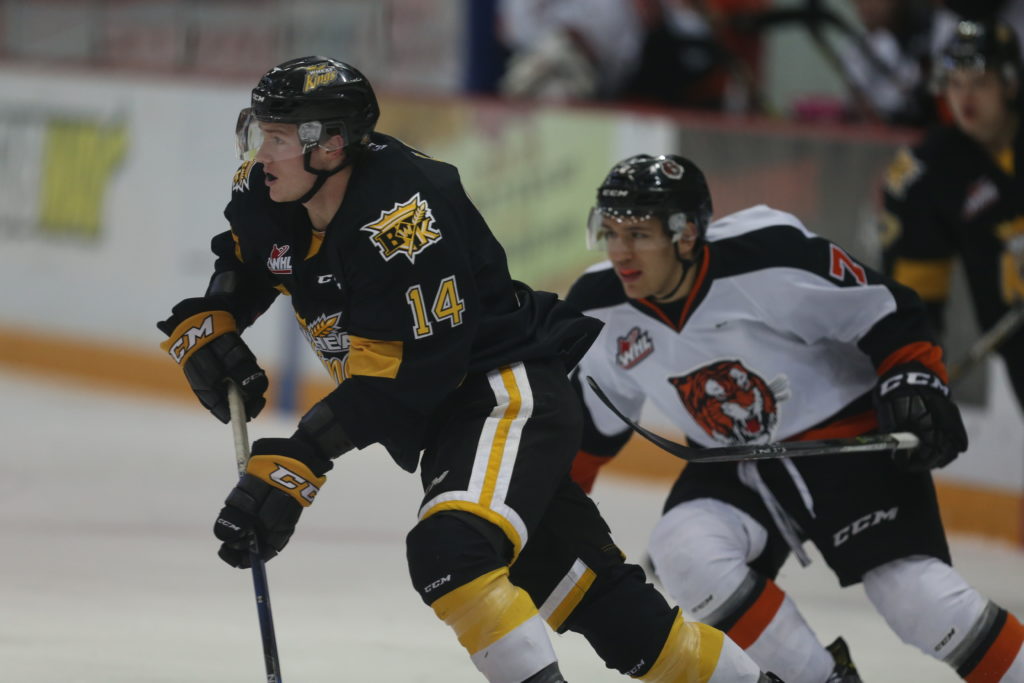 An underrated part of the self improvement Ty Lewis has undergone in professional hockey is certainly one that has his mother’s approval.

Now 22, the former Brandon Wheat Kings forward has spent two seasons on his own after living in his own home with parents Dave and Cindy during his career with his hometown team in the Western Hockey League.

“The first year was a big change for me,” Lewis said with a chuckle. “I lived at home in junior, which was nice, with my family. They treat me pretty well and were always there to support me. My mom did most of the cooking, which was nice. Living on your own comes with a little bit more responsibility, making sure you’re doing your meal prep, cooking your own meals, looking after yourself and making sure you do the stuff you need to do away from the rink.

“You kind of get used to it after while and this year was easier on that front than the year before. My cooking abilities have definitely gotten better.”

Lewis signed an entry-level contract with the National Hockey League’s Colorado Avalanche on Oct. 4, 2017 during what proved to be his final year with the Wheat Kings.

In the 2018-19 season, Lewis spent 51 games with the Avalanche’s American Hockey League farm team, the Colorado Eagles, scoring eight goals and adding 11 assists. In seven games with the ECHL affiliate Utah Grizzles, he had 13 points.

“The transition from junior to pro is obviously a big jump,” Lewis said. “Just all the older guys and the hockey is a lot better and faster and everyone is a lot smarter. It makes the game happen that much quicker. You don’t have much time to think anymore. You just have to react. It takes some getting used to but I think it’s coming and I’m continuing to get better.”

He said the Avalanche organization has been extremely helpful as he finds his way. Lewis admits a big part of that transition rests inside him.

“Confidence is always something I’ve had to battle with,” Lewis said. “Obviously when you play confident, you have a lot more success. The coaching staff in Utah was really good to me and just kind of let me play my game … My confidence was getting better, the team was winning, everything was going right and your confidence just builds. It’s something I’ve always had to deal with but I think it grew this year in Utah.”

Lewis added that a big part of creating that belief in himself is by adapting to the nature of the game he’s now playing. While he led Brandon in scoring in his final season with an even 100 points in 70 games, the challenges of pro hockey are more demanding.

Improving his size and strength are just part of the equation.

He said there’s also a much smaller margin of error, so his game must have fewer mistakes.

“You have to make smart plays,” Lewis said. “At that level, if you make a bad play it’s exposed and it transitions into a scoring chance against. In junior you can kind of get away with it at times. I’m trying to react and make the right play and limit mistakes. In the last two years I’ve learned a lot and hopefully I have a good year coming up.”

He certainly had a good one in the pandemic-shortened 2019-20 campaign, scoring 25 goals and adding 26 assists in 44 games with the Grizzlies. He had an assist in 12 games in the AHL with the Eagles.

Lewis said a few factors played into his success.

First, Utah was a good club. They were tied for second with the Idaho Steelheads in the ECHL’s Mountain Division with a record of 34-17-4-4.

Second, he said it was a good group of guys with a very good coaching staff that taught him a lot.

Third, he was on a line with a former Brandon Wheat Kings teammate.

“I was fortunate to play with Tim McGauley and Griffen Molino,” Lewis said. “I think the three of us had a real good line there and some success. We had some chemistry early on and clicked really well. Playing with guys like that who are skilled and fast makes the game that much easier. That was good experience down there and hopefully I can transition into the (AHL).”

Both McGauley and Molino finished the season in the AHL after callups, and were the only two Grizzlies players to finish ahead of him in scoring.

He enjoyed the chance to skate with McGauley again.

“It’s awesome,” Lewis said. “Timmy was a great guy in Brandon and obviously a great leader on our team that went on to win a WHL championship. It’s great having a guy like in the locker room with some experience.”

The only former Wheat Kings he played against this season were Peter Quenneville and Tyler Coulter of the Rapid City Rush.

“It was kind of fun to play against those guys,” Lewis said. “Any time we played Rapid City, me and Coults would always grab supper. It was kind of nice to see some familiar faces.”

“Even if you aren’t in touch with guys for a while, if you see someone it’s always friendly and a nice talk,” Lewis said.

Unfortunately for Lewis, he wasn’t running into some of his friends where he would normally find them.

Many of Manitoba’s golf courses just opened, so he was missing a big part of his spring routine.

He rescued the dog a year ago.

It’s more than golf courses he has to worry about these days, however.

In a world of uncertainty in which the sports community really doesn’t know when it will be allowed to resume play due to the pandemic, Lewis tries to stay positive.

“At this point I imagine hockey will be back in September,” Lewis said. “I’m trying not to worry about it too much. I’m just trying to take the time that I have to get better away from the rink. This is a huge opportunity for me to grow my strength and size and work on some weaknesses of mine.

“As much as it sucks with the season and the playoffs getting cancelled with both the Eagles and Utah pretty high up in the standings, I’m just trying to make the best of a crappy situation.”