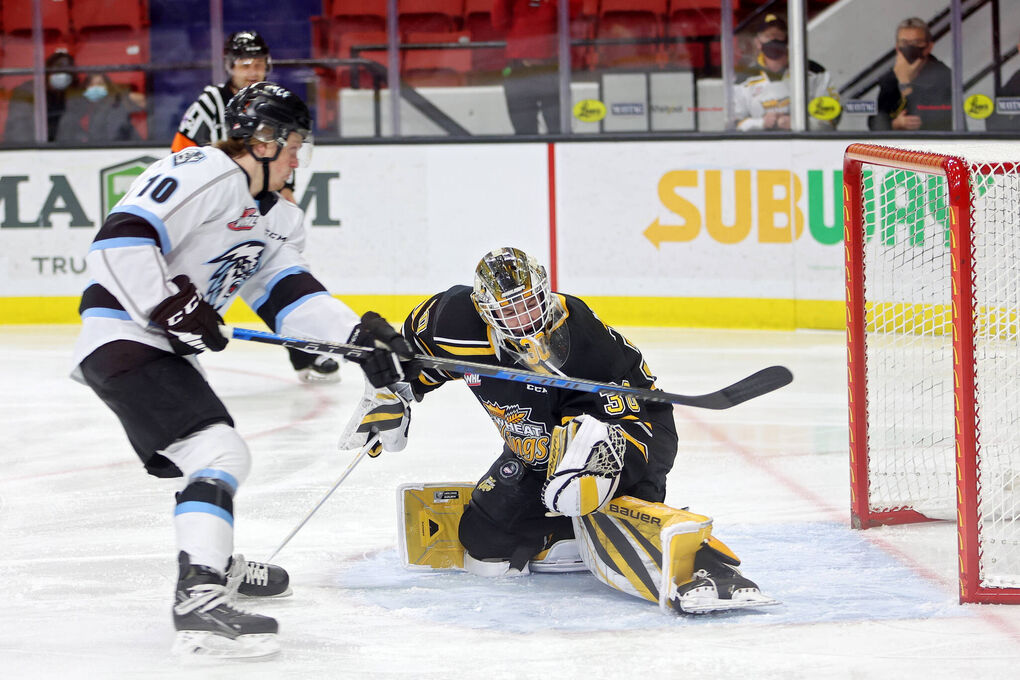 When Ethan Kruger and his friend Chad Nychuk talked about their four years with the Brandon Wheat Kings, they had trouble wrapping their minds around the fact that they had suddenly become the team’s elder statesmen.

The pair, who along with Marcus Kallionkieli had their major junior careers end with a triple overtime loss to the Red Deer Rebels on May 1, both became full-time Western Hockey League players during the 2018-19 season.

“It is weird,” said Kruger, who was picked by the Wheat Kings in the fifth round of the 2016 WHL bantam draft. “It’s nice having a guy like Chuck by my side because we went through it together. We always laugh about it, saying ‘I can’t believe this is us right now.’ We’re babysitting some 15 year olds but it’s awesome.

“I’m glad I got to have four years here, five years if you count the playoffs when I came up when I was 16. It’s just awesome to see the guys who have come through here, in and out, so many good guys throughout the years.”

The 20-year-old goaltender from Sherwood Park, Alta., was the understudy to Jiri Patera for his first two seasons, and then took over the top job for the last two years.

“It’s just been a crazy ride,” Kruger said. “I’ve matured so much, just learning to relax and let things happen and just have fun while doing it. On the ice I grew, my game is next level compared to what it was five years ago. Even as a person, I’m always a team-first guy and doing anything it takes to win.”

At training camp prior to the 2018-19 season, Kruger was part of a three-way battle to earn time in the crease. The situation was settled on Sept. 19, 2018 when the Wheat Kings shipped veteran Dylan Myskiw to the Edmonton Oil Kings for a draft pick.

The six-foot-two, 186-pound Kruger said he enjoyed serving as understudy to Patera, who had already been drafted by the Vegas Golden Knights. The pair became close, rooming together on the road.

“It was a great experience and a good opportunity for me to learn from him,” Kruger said. “He came in and was a drafted Euro goalie so he obviously knew what it takes to get to the pro level. It just helped me relax a bit. He’s a really good guy. I just kind of shadowed him over the years and it made me very confident going into my 19-year-old season.”

At the same time, the youngster was undergoing a tremendous transition off the ice. It was his first time away from father Ryan, mother Kelly and sister Grace, but fortunately for him, it certainly didn’t take long for Brandon to begin to feel like home.

“It happened in my first season,” Kruger said. “Especially if you’re 12 hours away from home, you kind of have to make it home or you’re going to struggle a little bit. I think it was a good group of guys and they made it feel like home.”

Kruger stayed with Ryan and Pam Boguski and their children, Marx, Beckett and Nixon for all four years. He had a roommate this year for the first time, forward Brett Hyland.

“They’ve been the best,” Kruger said of the Boguski family. “I can’t thank them enough for what they’ve done for me. Seeing the boys grow up has been pretty special. I hope to come back in a couple of years and see them grown up again. They are the best, they went out of their way for me and commit so much for us to live there.”

“They’ve done a great job,” Kruger said. “I’ve had Donny and Billy (Derlago) the past couple of years and Dan and Planter too. We’ve been together for five years so he’s been beside me the whole way, helping me along the way.”

He also holds Brandon’s fans in high regard.

“I just can’t thank them enough,” Kruger said. “Being a goalie in Brandon, you automatically get attached to, so it’s pretty special being a goalie here. It’s just awesome, their support every year. It’s a special place to play.”

Kruger also had a chance to attend his first NHL camp last fall, taking to the ice with the Edmonton Oilers and playing with Connor McDavid’s practice team. They skated together four times.

While Kruger is quick to credit the people around him for his success, he also made a profound impact on his teammates. Nychuk said the two have become very close.

“He’s one of my best friends now,” Nychuk said. “Obviously he’s a hell of a goalie. I can’t say much other than how good of a guy he is. I’ll be friends with him the rest of my life. Even Sal (Neithan Salame), I’ll probably make a few trips out to Alberta to hang out with them.

“We’ve become really close over these last four years and I can’t thank him enough.”

“Kruger puts a smile on every day and is a great teammate and a great person,” Kallionkieli said.

In 24 appearances in the 2019-20 campaign, Kruger posted a 2.81 gaa and a .912 save percentage, close to Patera’s 2.55 gaa and .921 save percentage. His first taste of the starting job came that season after Patera’s right ankle became infected following an outing against the Saskatoon Blades on Oct. 6.

The Czech netminder had surgery shortly after the team headed out on its West Coast trip — and with former Brandon goalie Connor Ungar called up to provide a backup — Kruger took over the top job, making the next dozen starts for his club.

Kruger took over as the team’s starter in the Regina hub last spring, appearing in 16 of the team’s 24 games and posting a pair of career bests with a 2.30 gaa and .915 save percentage as they won the East Division title. While Kruger and his teammates lost the end of the 2019-20 season and most of a promising 2020-21 season, he chooses not to worry about it too much.

“You kind of have to look past it,” Kruger said. “Me and Chad sometimes talk about it because we had a pretty special team last year and it would have been a huge year for us and we probably would have hoisted a championship but that’s what it is. That’s how the world works. You can’t live in regret, you have to move on.

“It helped us grow as individuals too. I think we grew mentally stronger and as players too. Whatever comes their way in the next couple of years, they’ll be ready for because we dealt with it in probably the most difficult time of our lives.”

This season, he appeared in 51 games, with a 3.15 gaa and .901 save percentage. He was also knocked out of the lineup twice in incidents that resulted in goaltender interference calls to opposing forwards.

His major junior career ended in an unusual way, with Red Deer finally beating him on their 21st shot of the three overtime periods in Game 6. He made 50 saves that night.

“If you want a last game, that’s the way you want it to happen but unfortunately we lost,” Kruger said. “It’s just crazy what happened but I couldn’t ask for a better group of guys.”

It was the first time in his hockey career he got past the first overtime.

It’s uncertain what uniform he’ll be wearing next. Kruger is weighing his options, which include pro hockey or using the WHL scholarship plan to attend university.

“I’m not really sure right now,” Kruger said. “We’re going to see if there are any pro offers in the next little bit and if not, I’ll go the (U Sports) route most likely at my hometown school, which is the University of Alberta. We’ll see what happens in the next month but that’s my backup plan.”

The goaltender said when he looks back on his major junior career in the future, there will be a few things that stand out for him. And for that reason, Brandon will always hold a place in his heart.

“I think it will be the city in general,” Kruger said. “Being a Wheat King is probably the most special thing here. You’re a mini celebrity and it’s pretty cool. If you’re playing in Edmonton, it’s not going to be like that because there’s a bunch of teams.

“It’s pretty special here how the fans look up to you and the rink here is the best rink ever. I love it.”