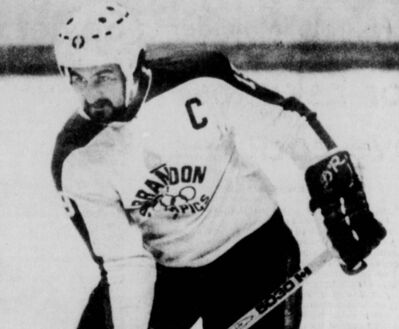 “Have a good time,” Jaska said. “Get out there and get going.”

He grew up in the city, with his family moving from Seventh Street to 28th Street, a few blocks from the West End Community Centre. Jaska first started skating at age six or seven.

“We would have so many kids out on the ice it wouldn’t even be funny,” Jaska said. “You would freeze to death and jump up and down when your toes were real cold.”

He said his parents John and Stella were great supporters, although his dad’s busy schedule sometimes made rides difficult.

“They used to get me my equipment,” Jaska said. “My dad had Jaska Construction and you never knew when he was going to pick you up.”

Sports quickly became a passion for the youngster. He grew up a fan of the Wheat Kings, and like many youngsters back in the late 1950s, found a way to get into games with his buddies for free.

“If you went in the back in the grey area, you used to sneak in the top and you never had to pay,” Jaska said.

When the Wheat Kings franchise went dormant for four seasons in the mid-1950s, the semi-pro Regals took their place for two seasons.

Jaska enjoyed them as well.

After playing for the community centre and school teams as a kid, he was picked up by the Wheat Kings Junior B team. They played with the SouthWest Hockey League’s Reston Rockets, where Jaska gave everybody a good look at his offensive capabilities.

During the 1961-62 season, he scored six goals in a game during a total-goals playoff series against Goodlands-Waskada.

“Fort Frances was short of players and what happened was the Wheat Kings went down and it was 18-2 and 17-2,” Jaska said. “That’s what we beat them by. We went home and (Jake Milford) traded me and Benny to Fort Frances to play.”

The deal came days after the lopsided season-opening defeats. Fort Frances acquired Jaska with the promise that he could spend his 20-year-old season with whichever team he chose.

While it was the first time away from home for the 19-year-old defenceman, he looks at it philosophically now.

“You have to grow up once in a while,” Jaska said.

He received a lot of ice time and posted 19 points in 29 games with the Ontario club. Luckily for the Wheat Kings, he decided to come home to Brandon for his 20-year-old year. He enjoyed the chance to play in front of family.

“I had all my aunts and uncles there cheering for me,” Jaska said.

Jaska, whose usual defensive partner was Winnipegger Bill Bond, played well enough to earn a spot in the SJHL’s all-star game on Feb. 6, 1965 in Estevan. He said his approach to the game was simple.

“I liked to get the puck and shoot it as hard as I could,” Jaska said. “I scored a lot of goals.”

Unfortunately, as the Wheat Kings neared the playoffs, Jaska broke his wrist on Feb. 17, 1965, an injury that was expected to cost him five weeks.

The Wheat Kings finished the regular season in third with a record of 30-21-5, and beat the Saskatoon Blades 4-1 in the league quarterfinals with Jaska in the lineup wearing a cast. The Wheat Kings were then swept by the Weyburn Red Wings in the SJHL semifinal.

After graduating, Jaska attended a New York Rangers camp but headed home when it didn’t work out.

In the old six-team National Hockey League, Jaska told the Brandon Sun’s Jack Gibson in 1978 he simply didn’t have what it took and chose to move on.

“I wasn’t good enough,” he said at the time. “I had a choice of either kicking around in the minor leagues or coming home to a half-decent business.”

When he first returned to Brandon, he received a call from his former teammate Ron (Spike) Huston about the senior Cranbrook Royals. The team wasn’t very good and Jaska wasn’t getting paid in his off-ice job, so he decided to come home to Brandon after eight games.

Jaska joined the SouthWest Hockey League’s Neepawa Natives in the 1966-67 season, and made a quick splash by winning the league scoring title.

He spent nine seasons with Neepawa and helped turn the Natives into a senior powerhouse, but with the Natives getting younger and weary of the highway drive, Jaska joined the Brandon Olympics for the 1975-76 season.

“There were quite a few guys who were good hockey players,” Jaska said. “Anybody who played in the NHL or a real good team would come out and usually joined us. We had a great bunch of guys and we got together and had a lot of fun.”

He later joined the Molson Pioneers, another group of guys who enjoyed each other’s company.

“We never lost a party,” Jaska said. “We were the last ones to go home always.”

Jaska wasn’t just an elite hockey player, however. He seemed to be good at everything he tried.

In 1969, the Brandon Sun named him a finalist for the Krug Crawford award as Brandon’s top sportsperson. Along with winning the scoring title and MVP award in the SWHL in the 1967-68 season, he led the Seals to a second-place finish in the Major Fastball League and earned another all-star nod.

On top of that, he began stock racing, winning the most points for six cylinders and winning three trophies at the Chater Raceway. He was even a very good bowler, although he gave that up to concentrate on hockey.

On the ball diamond, he retired in 1977 after a star-studded career in the Brandon Centennial Fastball League.

Jaska, who is married to wife Chris and has sons Rob and Ryan and five grandchildren, worked at his father’s construction company by the time he was 16.

It’s decades since he last wore the wheat sheaf on his chest, but Jaska is happy he had a chance to come back and play for the team he watched growing up.

“I always wanted to make the team.”