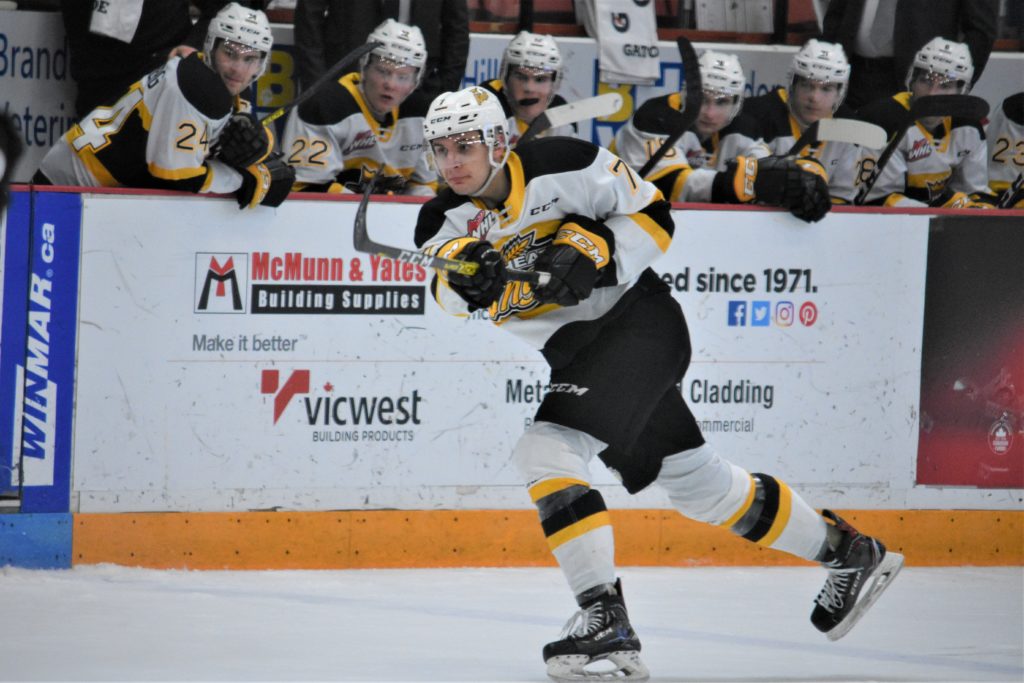 A product of Abbotsford, B.C., Iorio is entering his third season in the Western Hockey League, but because his Nov. 14 birthday falls after the NHL’s Sept. 15 deadline, he’s finally in his draft year. Another Brandon defenceman, Braden Schneider, also had to wait an extra year, as did former Wheat Kings forward Nolan Patrick.

It was hard to miss the growth in Iorio’s game in his second season. A rookie who was trying not to make mistakes blossomed into a blue-liner who tried to push the play offensively and became harder to skate against.

“I think confidence for sure,” Iorio said. “Confidence was definitely the most important part, and just being an older guy and recognizing that I could contribute to the team more than I did as a rookie. As a rookie, you go through ups and downs, and just knowing that I had the team there and everyone in the Brandon Wheat Kings organization had my back, that was really, really, really important for me in making a stride in my 17-year-old year.”

After putting up five points in 50 games in his rookie year, Iorio exploded for four goals and 17 assists in 59 games last season.

It was growth that was mirrored as a team. The team was especially good in the second half as it internalized the method of play favoured by Brandon coach Dave Lowry.

“I think it’s the little details, honestly,” Iorio said. “Dave Lowry is very, very, very good when it comes to hammering down the little things and I think we had everything there at the start of the season but we didn’t quite have that extra oomph and we didn’t really have anyone to push us. It’s hard to explain, but Dave was there and kept pushing us and pushing us, and because of that we became a closer-knit group and we succeeded more.”

That made the season being cancelled that much tougher for the players, If there is a bright spot for the Wheat Kings, Iorio expects the returning veterans will be a hungry group when the season begins on Jan. 8.

“Considering that we were on such a high note and how well we were playing, it was really a punch in the gut,” Iorio said. “We all saw it coming once the NBA game was cancelled. Once the news broke out the next day about the NHL and the NBA shutting down, we all knew what was coming and we all had to be prepared for the worst.

“We were caught off guard by it, but I think it’s going to be one of the best things the ever happened to us because we all know how good of a team we’ll be and I expect that each and every player is going to be very, very motivated to win a championship this year.”

Iorio said he still had school to keep him busy after he returned to British Columbia, and he admitted there was some time spent with video games as well. He also spent plenty of time with parents Mario and Jennifer and younger sister Olivia.

“There wasn’t much information about COVID so all we knew was to stay home and stay safe, keep your gatherings to a limit and wait it out,” Iorio said. “That’s what I did.”

He’s fortunate to have a gym set up at home, so he was able to get his workouts in before the gyms finally opened. Iorio said he had a plan for the extended off-season.

“I just had to get stronger,” Iorio said. “As clichéd as it sounds, I think I needed to get stronger and faster and I’ve done a very, very good job of that. I have to give credit to my coaches and my trainers and even my training group, because they’ve continued to push me through this whole summer.”

He also worked on developing a quicker release on his shot.

The work extended beyond the gym and rink, as Iorio also spent time working in the family business.

“We’re currently building a home up in the Penticton area so I’ve been up there helping him build the house,” Iorio said. “I’m just trying to stay as active as possible and keeping in game shape knowing we’re going back pretty soon.

“It’s pretty hard but it was really some quality family time, especially with the cousins. I was very grateful for it.”

Brandon was fortunate the gregarious youngster fell to them with the 27th pick of the 2017 WHL bantam draft.

He attended Shattuck-St. Mary’s in Faribault. Minn., and since the vast majority of Shattuck-St. Mary’s alumni go on to play in the American college ranks, Iorio dropped out of the first round when scouts questioned whether he would report to a WHL team.

The Wheat Kings used the selection they acquired at the 2016 trade deadline from the Saskatoon Blades, along with Mitch Wheaton and Schael Higson, for Braylon Shmyr and Colton Waltz.

He expects the team will have plenty of motivation this season.

“It comes down to confidence and it comes down to the little things,” Iorio said. “I think we’ll take care of that, especially knowing we’ve been off so long. Everyone is really eager to come back and knowing how tight knit of a group we have and how special of a group we have, I think it’s going to be a very, very important opportunity to come out strong and come out firing on all cylinders. I believe it will be very fun.”

While it’s been eight months since he’s seen his teammates, he has kept in close contact with them through their group chat. He’s especially tight with Ty Thorpe and Jonny Lambos, who he lives with during the season.

“We’ve really become a family within a family, considering that we all live together,” Iorio said. “We’re pretty much brothers. We text all the time, hang out all the time and especially with fantasy football, we’ve been chatting with each other a lot. It’s awesome.”

Iorio said he’s confident in his abilities, especially after the long off-season and the work he put in. The next step, returning to Brandon, will be a big one for him and he can’t wait.

“I think about it quite a bit,” Iorio said. “Just to see all the smiles on the guys’ faces and be back to the Keystone and just be back in Brandon. I’ve spent a lot of time here and I’ve really enjoyed hanging out with my family and everybody but I really want to get back into the season, back into Brandon and back to the crazy cold winters in Manitoba.”