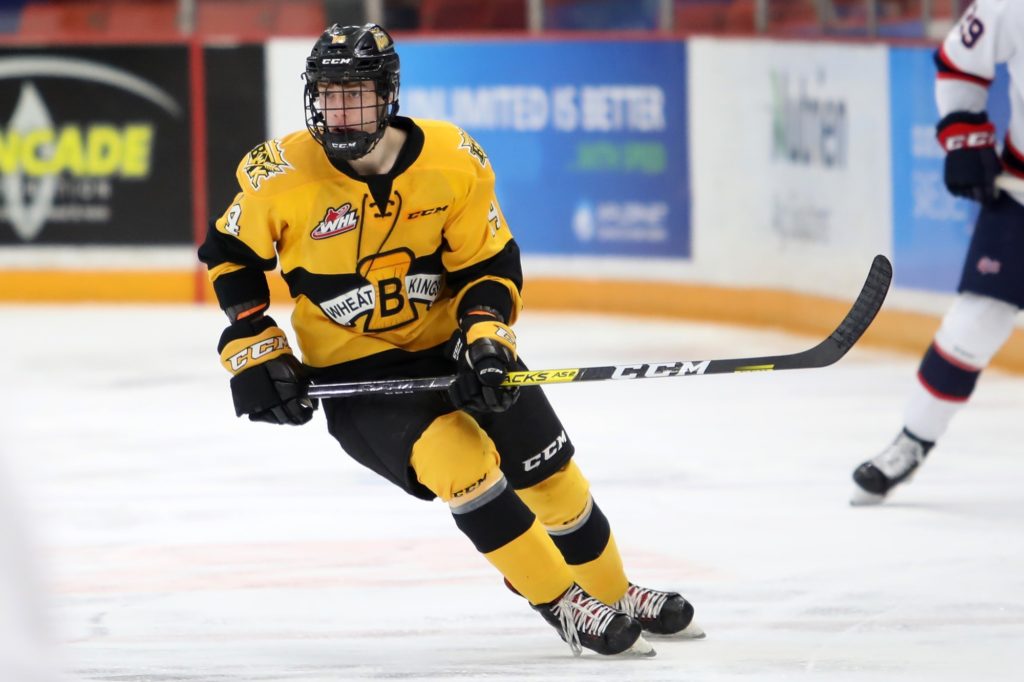 Brett Hyland finally enjoyed an audition with the Brandon Wheat Kings this season.

With a taste of the Western Hockey League now under his belt, the 17-year-old Edmonton product is looking for more. Hyland found out he would be making the post-Christmas trip to Brandon a month prior, shortly after a showcase in Red Deer that saw him score five times in a single game.

“I felt good about it,” Hyland said. “I thought if I came up again I could have some more good games and do it again. I thought that experience was good for me. I was nervous, I wasn’t too sure what it would be like going in or how I would do so I was happy with how it resulted and the feedback I got.”

Hyland appeared in three games with the Wheat Kings, making his debut on Dec. 30 in a 4-1 win over the visiting Regina Pats. He said his time in the Wheat City, dating back to an extended stay in September, showed him what lay ahead.

“In Brandon, at the main camp especially, I see where I have to be at, where the older guys are at and where I have to get to,” Hyland said. “When I come back I’m really working towards that. You go and see what’s it like and then you come back and work at it. That’s how it helps me and prepares me and shows me what I have to do.”

He certainly did put it to good use over the winter.

Hyland served as captain of the CAC Canadians (11-15-6) in the Alberta Midget Hockey League, and certainly found his scoring touch, sniping 26 times in 31 games with 24 assists and 89 penalty minutes.

He also had a pair of assists in five games spread over the Alberta Junior Hockey League season with the Sherwood Park Crusaders.

He joined a team with a lot of old friends, and while they had a tough first half, they made a push into the playoffs in the second half. They won their first round series against the Lloydminster Bobcats before being swept in the Dodge Division semifinal by his fellow Brandon prospect Jaxon Dube and the first-place St. Albert Raiders, losing Game 3 in the best-of-five series on March 2.

He led the team in goals and finished second in points.

“Brett did everything we could have asked of a young man coming back to play midget AAA,” Gasper said. “I know he was a little disappointed when he didn’t make the (Wheat Kings) this year but Brett finished second overall in the league scoring with 50 points and 89 penalty minutes, and in the playoffs, he was one of the key guys in an upset over the Lloydminster Bobcats. He’s still leading the league in playoff scoring with 14 points in eight games. He’s a real good skater with a very complete game.

“He does everything you could ask of a player. He plays 200 feet and is just a real good kid with a great development for us.”

The five-foot-11, 170-pound forward was selected with the 24th overall pick in the 2018 Western Hockey League draft, which Brandon acquired as part of blockbuster deal that sent defenceman Kale Clague to the Moose Jaw Warriors.

While the COVID-19 league shutdown came after his season ended, Hyland said it’s an odd time.

“It’s honestly really weird seeing everything closed down,” Hyland said. “No gyms, no hockey, no nothing. Everything just feels different for me right now. It’s hard to deal with. I’m going to have a find a way to stay in the community somehow. I’ll have to find a gym. I don’t know what I’m going to do. I’m honestly kind of confused right at the moment because it all just happened so suddenly.”

He doesn’t plan to let it change his plans, however. Next season he wants to skate for the Wheat Kings.

“I’m going to have a big off-season here and be working out every day getting ready to come out there,” Hyland said. “I have to gain some weight and then when I come, I’m definitely going to be prepared and ready to make that team and push the older guys out.”