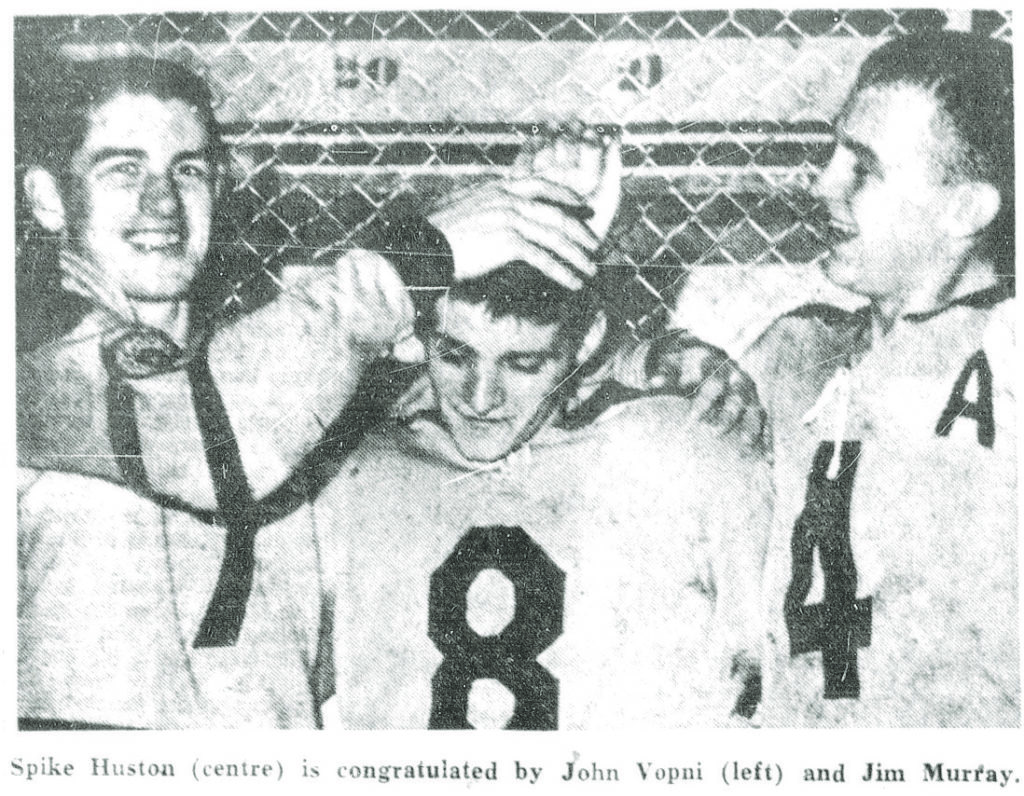 You would be hard pressed to find a more unlikely path to the National Hockey League than that of Ron (Spike) Huston.

The former Brandon Wheat Kings forward, who spent three seasons with the club from 1962 to 1965, was playing senior hockey with the Calgary Stampeders of the Western International Hockey League during the 1970-71 campaign. Three seasons later, he made his NHL debut on Jan. 16, 1974 with the California Golden Seals at age 28.

Brandon Wheat Kings players John Vopni, left, and Jim Murray, right, congratulate Ron Huston on his goal and five assists in Brandon’s 11-2 rout of the St. Boniface Canadiens in front of 1,115 fans at the Wheat City Arena on Nov. 21, 1963.

That came after he was cut by the old professional Western Hockey League’s Seattle Totems at the start of the 1967-68 season following the arrival of a bunch of players sent by the Montreal Canadiens.

“They gassed me and that’s when I figured my NHL career was over,” Huston said with a chuckle.

He was born in Manitou and lived on a nearby farm until the family — father Jim, mother Agnes, brother Bill and sisters Eunice and Ellen — moved to Brandon when he was a few years old.

Huston began skating soon after at a slough down by the Assiniboine River because it was the first thing that froze over. The East End also had a pair of outdoor rinks for figure skating and hockey, and after firefighters laid down the first flood with their fire hoses, the youngsters would migrate there.

Bill, who was about three years old and died in 2019, also played hockey. During a winter carnival at the rink one year, Spike won his age group in a skating race and also captured the two above that. Eventually he faced kids three years older than he was and met Bill in the final.

“I was right behind him all the way to the last turn and I went by him and he reached out his hand and got disqualified,” Huston said with a chuckle. “Oh, my dad ripped him apart. He was a pretty good hockey player but he was a little shy so he quit after that.”

Hockey’s loss proved to be fastball’s gain as Bill was later inducted into the Manitoba Softball Hall of Fame as an individual player in 2006 and as a member of the 7up team in 2009.

Spike said his parents were big boosters of the brothers playing hockey.

“Every year I got a new pair of skates and I got them sharpened every week even then,” Huston said. “There was only bantam and midget at that time, there was no peewee or anything like that. We played school hockey and you had to be in Grade 5 or 6 to play. Once a week down at the old (Wheat City Arena), we played 24 minutes straight time, two periods. Anyway, I started playing when I was in Grade 3, not in Grade 5.”

Other than his last two years of school hockey when he moved back to the blue-line to get more playing time, Huston was always a forward.

Growing up, Huston was a fan of the Manitoba Junior Hockey League’s Wheat Kings. When they ceased operations for four seasons from 1954 to 1958, he attended games featuring the minor professional Western Hockey League’s Brandon Regals, who played the 1955-56 season in the Wheat City Arena, and then half of the 1956-57 campaign after a move to Regina proved unsuccessful.

Part of the adventure of going to games was exploring the old Wheat City Arena, which sat in the current location of the Brandon Police Service building and parking lot. It was built in 1913 and demolished in 1969.

“You would walk around the outside and the offices were in the front and our dressing room was in the opposite corner in the back,” Huston said, adding it inspired youngsters to make the jump to the big team. “When you were playing bantam or something, you always wanted to play for the Wheat Kings.”

After leading the midget league in 1960-61 with 51 points despite missing time due to a toboggan accident, the Wheat Kings signed Huston for the 1961-62 season.

He suited up that year with the Reston Rockets in the SouthWest Intermediate senior league, which was led by player-coach Glen Lawson.

Huston earned a spot as a 17-year-old on the 1962-63 Wheat Kings squad under general manager Jake Milford, joining the team for a pair of MJHL championships as they went 32-7 that season and 27-1-2 a year later.

“We were the far superior team in the league,” Huston said. “Jake got whoever he could get. The Winnipeg teams all got their kids out of Winnipeg so we had a big advantage that way.”

The 1962-63 squad was led by the high-scoring duo of Bob Stoyko and Dennis Hextall, with Bob Ash and Jim Murray anchoring the blue-line.

It was a big step up for the youngster, who was five-foot-nine.

“Oh for sure,” Huston said. “Everybody was bigger and stronger. You noticed a big difference.”

While it was a rugged game in the early 1960s, it was nothing like the age of the battling Broad Street Bullies that the Philadelphia Flyers ushered in more than a decade later.

“We had some guys who would fight but there wasn’t a whole whack of fighting in those days,” Huston said. “There weren’t guys in your lineup just to fight.”

He played 20 games with the Wheat Kings that season as head coach Ron Maxwell eased him into the lineup, but quickly felt comfortable in the dressing room with area players Ash, Murray and his minor hockey teammate Bob Jaska.

“It wasn’t overwhelming,” Huston said. “You’re happy as heck to be in there and have a stall.”

Huston said it was nice to skate in the Wheat City Arena, which always good ice. It was also great to simply play at home.

“We had lots of fan and everybody knew you,” Huston said. “I called Brandon my home.”

Huston was one of the few Brandonites who made the team at that time. He said Milford figured local players simply found their way into more trouble.

“He didn’t like me,” Huston said of Milford. “He thought we were partying too much.”

Huston added with a chuckle that Milford was probably right.

Huston’s game quickly grew. As an 18-year-old in the 1963-64 campaign, he exploded for 30 goals and 20 assists on the top line with John Vopni and Leon Garinger.

The trio finished in the top three spots in team scoring.

“I was always a good skater,” Huston said. “Some people didn’t think I was too fast but I could keep up with most guys. I could shoot the puck pretty well and I could stick handle. I would rather pass the puck than score. If we had a 2-on-0 with no goalie, I would pass it over to the guy beside me. It’s how I played. Lots of coaches said to me I didn’t shoot enough but I could score my share.”

He became close to teammates such as Larry McKillop and Rick Hextall, but they were discouraged from going to the billet homes of out-of-town players. He quit school in Grade 11 and had to get a job, working as a bricklayer’s helper.