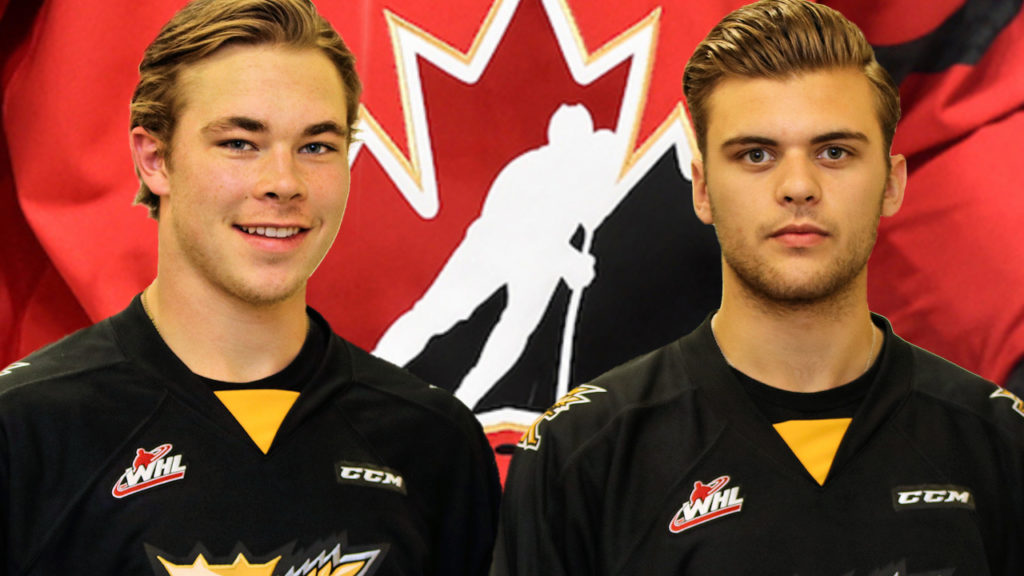 CALGARY, AB. — Canada’s run for gold begins with a wide open competition for spots next week, as Hockey Canada named its selection camp roster on Wednesday in preparation for the 2018 World Junior Hockey Championship.

Brandon captain Tanner Kaspick will be joined by defenceman Kale Clague, who is one of seven players returning from last year’s team.

Entering Wednesday night’s game against the visiting Regina Pats, Kaspick has seven goals and 25 points in 24 games this season. In 180 career WHL games, the St. Louis Blues prospect has 120 points, including 41 goals.

A second team Eastern Conference All Star, Clague leads all WHL defencemen in scoring this season with ten goals and 40 points in 25 games.

Since joining the Wheat Kings, the Lloydminster product has 25 goals and 136 points in 166 career WHL games.

The other returning players include Everett’s Carter Hart and forwards Michael McLeod of Mississauga, Taylor Raddysh of Erie, Kelowna’s Dillon Dube, Jake Bean of the Calgary Hitmen and Dante Fabbro of Boston University.

That leaves 16 spots up for grabs as Hockey Canada will trim the roster down to 23 players.

“When you start taking out some prominent guys on defence and some potential No. 1, No. 2 and No. 3 centres amongst the forwards, it opens things up for the camp,” TSN Hockey Insider Bob McKenzie explained this week. “I think there are going to be some very good players that attend this camp, but it might lack a little bit of star power and I think this is a camp that you would look at and say that there’s a high degree of sensitivity…that is, a really good performance by somebody could launch them right into the picture, a really poor performance in the camp could knock them out.”

Canada lost in heartbreaking fashion in last year’s gold-medal final, edged in a shootout by the United States at Montreal’s Bell Centre.

Though most of these players will likely stay in the NHL, teams have until Dec. 19 to decide whether or not to loan them to the tournament.

Thirteen of the players selected Wednesday are from the WHL and Kaspick is one of three Manitobans to be chosen, joining Portland’s Glass and Brett Howden of the Moose Jaw Warriors.

Selection camp begins next Tuesday in St. Catharines, Ont. and runs through Dec. 15. The camp includes games against a team of U Sports All-Stars on Dec. 13 and 14 and an exhibition game against Denmark on Dec. 15 before the final roster is announced.

Canada opens the World Junior Tournament in Buffalo on Boxing Day against Finland.