Groening happy to stay in Manitoba 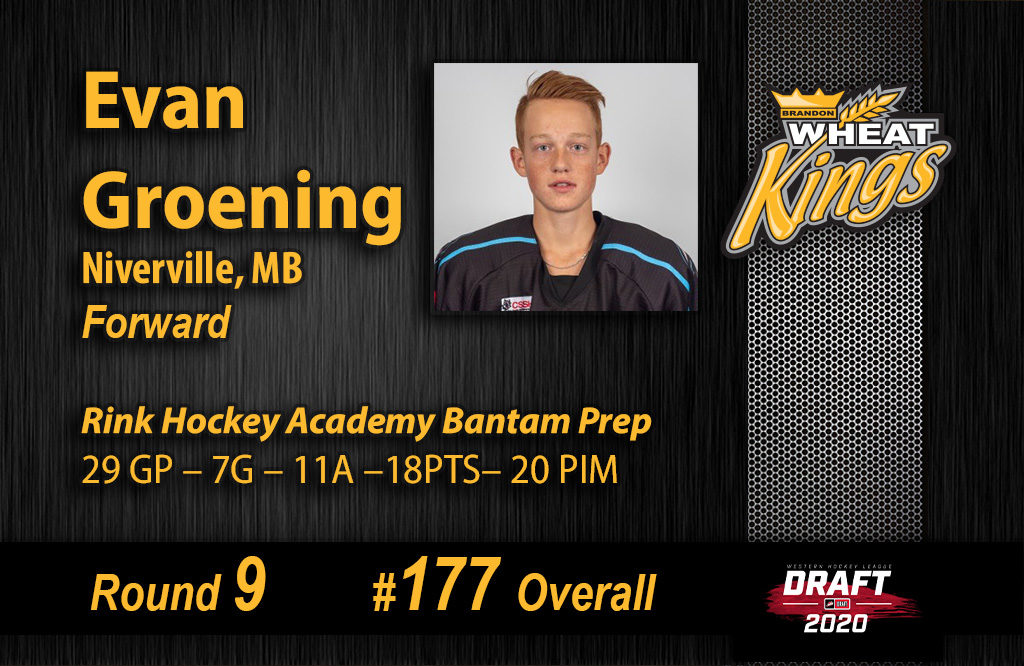 Never underestimate how meaningful it is for a Manitoba player to be drafted into the Western Hockey League by the Brandon Wheat Kings.

Brandon picked Niverville forward Evan Groening in the ninth round of the Western Hockey League bantam draft with the 177th overall selection on April 22.

“It was surreal,” Groening said. “I wasn’t expecting to go to Brandon at all. When I saw my name pop up, it was awesome. Brandon is so close to me and as a kid you always think about the Brandon Wheat Kings as a Manitoban team. It’s kind of cool to be drafted by them.”

“For me, it’s almost like a new start,” Groening said of getting drafted. “It’s almost like the work starts now. One hundred per cent, it’s motivated me even more to take the game a further step.”

That will be music to the ears of Wheat Kings assistant general manager and head scout Doug Gasper, who said on draft day that Groening does a lot of things right.

“He skates really well and separates himself, goes to the net hard, plays in all the tough areas and he’s a guy who looks to score on every shift,” Gasper said. “He’s very responsible in his own end.”

The left-handed shot, who turned 15 in April, agreed that his biggest asset is his ability to fly around the ice.

“My skating is my biggest thing, and my quickness and edges,” Groening said. “I’m a dynamic skater.”

He said the biggest item on his to-do list is to build his confidence in his goal-scoring ability, noting a forward’s job is to create offence.

Prior to the draft, Groening took the unusual step of researching the league as much as he could so that he could walk into any situation with his eyes wide open.

“I’ve done a lot of research and talked to a lot of people about the WHL so that I could fully informed on what the deal is,” Groening said. “I think I’m pretty up to date on everything that’s going on the Dub. I’m pretty educated.”

Groening, whose father and grandfather also played the game, took up hockey at age five, and always played up front. He plays golf quite a bit in the summer, and also likes mountain biking and jet skiing.

Because he’s a Manitoba guy, he has a sense of the hockey scene in the Wheat City.

Groening has played in Brandon before in minor hockey, including in Westoba Place. With prospects camp cancelled due to the pandemic, he’ll have to wait until rookie camp in August to make his first impression in the Wheat City with the club.

“I’m really excited for that,” Groening said. “Obviously I want to impress people and show them what I can do on the ice but other than that I want to meet everyone. I’ve already had a few guys text me. Quite a few players and the GM (Darren Ritchie) all told me the same thing. It seems like a big family there and I’m excited to get started. They all seem super nice.”

He trains in his home gym, and has been running a lot to keep his cardio strong. Groening has been able to shoot a lot of pucks and do plenty of skill work, in part because Rink has been sending their players drills online.

He hasn’t decided yet if he’ll be returning to Rink or playing with the Eastman Selects in the Manitoba U18 AAA Hockey League next season.

Regardless, Groening knows that if he hopes to play at a higher level that he’ll have to put some weight on his 133-pound frame.

“Obviously I want to get bigger,” Groening said. “In the WHL and MJHL and even college, you need to have a good size to you and be physical. It’s not easy if you have no weight on you so that’s something that I want improve on, is to gain some weight and get bigger.”

ICINGS: The Wheat Kings signed third-round pick Teydon Trembecky on Tuesday. They have also inked first rounder Quinn Mantei and second rounder Trae Johnson … Kamloops Blazers goalie Dylan Garand was named academic player of the year by the WHL on Wednesday. Roblin’s Jakob Brook of the Regina Pats was the runnerup. A day earlier, Calgary Hitmen forward Riley Fiddler-Schultz was named humanitarian of the year … The Portland Winterhawks are up for sale after the team’s parent company filed for Chapter 15 bankruptcy last week. The club is being run by a court-appointed receiver.