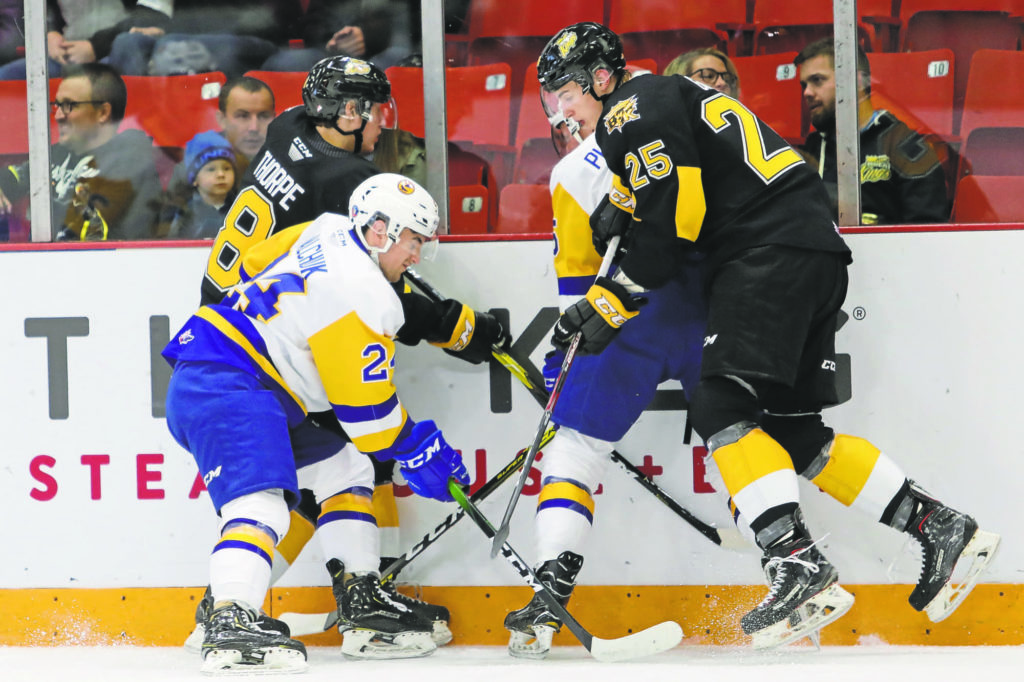 This season, the six-foot-three, 185-pound forward wants those flashes to become normal every game.

“I plan on contributing a lot more this year offensively and get into my game a little more,” Ginnell said.

The Wheat Kings acquired Ginnell from the Kamloops Blazers on Sept. 17, 2019 for a sixth-round Western Hockey League bantam pick in 2021. Ginnell, whose 20-year-old brother Brad is a forward with the Spokane Chiefs, appeared in 25 games with Brandon, scoring three goals and adding an assist and eight penalty minutes.

“I view it as a good learning curve,” Ginnell said. “It was awesome to get experience but it didn’t go as well as I wanted it too. It was very nice to have the older guys there and they cushioned it pretty well as a rookie. It didn’t even really feel like you were one. It was a really good season to experience.”

As a frequent healthy scratch, the big winger wasn’t able to build a lot of momentum from playing night after night. Instead, he had to take the positives from his best nights when he truly looked like an impressive young prospect.

“It was really big confidence-wise,” Ginnell said. “If you’re in and out of the lineup and have a good game, it definitely gives you a good mindset going into the next one.”

Ginnell, the grandson of WHL coaching legend Pat Ginnell, spent the 2018-19 season at Edge School playing prep hockey, where he posted 10 goals and nine assists in 24 games. In minor midget in his hometown of Calgary, Ginnell put up 37 points in 30 games.

He joined a Wheat Kings squad that improved steadily all season, winning 20 of their final 29 games. Ginnell was impressed by what he saw.

“I think we really came together as a group,” Ginnell said. “We just played to the best of our ability and Jiri (Patera) was an outstanding goalie. I think the camaraderie on our team was unmatched and that really led us a long way.”

It also made the way the season ended that much more difficult. The Wheat Kings seemed destined for a playoff matchup with the Winnipeg Ice, and were eager to make some noise.

But he and the team’s three overagers, Patera, captain Connor Gutenberg and shutdown defenceman Dom Schmiemann, didn’t have that opportunity when the season was cancelled.

“We were just on such a roll and guys were coming together as a team so well,” Ginnell said. “It’s unfair for the 20s. You’re losing guys and you don’t know when you’ll see them next. It is what it is.”

After the season ended, Ginnell returned home to Calgary to quarantine with his family. It certainly wasn’t an ideal situation.

“I did as much as I could with off-ice training but there’s so much you can do at home,” Ginnell said. “It was definitely a difficult and weird time but it needed to be done.”

He had a small gym setup at home, but the family soon headed to its cabin near Flin Flon — the former home of his grandparents Pat and Wanda — where he had a bit more freedom.

He joined his Flin Flon friend Justin Lies of the Vancouver Giants at his home gym, and they were also able to skate at the Whitney Forum.

“It was awesome,” Ginnell said. “I really appreciate how hard he works. It was awesome to have someone to push you.”

Ginnell keyed in on getting stronger and faster, like most players, but set a specific focus for his work.

“I wanted to get stronger on the puck so I did a lot of legs and just working on my core down,” Ginnell said.

While the league’s starting date for its regular season has moved from October to December — giving the players an almost nine-month off-season — Ginnell said he was able to use the extra time wisely.

He said it was easy to stay focused.

“I thought I was pretty motivated this summer,” Ginnell said. “I have a lot to prove I feel so it was going to be a big summer for me to work as much as I can to try and get a jump on the season, no matter when it starts. It’s difficult not knowing when you’re going to play but that almost pushed me a little bit more to be prepared for that day.”

As the league battles COVID-19, it will in all likelihood be a disparate season for players. Everything from the late start to how many fans can watch games to even little things like autograph alley and public appearances may change. Ginnell is prepared for something very different this year.

Regardless of what happens off the ice, Ginnell is pumped for what could happen on the ice. Brandon returns much of its veteran squad and expectations will be high.

“I think we can do a lot this year,” Ginnell said. “At the end of last year unfortunately it got stopped too early but I think we can pick up right where we left off, just clicking as a team and really coming together again. I don’t see a problem in us being able to do that.”

“I’m very excited,” Ginnell said. “I miss the whole group of guys. We’re such a close-knit tight group that it’s really fun to be around.”