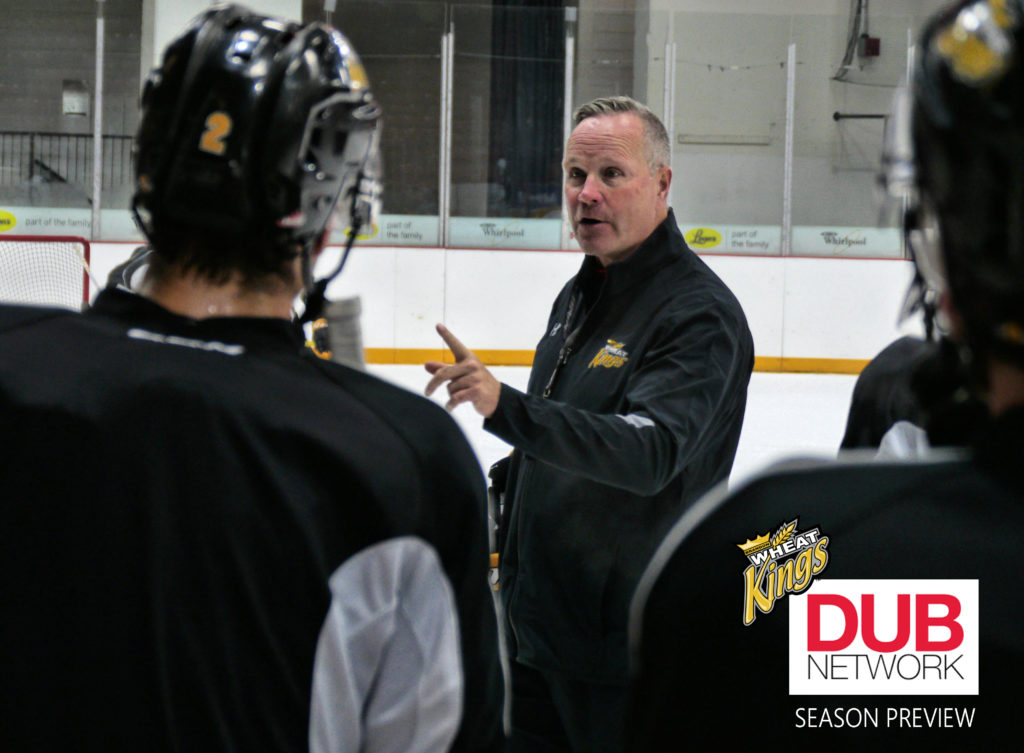 (Story courtesy of Darnell Duff of the Dub Network)

The excitement for WHL hockey fans and teams continues to build as the regular season is just one week away. Starting on September 20, 14 of the teams in the league will take to the ice to begin their 2019-20 regular-season campaigns.

The night’s schedule includes two all-Saskatchewan battles (Saskatoon vs. Prince Albert), (Moose Jaw vs. Regina), one Alberta match up (Medicine Hat vs. Lethbridge), a B.C. vs. U.S. (Spokane vs. Kamloops), an all-B.C. (Vancouver vs. Prince George), an all-U.S. battle (Tri-City vs Everett).

Of course, that’s only six games in a seven-game night. The seventh game is the first regular-season installment of the “Manitoba Battle.” Brandon will begin their season on home ice against its newest rival, the Winnipeg ICE.

Below, we’ll take a deep dive into a season Brandon hopes will be a step above last year.

Well before training camp began, the Wheat Kings changed things up in the front office and on the bench. Darren Ritchie was named the team’s new general manager, after spending the previous three as the team’s director of scouting.

Prior to that, Darren was an assistant coach for the team for 10 years. Coming from the outside was the team’s new head coach. After spending the past two years with the Los Angeles Kings, Dave Lowry was announced as the new head coach. He was first introduced on August 15 at a media availability in the Wheat City.

“Dave is a real good teacher. There’s a lot of structure to his game and practice plans,” said Darren Ritchie, general manager. “We’ve been watching a lot of film, and he’s been breaking down a lot for the players. Things have been going good.”

Also new to the front office was Doug Gasper, who is the team’s assistant general manager.

Now that we’ve taken a look at the crew that will lead this club, let’s head on to the ice.

The team went 31-29-4-4 last year and that resulted in missing the playoffs by just two points. Seven of the losses came in their last 10 games.

With 13 rookies on their roster of 32 that played at least a game last season, their inexperience showed at times. This year, only 10 rookies are on the roster as of this posting, which means a more experienced group will hit the ice, and that could bode well for the team.

“With a young team, it was really important for them to understand that every game counts, and I think they realize that now,” said Ritchie. “We’re expecting to get off to a really good start this year.”

Besides their 2-7-1 end to the season, Brandon went 2-8 in December. They gave up the fifth-most goals in the league (243), and they won just 11 games on the road, which was the third-fewest in the East Division.

Luka Burzan had 78 points (40G), which was second on the team, and he’s back on this year’s team. Ridly Greig, who was a rookie, put up 35 points (14G), which was the most among first-year players.

At the end of the day, the Brandon Wheat Kings are a team that always seem to be title contenders. Although they missed last year’s playoffs, they won’t let the recent past play any sort of a factor in what they do in the present.

Now, it’s time to take a look at this year’s club in what should be an exciting year in the Wheat City.

Without a doubt, the team’s biggest deletion is Stelio Mattheos. He had 96 points last year (44G), and he was a team-best +17.

He actually recently returned back to Brandon after undergoing cancer treatment, and he’s expected to report to the Charlotte Checkers when he’s healthy enough to do so.

“Stelio was a very important guy on our team. You can’t replace a guy like him, but we expect us as a group to score as a committee,” said Ritchie.

Another deletion to the team is Linden McCorrister, who had 29 points. That number may not pop out at you, but he only played 45 games. Big man Baron Thompson will also not return after he was released by the organization this off-season.

I also can’t forget to mention Zach Wytinck and Ben McCartney. Wytinck had 43 points last year, while McCartney was just behind with 41.

“Luka had a great year. We expect him to be a key guy. Guys like Gutenberg, Reinhardt, Greig, and McCartney will be counted on to produce for us night in and night out.”

Where are they now?

“Yeah, we expect those guys to be back before the start of the season,” said Ritchie. “With that said, we can’t really control that. We want them to have a good experience at camp, but when they’re back, we’ll be happy to get them in the lineup.”

One addition to the team that could turn out to be major is Marcus Kallionkieli. Last year with the Sioux City Musketeers of the United States Hockey League, Kallionkieli had 53 points (29G).

He’s yet to join the team, but that’s also expected to happen before the start of the regular season.

Getting off to a good start could be huge for the Wheat Kings moving forward. They play five of their first eight games at Westoba Place, starting on September 20 against Winnipeg.

After a Friday, October 11, home game against Saskatoon, Brandon will get used to the road life, which all WHL teams have to do at some point or another.

Knowing that October will be a tough month, Ritchie and the organization have put together a team that is ready to compete now.

Jiri Patera, Connor Ungar, and Ethan Kruger are all battling for two spots in between the pipes. A decision is soon to be made, and it’s not an easy one for th GM.

“I think that’s a good problem to have,” said Ritchie. “We’re very comfortable with all three. They’ve all competed well. We’ll see what happens.”

The Ty Thorpe watch. After scoring just one goal all of last year in 55 games, Thorpe has scored two already. He led the Wheat Kings with two goals in their preseason opener against Winnipeg.

“It’s always expected that players take a step up from the previous year,” said Ritchie. “Ty came into camp in really good shape. You know you’re going to get 100% effort from him every night. He definitely gained some confidence from that, and now we’re looking for him to take that into the regular season.”

The “Manitoba Battle”. Brandon will face Winnipeg 10 times in the regular season. After splitting in the preseason, the newest rivalry in the Western Hockey League should be a very exciting one to watch.

“All three of the boys did really well in camp. It was all about getting that experience of going to school, working out, and practicing all in one,” said Zimmer. “It’s really important that the kids got a sense so they know what they have to prepare for come next year.”

After missing the playoffs last year, the Wheat Kings have a roster that should be very capable of making noise in the league, as fans in the Wheat City are used to them doing.