Change of scenery good for Hawryluk 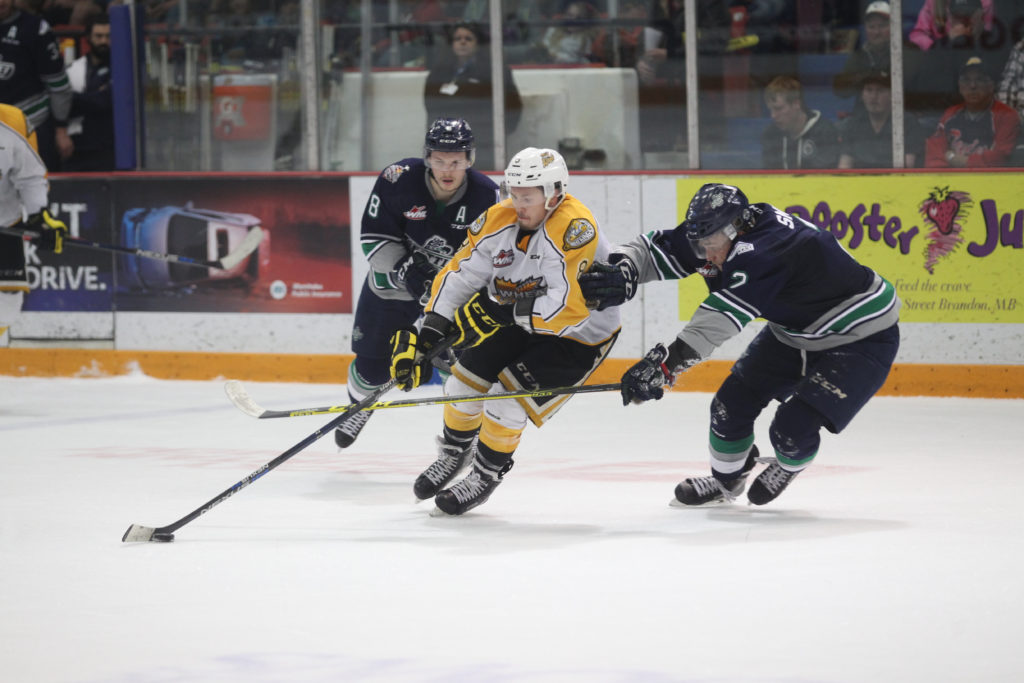 Jayce Hawryluk has a little better understanding of why the National Hockey League paused its season a month ago than most people.

The former Brandon Wheat Kings star was one of seven members of the Ottawa Senators who came down with COVID-19, the pandemic that has reportedly infected nearly two million people around the globe and killed more than 100,000.

“I’ve been feeling better for a while,” Hawryluk said. “It was probably about three weeks ago that it was at its worst. It wasn’t too bad. It was kind of like a cold and I was feeling really tired, but it’s serious. Ever since then I’ve been quarantining.”

The five-foot-11, 196-pound winger is currently holed up at his parents’ home in Roblin.

The cancellation of the end of the NHL’s regular season due to the pandemic was an inglorious conclusion to what proved to be a turn-around campaign for the 24-year-old forward.

After finishing up his Western Hockey League career with a title in 2016, Hawryluk turned pro in the 2016-17 campaign with the American Hockey League’s Springfield Thunderbirds. He spent all but six games — a short stint with the ECHL’s Manchester Monarchs — over the next two seasons in Springfield.

Hawryluk made his NHL debut against the Toronto Maple Leafs on Dec. 15, 2018, and scored his first and second NHL goals eight nights later against the Chicago Blackhawks in just his fifth game with the Panthers.

“Last year was my break-in year,” Hawryluk said. “I spent two months in the minors and I was able to gain a lot of confidence down there and refine my game some more. I felt good coming into that season. I had a big off-season but I was able to find my game in Springfield and that obviously got me the callup.

“When I got called up, I had the mindset not to change my game and keep working hard and play the same way, and the coach there (Bob Boughner) liked that.”

Hawryluk had a career-high, three-point outing in the NHL on March 25, 2019 with two goals and an assist against the Leafs, and finished his 42-game rookie season with seven goals, five assists and 16 penalty minutes.

“It was a breakthrough year for me in terms of gaining confidence and knowing that I can play at that level and be that player that I always wanted,” Hawryluk said.

After the season ended and the Panthers fell just short of the playoffs, however, Boughner was fired and veteran bench boss Joel Quenneville was brought in.

Hawryluk was happy with his training camp last fall and earned a spot with the Panthers. He didn’t play the first two games, but then suited up for eight of the next 10.

“I didn’t feel good until about the fifth game of the season,” Hawryluk said. “I wasn’t really playing much, six or seven minutes a night, and I just couldn’t get my confidence up. The coach put me on the third line in the fifth game and I was playing 12 minutes a night and then I started to really feel it and I was able to get my first goal and a couple of points.”

In the third period of his eighth game of the season, against the Colorado Avalanche on Oct. 30, he lunged to knock the puck out of his defensive zone and paid for it when he was hit hard by defenceman Nikita Zadorov, completely separating his shoulder.

“It was unfortunate that injury happened at that time because I was just starting to get rolling,” Hawryluk said. “I missed about two months, which was tough, because everyone’s in the middle of the season and going.”

He didn’t see game action until Dec. 13 during a conditioning stint in Springfield. He admits it took time to regain confidence in the shoulder.

“When I came back, it still hurt a lot, and it still does bother me,” Hawryluk said. “It’s one of those injuries that will linger for a while. I was definitely cautious and it was my hitting shoulder too. For me, it was unfortunate coming back at the time wanting to play the style that I play with a sore shoulder and not having confidence in the situation. After about a month, I was able to wear that off and start playing.”

After earning an assist in six outings in Springfield as he regained confidence in the shoulder, which he says is fine now, he went back up to the Panthers.

But that didn’t mean there was a spot for him.

“I came back and I was never able to consistently get in the lineup,” said Hawryluk, who Florida put on waivers on Feb. 16 in the hopes of returning him to Springfield. “The team had no injuries and the coach didn’t seem to want to play me. It was weird. They put me on waivers out of nowhere.

“I didn’t really know what to expect. Obviously anything can happen at any time … I just tried to have a positive outlook on it despite how disappointing it was. You know there is an opportunity of getting picked up and going somewhere else and that happened.”

On Feb. 17, the Senators pounced on Hawryluk, claiming him off waivers. In a statement issued that day, Ottawa general manager Pierre Dorion called him a “highly competitive two-way forward” and an “energetic, puck pursuit-type of player.”

Hawryluk was elated with the new opportunity but also disappointed by how his tenure ended with the Panthers.

“It felt like Florida gave up on me because I had only played 15 games that season and was injured half the season, so it was really a weird situation,” Hawryluk said. “Then I got picked up by Ottawa the next day and ever since then it was just like a fresh start like at the beginning of a season.

“You feel like you want to prove that it was a mistake by Florida letting me go and you want to be an asset to the new team that’s taking a chance on you. I had that fire lit under me and I just went to Ottawa with a positive mindset to work hard and play my game and show the coaches what I was capable of.”

He already knew Senators associate coach Jack Capuano, and head coach D.J. Smith assured Hawryluk he would be in the lineup. The only problem was that he had missed 10 days with a bout of the flu prior to joining the Sens and was not quite in game shape when he arrived in the nation’s capital.

“Every game I played more and more and was able to get back into shape,” Hawryluk said. “I was able to start playing lots, and next thing you know, I’m playing some top minutes and producing and I was feeling good.”

His average ice time rose from nine minutes 41 seconds per night in Florida to 13 minutes in Ottawa. In 11 games with the Senators, Hawryluk scored twice and added five assists with eight penalty minutes.

Behind the scenes, Hawryluk had all of his possessions and his vehicle in Florida, and was suddenly living in Ontario.

“For me, it’s not as bad as it would be for an established guy who was in a city for a couple of years or on a longer term contract,” Hawryluk said. “I was just renting at the time, so all my belongings and my car, I left everything there. They make it very easy. When I got to Ottawa, I was put up in a hotel and they rented me a car for the whole time.”

He packed some suitcases before he left, and with just six weeks remaining in the season, decided to stay in the hotel. The teams normally handle everything else involved with getting stuff from one location to another.

Everything had also fallen into place on the ice.

“It’s been a perfect fit,” Hawryluk said. “I feel like D.J. is an unbelievable coach. For me as a player, I work very well under the way he plays, I like the systems he runs. Obviously as a player, in order to show what you have and what you’re capable of, you need to play. You have to earn that too, and in Florida I didn’t really get that opportunity.”

Just as he finally started to feel at home in Ottawa, however, the NHL put its season on hold on March 12 due to the COVID-19 pandemic.

Part of that eagerness to get back is his rising confidence in his ability to play in the world’s best league. Hawryluk said players in the NHL do everything very well, but there’s one thing that really stands out for him.

“Guys just understand the game so well,” Hawryluk said. “Guys are so smart. You obviously have to have the skills and the skating and the ability and all of that to play in the NHL, it’s such a fast game, but definitely the guys who are superstars and the guys who are the best are very smart. They think the game at a high level, and I feel like that comes with confidence.”

He said there is a similar transition from under-18 to the WHL, albeit at a much lower level, as players acclimate to a better league and find their way.

Hawryluk certainly became a dominant player in the WHL after Brandon selected him in the second round of the 2011 bantam draft with the 32nd overall pick, exactly the spot he would go three years later to the Panthers in the 2014 National Hockey League draft.

The Roblin product played four seasons with the Wheat Kings, piling up 119 goals and 159 assists in 232 regular season games, and adding 61 more points in 45 playoff games.

Since he graduated, he’s always made a point of coming back to help at the team’s summer hockey schools. As an area guy, he said it knows what it can potentially mean to the youngsters.

It’s also important to him to pay back the organization.

“Brandon created the opportunity for me to be where I am today,” Hawryluk said. “Without being a Wheat King, who knows where I would be? That was the start of my career and helped me to get to the next level. I can thank a million different people, teammates, coaches, everyone who was involved. The fans there were incredible from year one to year four. They never wavered.

“It was cool to win a championship in that final year and see all that hard work paid off because I know how dedicated and passionate the fans are in Brandon. It was definitely special to do that for them.