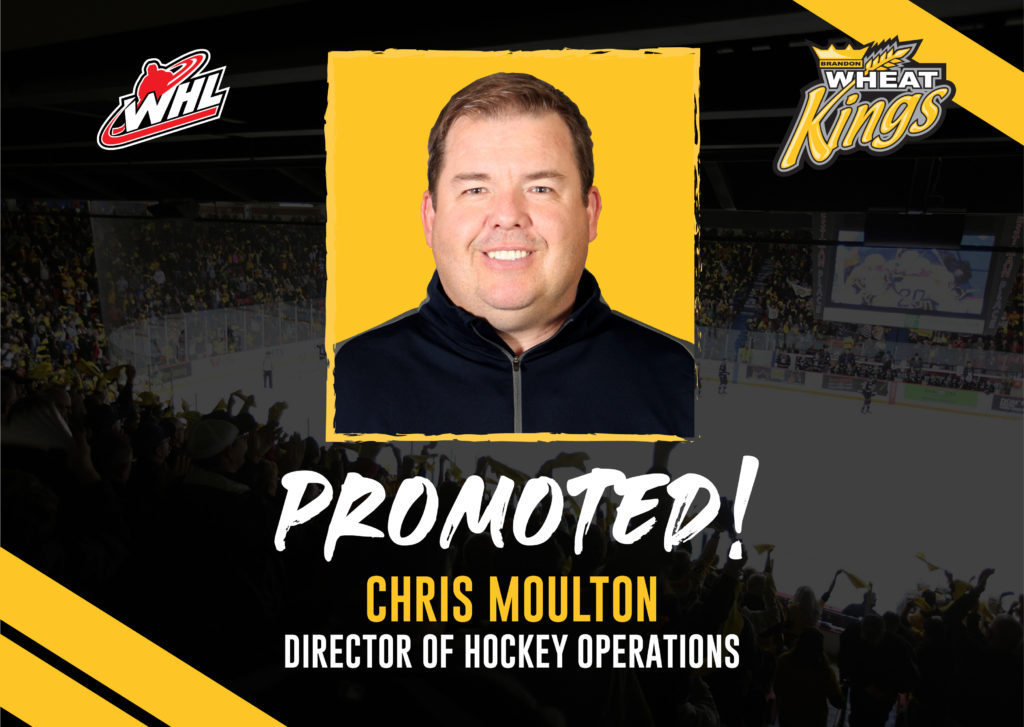 BRANDON, MB. — The BWK would like to congratulate Chris Moulton on his promotion to Director of Hockey Operations with the Brandon Wheat Kings!

Moulton, of Fernie B.C. is entering his second season with the Wheat Kings organization. He was originally hired by the team as Director of Player Personnel on Jul. 2, 2021.

“It’s a huge honour, I’m very happy that Jared has given me the opportunity to take on a larger role with the club” commented Moulton. “To not only be involved with the scouting staff and Prospects Draft but a role with the leadership group to help mold our team moving forward is incredibly exciting”

“Chris is an experienced and trusted hockey mind who has had success everywhere he has gone,” said Jared Jacobson, Owner and Governor “He has drafted some elite high-level NHL players. He is personable and I know that our prospects and families will be treated with the utmost respect and attention. He is a tremendous asset in helping our team get to the next level.”

In his first season, Moulton became an integral part of the Wheat Kings’ hockey operations, from supervising the Wheat Kings’ scouting department to more recently assisting in roster management, prospect evaluation and recruitment efforts across North America and Europe.

Prior to joining the Wheat Kings, Moulton spent 13 seasons as the Director of Scouting / Director of Player Personnel with the Spokane Chiefs. He also spent three seasons as an amateur scout with the NHL’s Buffalo Sabres.

In his role with the Chiefs, Moulton oversaw the entire scouting department, culminating annually with the WHL Draft. He also worked closely with the General Manager and coaching staffs in player evaluation and roster transactions.

His tenure with Spokane and Calgary helped usher the development of a bevy of WHL stars including Karl Alzner, Ryan Getzlaf, Martin Jones, Ty Smith and Kailer Yamamoto.

Moulton was also part of the Chiefs team that captured the Memorial Cup in 2008, and won a WHL Championship with the Hitmen during the 1998-99 season.

“I’m very proud to be part of this group – I took this job in part because of the history; I enjoy being part of the wheat king community.” Says Moulton.

“Our present club has a lot of upsides, and we are going to utilize everything we have to grow our current team – but also, I’m excited about the young guys we drafted and the future is bright – it’s one of the big reasons I signed here, this is the group I want to grow with.“

The Brandon Wheat Kings continue to prepare for the 2022-23 season with the first on ice camp activity starting Sept.1 and the first pre-season game on Sept 9th vs Winnipeg. Home Opener is scheduled for Saturday September 24th against the Winnipeg ICE.