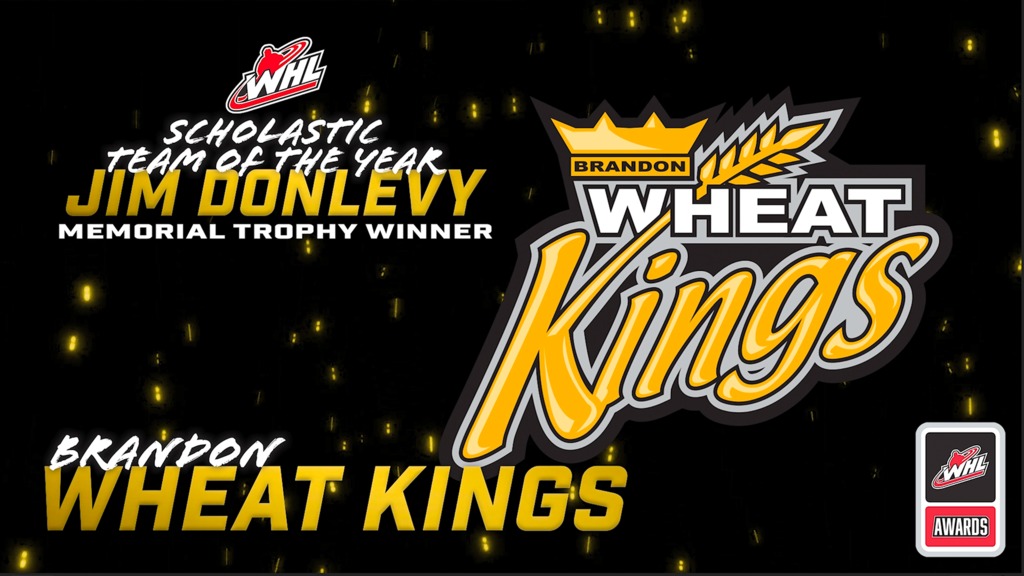 Calgary, Alta. – The Western Hockey League announced today the Brandon Wheat Kings as the recipient of the Jim Donlevy Memorial Trophy presented to the WHL Scholastic Team of the Year.

The WHL Scholastic Team of the Year Award was renamed in honour of Jim Donlevy, long-time WHL Director, Education Services, who passed away in August 2019 following a courageous battle with cancer. This marks the second occasion on which the Jim Donlevy Memorial Trophy will be presented to a WHL Club since its dedication.

The Wheat Kings have proven to be leaders in the classroom among WHL member Clubs, guaranteeing that student athletes meet and exceed their academic potential consistent with the WHL Education Standards and Policies. They commit to ensuring that their policies and practices enhance educational opportunities for all players.

“A huge congratulations to the Brandon Wheat Kings and their extremely hard-working student athletes who hail from four western provinces and two European countries, their amazing teachers who help these young men to excel in their academics during another tough COVID year, their Education Advisor Glenda Zelmer, the Wheat Kings coaches and management team, and the families that support and love them,” said Lisa Stollery, daughter of the late Jim Donlevy.

High school student athletes with the Wheat Kings attended Crocus Plains Regional Secondary School and maintained an overall average of 88 per cent during the first semester of the 2021-22 academic season. With COVID-19 remaining a challenge through the 2021-22 season, Wheat Kings players completed both semesters by studying at the rink. Daily supervision was provided by Wheat Kings staff, including from Education Advisor Glenda Zelmer.

“Thank you to everyone from the WHL who recognized the Brandon Wheat Kings and the hard work – it’s been such a hard time for every team, so I consider us to be very lucky,” Zelmer said. “Every team had to get really creative and unique with such trying times. I feel very honoured to be receiving this award on behalf of the Wheat King organization.

“It really takes a community to make this work. Previous owner Kelly McCrimmon really started the culture with this team by enforcing and encouraging education to be a No. 1 priority. That was really instilled upon everybody affiliated with this team. Jared Jacobson, taking over ownership, absolutely continued on with that same mentality – anybody associated with this Club knows how important education has been and will continue to be.”

This marks the first time the Brandon Wheat Kings have been named WHL Scholastic Team of the Year.

The 2022 WHL Awards were voted on by WHL General Managers and members of the media.