(Courtesy of Rob Henderson, The Brandon Sun) — The Brandon Wheat Kings spent Monday getting acclimated to their home away from home for the first round of the Western Hockey League playoffs.

The team practised in Winnipeg’s MTS Centre, which will be the Wheat Kings’ home ice for Games 3 and 4 of their Eastern Conference quarter-final with the Medicine Hat Tigers next week, as well as Game 6 if it’s necessary.

“We wanted to have the opportunity to practise in there and have our players get used to the surroundings,” said Wheat Kings head coach/general manager Kelly McCrimmon, whose team will be pushed out of Westman Place by the annual Royal Manitoba Winter Fair.

“We had a good practice,” he added. “We accomplished what we wanted to accomplish. The guys enjoyed it, I think.”

After finishing sixth in the Eastern Conference with a32-31-1-8 record, the Wheat Kings drew the third-place Tigers (46-18-4-4) for the first round.

The first two games are slated for Friday and Saturday night in Medicine Hat, Alta., before the stage shifts quickly to Winnipeg for Game 3 on Monday, March 28.

“It’s obviously good to get accustomed to where we’re going to be playing in the first round, the MTS Centre,” said Wheat Kings right-winger Mark Stone, who tied for third in WHL scoring this season with 106 points, including 37 goals. “It’s good to get a practice under our belt, seeing as how we’re going to be rushing in there on Sunday and getting ready to play on Monday.”

Stone, 18, is one of four Winnipeggers on the Wheat Kings’ roster, along with Scott Glennie, David Toews and Paul Ciarelli.

Stone has never played at the MTS Centre before and he found the new surroundings to be to his liking.

“Most of my minor hockey, we played at the old Winnipeg Arena. I’ve practised a few times (in the MTS Centre) but never had a game,” Stone said. “It’s a really nice facility.”

The last time that Stone played in Winnipeg, he was leading the Winnipeg Thrashers to the 2008 Manitoba AAA Midget Hockey League title and he’s excited to get the chance to suit up in his home city again.

“Obviously excited to play in Winnipeg,” he said. “I played my minor hockey there my whole life.

“Ever since midget, I haven’t played there in a long time. It’s pretty good to get our feet wet in there.”

“I don’t think that it warranted a major and game misconduct and there will be no further disciplinary action,” WHL vice-president of hockey Richard Doerksen told the Sun on Monday.

Replays showed that Howden turned toward the boards a split second before Wiebe hit him.

ONE-TIMERS: After Game 3, the teams will get a couple of days off before Game 4 on Thursday, March 31 in Winnipeg. In between those dates, the American Hockey League’s Manitoba Moose have a pair of home games against the Rochester Americans, a team that includes former Wheat Kings G Tyler Plante and D Colby Robak … The last time the Wheat Kings played in Winnipeg was back in 2006 when they faced the Moose Jaw Warriors in the playoffs. The Wheat Kings played six games in the MTS Centre that season, including four in the regular season.

Republished from the Brandon Sun print edition March 22, 2011 B1 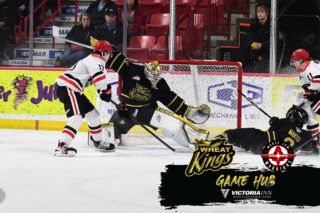 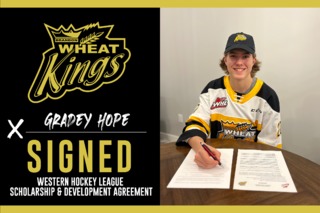 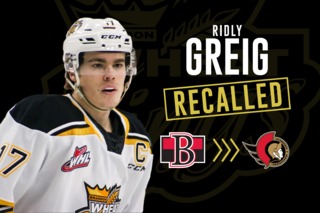 NEWS: Ridly Greig Recalled by the Ottawa Senators
4 days ago 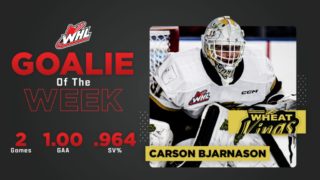 Bjarnason named WHL Goaltender of the Week
4 days ago