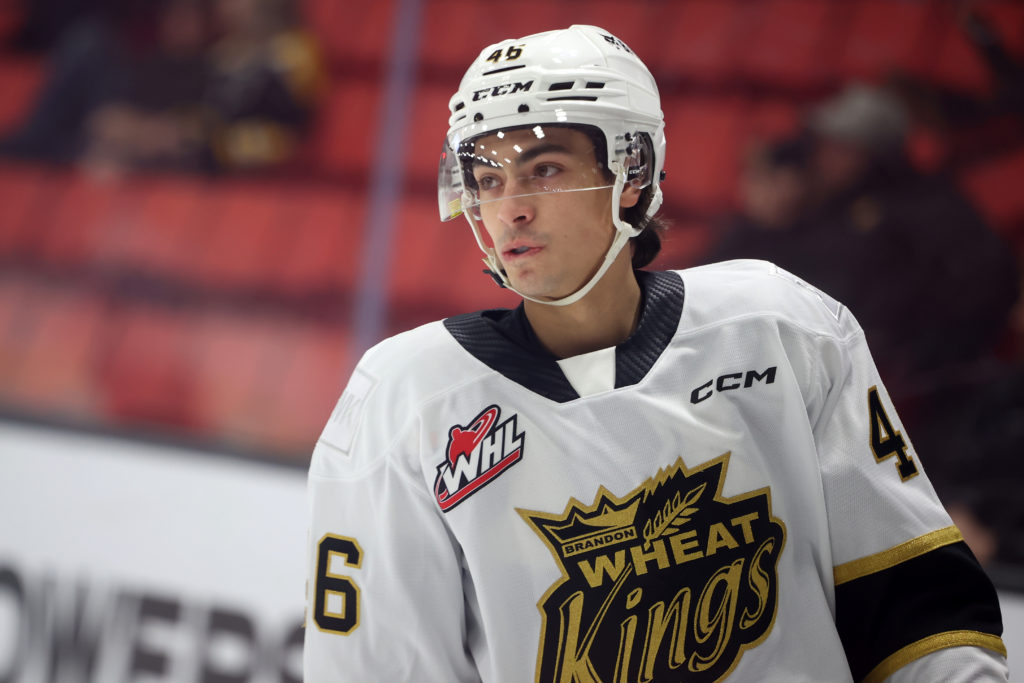 Dawson Pasternak has certainly taken a long and winding road to the Brandon Wheat Kings, but it was a very direct route last Tuesday.

The 19-year-old forward from Winnipeg was acquired from the Portland Winterhawks at the Western Hockey League trade deadline for the rights to Colin Frank, a second-round pick in 2026 and a sixth-round pick in 2025.

In one of the wilder trade deadline stories in recent memory, Pasternak learned at breakfast in Saskatoon that he had been dealt to Brandon. The five-foot-nine, 158-pound Pasternak texted his father Craig after he learned the news and then the pair spoke.

“I said ‘I was traded today,’ and he said ‘Oh no, where?’” Pasternak said. “I go ‘Well, it’s actually pretty good. I’m going to Brandon’ and he goes ‘What! Really!’ Obviously it’s a lot better than going somewhere else across the country to a new team. It’s really nice to go close to home.

“Obviously he was a little bit sad for me and wasn’t sure how I was feeling personally but I told him ‘I’m actually kind of excited. It’s a new beginning’ and then you could hear the excitement coming out of him knowing I was coming to play close to home.”

Brandon opened a three-game trip to Alberta with a game against the Calgary Hitmen that ended after deadline. It faces the Red Deer Rebels on Saturday and the Edmonton Oil Kings on Sunday.

Wheat Kings senior scout Mark Johnston drove to Saskatoon the night before the trade, and that morning he picked Pasternak up and the two high-tailed it to Brandon.

They pulled in around 4:30, and at 7 p.m., the right-shooting Pasternak joined his new teammates for a 4-2 win over the visiting Seattle Thunderbirds.

“I guess I didn’t really expect to be on the road so quick and playing a game for another team that night,” Pasternak said. “I woke up thinking I had to get ready for playing Prince Albert tonight and then a couple of hours later, I was driving and thinking I have to play Seattle again, who I can’t get away from. That was a little interesting.

“Knowing I couldn’t say goodbye to my billets and I didn’t have time to say bye to my teammates, it was all so quick and sudden. The night ended off pretty well beating Seattle.”

The start of his hockey journey didn’t begin nearly as dramatically.

“It was skating lessons, crying on the ice, trying to get off, watching my parents in the stands,” Pasternak said. “I wanted to play hockey because I watched my older brother when I was younger.”

He alternated between playing up front and dropping back onto the blue-line, and in his bantam draft year in 2018, he was actually a defenceman with the Winnipeg Hawks U15 AAA squad. Even so, Portland selected him in the fourth round with the 85th-overall pick, and in the Manitoba Junior Hockey League, the Dauphin Kings made him the 13th-overall selection.

“Growing up, in winter hockey I would play forward and in spring hockey I would play D,” said Pasternak, who also played baseball and football for several years, and still golfs and plays ball hockey. “I thought I picked (a position) when I was 11 or 12 years old and then when I got to 14, the bantam draft year, the coach made me a D-man and said ‘You’re playing defence.’

“It was the same coach Nolan Patrick had and he did the same thing to him.”

Entering his 15-year-old season in 2018-19 as a freshly drafted player, he attended Portland’s camp and was noticed by guest instructor Noëlle Needham, the head coach of the Sioux Falls Power 16U team.

Pasternak’s friend Jack Oleksiuk — who would later play for the MJHL’s Virden Oil Capitals — was already going down to South Dakota to join the team and persuaded him to come for a tryout, which turned out successful.

“(Needham) approached my family and said ‘Look, we have a good program down there and we want you to come play on our older team and we’ll look after you. We need an answer in four days,’” Pasternak said. “I’m just this young kid. I went home. One minute you’re living at home ready to go to school with all your friends and two days later I was out the door.

“The good thing was that I ended up living with my best friend down there.”

Pasternak played in 72 games that season, tallying 82 points and 128 penalty minutes, and then returned for the 2019-20 season in his 16-year-old campaign after he was reassigned by Portland.

Because he had spent the previous season in the States, United States Hockey League teams were watching, including the Chicago Steel.

“My thought process was that if I can’t play in Portland this year, I’m going to go play the best hockey that I can right now,” Pasternak said. “If that’s going to the USHL if I have that opportunity, why not take it? I thought it was just a tryout to see if I would get called up at Christmas but I played one exhibition game and scored, so I guess they thought I was good enough to play on the team for the whole year.

“I went back to Sioux Falls for three or four days and then ended up spending the whole season in Chicago.”

In the 2020-21 season, with the WHL in a holding pattern due to the pandemic, Pasternak elected to head back down to the Steel.

“If I played in Chicago, I would get to play a whole 55-game season and playoffs,” Pasternak said. “I’m happy I did. We ended up winning the championship. That was pretty cool, and I got to play with a lot of good hockey players.”

Entering the 2021-22 season, Pasternak admitted the college route was a very real possibility.

“It was ‘Should I go here or should I play here?’” Pasternak said. “I was thinking and thinking and I came to a decision. I thought, ‘You know what, I’ve always wanted to play in Portland, I think I’m going to go.’”

At about the same time, the Chicago general manager called to say he was going to be dealt, and Pasternak told him not to bother and headed to Portland.

He said his game didn’t have to evolve much when he made the move to the WHL, noting the two leagues are similarly skilled, but the WHL probably has more gritty players. As a result, it didn’t take much time to adapt.

“I’ve been a small player my whole life and I’ve figured since I was 13 years old that if I want to be good as a small player that I have to play as a bigger player, never to shy away from hitting, scrums, fighting,” Pasternak said. “I’ve always had that little edge in me and I’m very competitive so I really didn’t have to change the way I was playing. Obviously systems-wise and stuff it’s all different but I’m pretty comfortable out there.”

He made the Winterhawks, and after weathering a five-game streak without a point to start his career, the points started to come. He had five goals and nine assists in 34 games when his season ended on Jan. 21, 2022, in a game against the Tri-City Americans.

He was skating back into the defensive zone when a Tri-City defenceman toe-picked.

“He fell on my leg,” Pasternak said. “I wasn’t near him, wasn’t making contact with him, he just fell on it. My body went forward and my leg went the other way.”

He tore his ACL and underwent surgery five days later. He said the first couple of weeks were hard because there were complications that meant they had to go in from a second spot to fix it.

That put him back a couple of weeks, but he was still skating before expected. Pasternak credits his early return to Portland athletic therapist Rich Campbell, who he said pushed him through his comfort zone and got him back on his feet.

Pasternak was cleared for contact in August and in the Winterhawks lineup for their season opener on Sept. 23. In 28 games prior to the trade, Pasternak posted five goals, 12 assists and 25 penalty minutes.

He said his game is built on his work ethic and hockey IQ.

“You can see that I want the puck always and will be all over it,” Pasternak said. “Hitting people and I’d say honestly making smarter decisions and good plays for my teammates and setting them up well and having fun.”

He’s made a quick impact with the Wheat Kings, earning an assist in his Brandon debut against Seattle, and scoring his first goal in a 4-3 loss to the Moose Jaw Warriors on Saturday. His last goal came on Dec. 10.

“It always feels good,” Pasternak said of scoring. “Moose Jaw is obviously a good team so getting one on the board really is nice.”

Pasternak is billeting with former Victoria Royals defenceman Luke Shipley, who was acquired in a deal on Nov. 24. He’s already starting to get comfortable and said he’s confident the Wheat Kings can make some noise down the stretch.

“I hope we can work our way into a comfortable playoff spot and keep building some confidence going into playoffs this year,” Pasternak said. “Maybe we can make some kind of miracle run against all these teams that are loading up right now. I believe in these guys already, and we can have a good strong finish to the season for sure.”

At least he knows what city he’ll be in for the rest of the season. And that’s no small comfort to someone who has played in four places in the last four years.

He chuckles when asked about it.

“Everyone’s road is different and mine has been pretty crazy so far.”