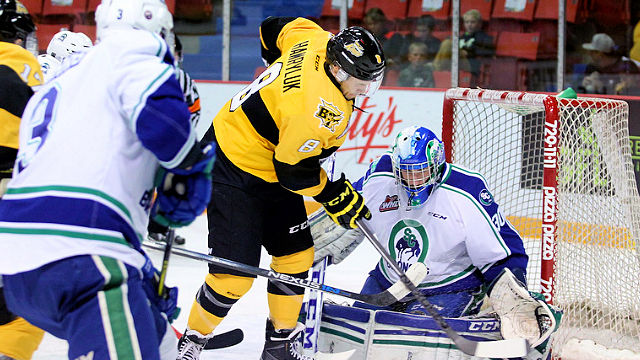 Swift Current, SK. – The Brandon Wheat Kings have moved to within a point of the front running Prince Albert Raiders in the Western Hockey League’s Eastern Division.

Jayce Hawryluk scored three times to lead the Wheat Kings to an 8-0 whitewashing of the Broncos in Swift Current Wednesday night.

For Hawryluk, it was his sixth career hat trick, with two of the goals coming in the opening period when Brandon opened up a commanding 4-0 lead.

“Scored first, then I thought we were winning shifts 5-on-5 which led to power-play opportunities,” Brandon GM/Coach Kelly McCrimmon told Bruce Luebke on CKLQ’s post-game show, “So we had the 2-0 lead and scored the third and the fourth goals in the power-play, which really changes the game. That was real key to our start tonight.”

Tim McGauley, Ty Lewis and Ivan Provorov also scored for the Wheat Kings, who dominated this game from start to finish. In addition to outshooting the Broncos 48-17, they went 3 for 6 with the man advantage.

Netminder Jordan Papirny made 17 saves for the shutout – his second of the season and eighth of his WHL career. That moves the 19-year old Edmonton product into a tie with Jamie Hodson and Glen Hanlon for third place on the club’s all time list. Only Tyler Plante (12) and Andrew Hayes (11) have more.

The game also marked the return of former Bronco blueliner Jordan Thomson to Swift Current. The 19-year old Wawanesa product, who was acquired in a deal for Mark Taraschuk last week, finished the night +2.

The 16-8-0-2 Wheat Kings will now return for three straight home games, beginning Friday night against the visiting Regina Pats. Tickets are on sale at the Keystone Centre box office, by calling 726-3555 or online at keystonecentre.com

Meanwhile in off-ice news, the WHL club has announced that former captain and the current General Manager of the Winnipeg Jets – Kevin Cheveldayoff – will headline the 2016 CKLQ Sportsman’s Dinner, scheduled for Thursday, February 4th at the Keystone Centre.

Proceeds from the event will go to the hockey club’s Scholarship Foundation.