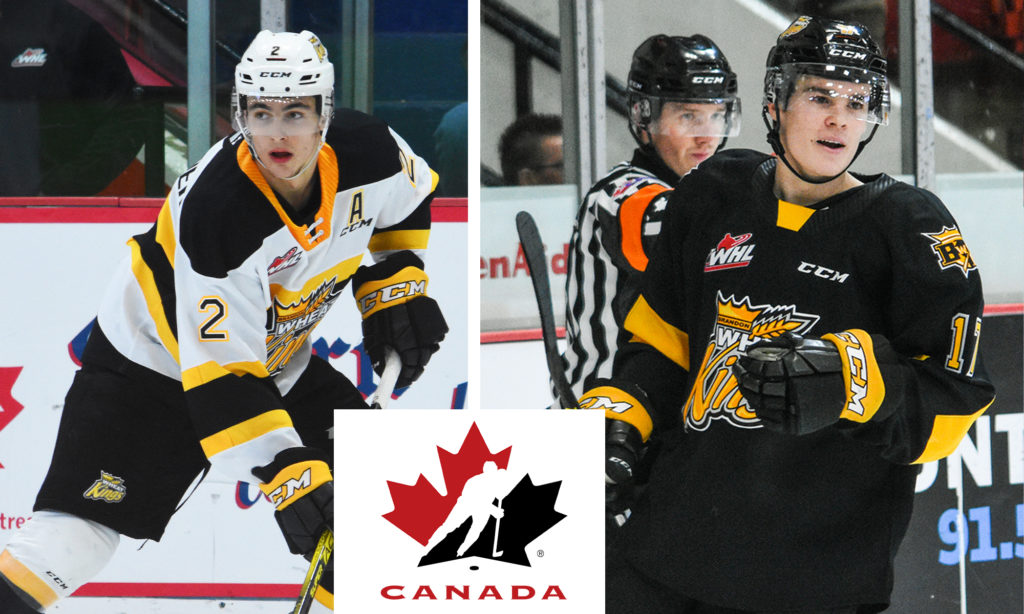 A pair of Wheat Kings will compete for a spot on Team Canada’s roster as defenceman Braden Schneider and forward Ridly Greig have been invited to Canada’s National Junior Team Sport Chek Selection Camp being held on November 16 to December 13 in Red Deer, AB.

This will be the second Canadian World Junior’s selection camp for Schneider (Prince Albert, SK) who was one of the final players to be left off of last season’s gold medal-winning Team Canada squad, and the first invitation for Greig (Lethbridge, AB). Both players have worn the maple leaf before, representing Canada at the U17 level and at the Hlinka Gretzky Cup in the past.

The 2020 IIHF World Junior Championship opens on Christmas day in Edmonton, Alberta. Due to the ongoing coronavirus pandemic, the tournament has moved from originally taking place in Red Deer to a “competition bubble” without spectators at Rogers Place in Edmonton, AB where the National Hockey League recently hosted the Stanley Cup playoffs to provide players a safe environment to compete.

“Although this has been a difficult year for our athletes and staff, we are excited to unveil the 46 players who will compete for a spot on Canada’s National Junior Team at the 2021 IIHF World Junior Championship,” said Salmond. “We know our athletes are excited for the opportunity to defend gold on home ice this year, and we expect a highly competitive selection camp with a number of difficult decisions to be made when it comes time to select the players who will wear the Maple Leaf in Edmonton in December.”

Canada’s Selection Camp will be held at the Westerner Park Centrium, home of the Red Deer Rebels of the Western Hockey League (WHL). To ensure the health and safety of all participants and the community at large, Hockey Canada will be closely following enhanced measures around testing and team protocols.

The selection camp will include practices and three intrasquad games, as well as six games against a team of U SPORTS all-stars, between Nov. 28 and Dec. 13 before the team enters the bubble in Edmonton in preparation for the 2021 IIHF World Junior Championship. The camp will take place in a cohort bubble and will be closed to the public and media. Details about media availability throughout selection camp will be announced at a later date.

“As we continue to navigate through the COVID-19 pandemic, Hockey Canada has taken important steps to maintain the health and safety of our National Junior Team athletes and staff, as well as the community at large, during selection camp and throughout the World Juniors,” said Tom Renney, chief executive officer of Hockey Canada. “As much as we would enjoy allowing fans into the building to support Team Canada throughout the camp, we need to be responsible as we look to keep all parties safe before teams enter the bubble in Edmonton.”