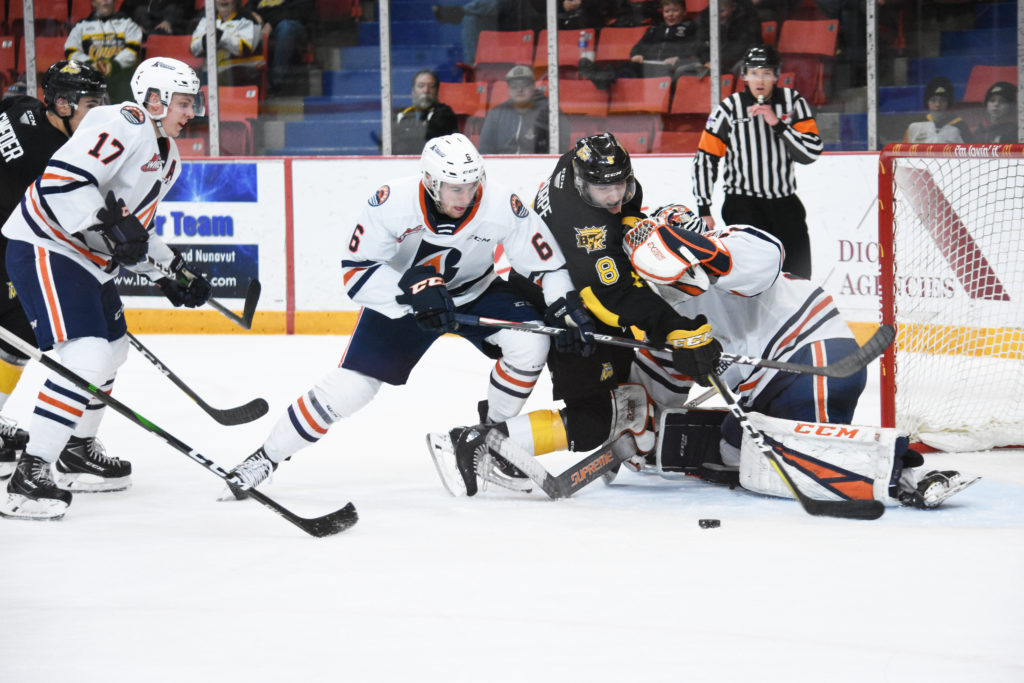 After combining for 8 goals through three periods, the deciding goal came via shootout in Brandon on Friday as the Kamloops Blazers beat the Wheat Kings 5-4 at Westoba Place.

The Wheat Kings trailed early in the game when Max Martin opened the scoring for Kamloops just 36 seconds after puck drop. Logan Stankoven would add another in the first frame to put the Blazers up 2 and take control of the game heading into the first intermission.

It didn’t take long for the Wheat Kings to cut the lead in half after Jonny Hooker scored just under 2 minutes into the second period on a feed from Vincent Iorio. Hooker played an exceptional game on Friday scoring the Wheat King’s second goal also – two of six total goals scored between both teams in the second period. Brandon got goals from Ridly Greig and Cole Reinhardt while the Blazers’ Ryan Hughes and Martin Lang also found the net to send the game into the third period tied 4-4.

The scoreless third period had many more offensive chances than the score sheet suggests. After the back and forth scoring in the second period it was netminders Jiri Patera for Brandon and Kamloops’ Dylan Garand who stole the third. Garand stopped a number of great chances for Brandon early in the game and rebounded well after letting 4 goals in during the second period, while Patera’s play improved as the game wore on. Garand stopped 31 on the night and Patera stopped 38.

Brandon played short for a great deal of the third, racking up 5 individual penalties and killing all of them to force overtime.

The shootout’s first skater was Brandon’s Ridly Greig, who appeared to beat Garand but rang his backhand off the goal post. Kamloops’ Ryan Hughes scored next and all other shooters failed to find the back of the net.

The Wheat Kings will close out their pre-Christmas home schedule this week with games on Tuesday and Friday against Kelowna and Moose Jaw respectively.

Tuesday night is Rain Check Night, which means any unused Wheat King ticket can be exchanged at the Keystone Centre box office for a “free” ticket to this game (regular box office agency fees apply) and Friday night’s game features the annual Teddy Bear and Toque Toss night presented by Shoppers Mall, in support of the Christmas Cheer Registry.

Tickets to both games go back on sale Saturday morning at the box office, by calling (204) 726-3555 or online at keystonecentre.com.