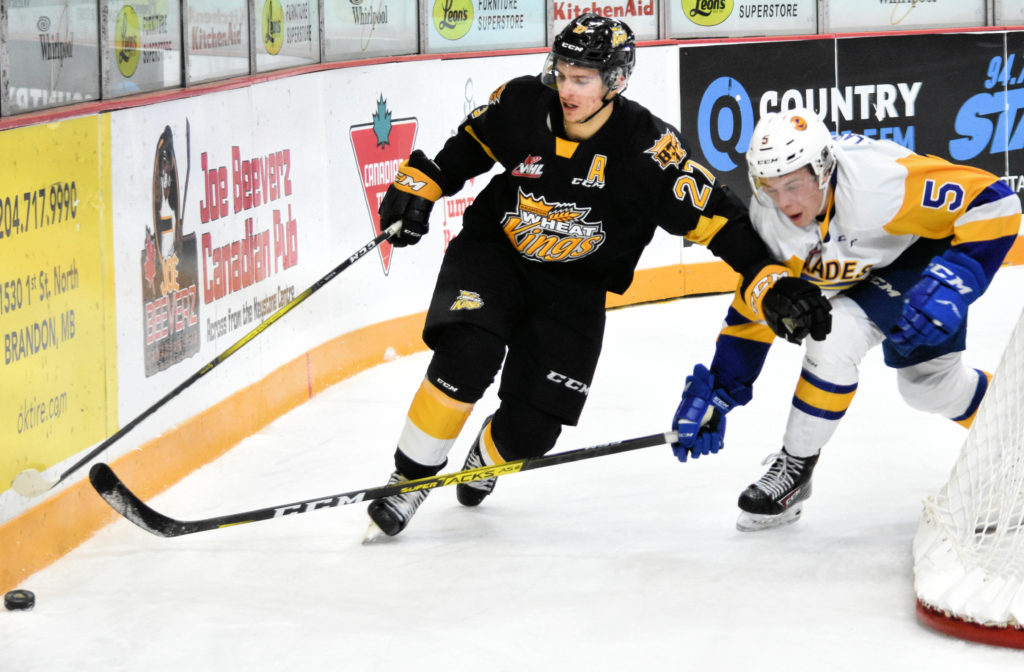 Brandon, MB. – The Brandon Wheat Kings dropped a disappointing 2-1 decision to the Saskatoon Blades Friday night as they played host to their final home game in the month of October.

With the loss, the Wheat Kings – who now head out west for their longest road trip of the 2019-20 Western Hockey League season – saw their record slip to 3-5-0 as Saskatoon bounced back from last Sunday’s overtime shootout loss to Brandon.

After trading goals in the first period, the two teams went scoreless in the second, setting the stage for Saskatoon’s third period game winner.

The game winner came at the 6:01 mark by Blades’ captain Chase Wouters, while Saskatoon was skating a man short.

Special teams played a big role in this one.

In addition to scoring shorthanded, the Blades managed to kill off all six Brandon powerplays.

Eric Florchuk also scored for the winners while Cole Reinhardt – with his first of the year – replied for the Wheat Kings, who outshot the Blades 37-33.

Veteran Nolan Maier, who suffered the loss on Sunday, rebounded nicely Friday night by turning aside 36 shots, including fifteen in the third period when the Wheat Kings held the territorial edge in play but couldn’t get one past him.

Ethan Kruger meanwhile took the loss, despite a strong night – especially in the opening period, when he was called upon to make seventeen saves.

Kruger got the start as veteran Jiri Patera will be sidelined for the next two to three weeks with a lower body injury. Replacing him on the team’s 7-game west coast road trip will be 17-year old Connor Ungar, who was recalled Thursday from the Whitecourt Wolverines of the Alberta Junior Hockey League.

Patera one of two veterans missing from the Brandon lineup Friday. Also out and currently listed as day to day was forward Ben McCartney.

By scoring one goal tonight, fans in attendance will receive one cent off per litre at Heritage Co-op in Brandon all day Saturday. Heritage Co-op was the presenting sponsor of the game and urged those attending to bring a nonperishable food item. All donations will be delivered to the Samaritan House in Brandon this weekend.

The Wheat Kings western road swing will begin Wednesday night in Everett, Washington against the Silvertips.

Brandon’s next home game will be Friday, November 1st when the Swift Current Broncos pay a visit to Westoba Place.

Tickets to all of Brandon’s remaining regular season home games are on sale at the Keystone Centre box office, by calling (204) 726-3555 or online at keystonecentre.com