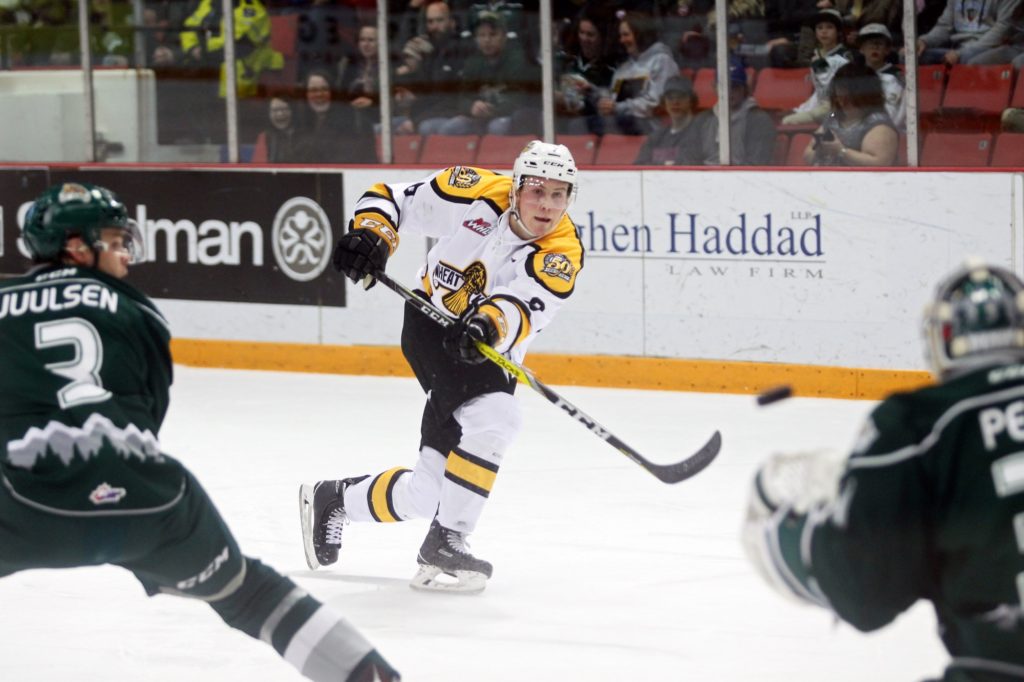 FORMER WHEAT KINGS AMONG THOSE BENEFITING  FROM WHL SCHOLARSHIPS

(Courtesy of Perry Bergson, Brandon Sun) — When Kade Jensen began his Western Hockey League career with the Lethbridge Hurricanes during the 2013-14 season, he was sure his future lay in the game.

And while the 22-year-old defenceman from Calgary continues to patrol the blue-line, he now does it for Mount Royal University Cougars at the U Sports Level alongside two other former Brandon Wheat Kings, Taylor Green and Ryley Lindgren. Jensen admits he’s completely changed his mind about the WHL’s scholarship program.

“School was definitely not in the picture when I was playing in the WHL as a 16-year-old and 17-year-old and 18-year-old,” said Jensen, who is in his second year at MRU. “When I started thinking about it was more at the end of my career, it was what was going to be the most beneficial to me in the future, not two or three years, but down the road?”

For each season a player is in the league, they receive a guaranteed year of school that includes tuition, textbooks and any compulsory fees. Players don’t have to play post-secondary hockey to qualify, and if they don’t want to attend university, they can use the program at trades schools or professional career training programs.

Two dozen players with Wheat Kings roots are currently taking post-secondary studies, and there are a record 391 former WHL players in the scholarship program this school year.

When he was making up his mind, Jensen got as much as advice as he could from fellow players, some of whom had gone the pro route and some of whom had headed to university, plus business people and family and friends.

“I think that’s kind of where I made my mind up,” Jensen said. “There’s always the talk about guys who go play pro and get injured, and it’s a career-ending injury, and they don’t have an education to fall back on. For me, this wasn’t really a safety decision, it was more taking care of my future. I’ve worked hard enough to do something in my hockey career, and something I’m proud of is playing five years and being able to go to school and try to get a business degree and then move on with hockey. Hockey doesn’t last forever: When that’s done, I have a business degree to fall back on and figure out what I want to do in life after that.”

Brandon acquired Jensen on Jan. 10, 2017 along with goaltender Travis Child and two draft picks in return for veteran goalie Jordan Papirny. Jensen was then dealt to the Victoria Royals on Dec. 1, 2017 for a fifth-round pick in the 2018 bantam draft as Brandon trimmed down to three overagers.

“It’s definitely easy,” Jensen said of the program. “Basically all you have to worry about is going to the rink for practice and making class on time. The WHL takes care of pretty much everything. You buy your textbooks and keep your receipts and send it in to them and they reimburse you right away. There’s nothing you really have to worry about too much.”

Garrett Armour has found the same thing at the University of Manitoba.

The Winnipeg product was acquired from the Saskatoon Blades on Oct. 1, 2015 for a conditional 2017 draft pick. He played 97 games with Brandon during the championship 2015-16 season and the following campaign, scoring once, adding 10 assists and earning 104 penalty minutes with the Wheat Kings.

He accumulated three years of the WHL scholarship, and is now in is third year of business studies.

“It’s super easy once you get the hang of it,” Armour said. “It’s really just a two or three-step process. Once you sign up for classes, you make sure that you talk to Greg Gardner (from the WHL) to make sure that he knows you’re headed to school, and other than that the textbook forms and everything just come pretty naturally, and they’re always available to help if you have any questions.”

Armour said that wasn’t much discussion about the program in the Brandon dressing room, especially on the championship team that would later send a dozen players to the pro ranks.

But he always knew it was a terrific fallback option.

“It was awesome for me and my family as well,” Armour said. “Playing in the western league for three years and coming out with something to show for it with my schooling being paid for was amazing. Not everyone can go pro or even wants to go pro. For me to have the opportunity to go to school and know that it was all covered and take the classes that I wanted to take was pretty awesome.”

Armour has decided to focus on school, so it’s his first year outside competitive hockey. It’s all about the books now, but he admits that returning to school wasn’t easy.

“It definitely was a transition being out of school for a couple of years and then going to a new, more intense version in university,” Armour said. “It definitely was hard, but like anything, you get used to it. Being at home was obviously nice — I love living at home — and making the trip to school was something new. I was definitely excited to try and hopefully excel at it … You treat it just like hockey. You grind through it every day, show up and put in the hard work and then you’re done for the day.”

He added the opportunity to go to school makes a great hockey experience even better.

“Some of my greatest memories and greatest friendships stem from the WHL and of course my time in Brandon,” Armour said. “I wouldn’t trade it for anything. I had an awesome run and an awesome experience, and now it paying off for me after hockey is just an added bonus.”

Jensen echos those sentiments, saying he’s blessed by the opportunity to build on what he calls his human capital.

“A lot of people are coming out of school in debt and struggling to pay their student loans off,” Jensen said. “That’s something I’m very grateful for. The WHL has taken care of everything, and I’m able to play a sport that I love and go to school and get an education. The WHL scholarship, when I was younger, I didn’t think it was something that I wanted to do or something that was beneficial but now that I’m here and can see what other kids are going through and what I have to go through, I’m definitely very grateful for this opportunity.”