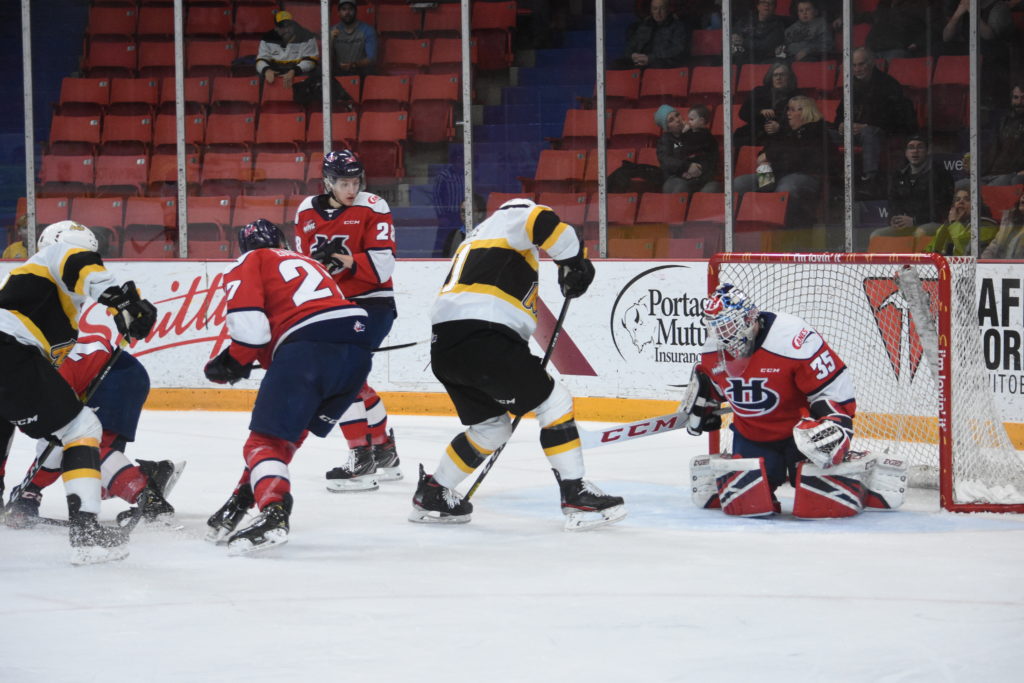 The Brandon Wheat Kings saw their 10 game winning streak come to an end on Saturday night at Westoba Place but it took the Lethbridge Hurricanes three raucous periods and a back-and-forth overtime to do so.

Much like their game against the Victoria Royals the night prior, the Wheat Kings jumped ahead of their opponent in a big way, scoring three opening goals in the first frame.

4:35 into the game, Ridly Greig broke into the Hurricanes’ end only to pull up and wait for a trailing Cole Reinhardt to get in behind the defence and put his stick where Greig could find it. Greig fired a hard pass from the side wall for Reinhardt to redirect under Hurricanes goaltender, Bryan Thomson.

Shortly after Reinhardt’s marker it was Greig on the receiving end of a pass from Connor Gutenberg, streaking in and putting it past Thomson 9:11 minutes into the period. Neithan Salame had the second assist.

The final goal of the period belonged to Ben McCartney who took a feed from Marcus Kallionkieli and beat Thomson, putting Brandon ahead with a commanding lead and effectively ending Thomson’s night as the Hurricanes returned from the first intermission with Carl Tetachuk in net for the remainder of the game.

Whether it was changing goalies or the threat of being a victim to Brandon’s league-leading win streak, the Hurricanes returned for the second frame a much different team.

Logan Barlage opened the scoring for the Hurricanes just 3:43 into the second, Beating Brandon netminder, Jiri Patera with assists going to Hurricanes Alex Thacker and Ty Nash. But less than 4 minutes later, Brandon negated the Barlage goal by getting Reid Perepeluk his fifth goal of the season and first as a Brandon Wheat King when he tipped a shot from defencemen Chad Nychuk. McCartney got the second assist, and his second point of the evening.

With the score 4-1 in favour of the Wheat Kings, the Hurricanes mounted a comeback.

Still in the second period, Buffalo Sabres prospect and Canadian World Junior gold medallist, Dylan Cozens scored his first of the evening. One of the more highly touted players on the ice this evening, Cozens was a constant factor throughout the game and drew attention from the Wheat Kings every shift.

The second period was also chock full of penalties for both sides as the Hurricanes scored with 4:11 remaining on a powerplay, Danila Palivko netting his first of the season and sending the game into the second intermission, 4-3.

The comeback continued early in the third period as Chase Wheatcroft scored less than 3 minutes in, and Barlage netted his second of the evening at the 7:47 mark giving the Hurricanes their first lead of the night. The momentum swung considerably and the hometown Wheat Kings fans were understandably stunned. What had begun as a 3-goal lead had now dwindled to a 1-goal deficit and the rough play and antics after the whistle changed the tempo of the game considerably.

But just under halfway through the third frame the Wheat Kings found life again when a scrum in front of Lethbridge’s net resulted in Marcus Sekukdiak’s seventh goal of the season. Ty Thorpe and Jonny Lambos were credited with assists but the red goal light was all that mattered to a crowd who saw their chance at extending their win streak come back to life. The remainder of the period was frantic at times but both teams rarely got caught out of position defensively. With more than two minutes left in the third period, it was clear that both sides were playing for overtime.

In the extra frame, Lethbridge cycled the puck at one point for more than a minute and the fatigue was noticeable from Brandon’s skaters. A shot that missed Patera’s net completely resulted in an odd-man rush for Brandon but Connor Gutenberg got an awkward pass that he couldn’t make good on. Both sides kept the puck for long stretches of time and both teams got quality chances that were either turned aside or didn’t even test either goalie.

Eventually, it was Cozens with his second goal of the evening on an assist from Barlage and Calen Addison that ended the game. A low shot that found its way underneath Patera was the difference and the Hurricanes escaped with a 6-5 final score.

“Once again I really liked our start. I liked our energy, I liked our preparation and I liked our execution in the first twenty minutes” says Wheat Kings head coach, Dave Lowry.

Lowry also mentioned that the next 9 of Brandon’s 10 games will be against teams in contention for the WHL playoffs. They start a 4 game road trip to Alberta when they play the Edmonton Oil Kings on Tuesday, January 28th and then see Red Deer the following night, the Calgary Hitmen on Friday and Medicine Hat Tigers Saturday, February 1.

The Wheat Kings play at home next on February 7th against the Tigers for RE/MAX WHL Suits up for Organ Donation Night, an evening celebrating Canada’s iconic connection with Hockey Night in Canada to benefit the Kidney Foundation. Tickets to the game on February 7th can be purchased at the Keystone Centre box office, online at www.keystonecentre.com/tickets or by calling the box office at (204) 726-3555.