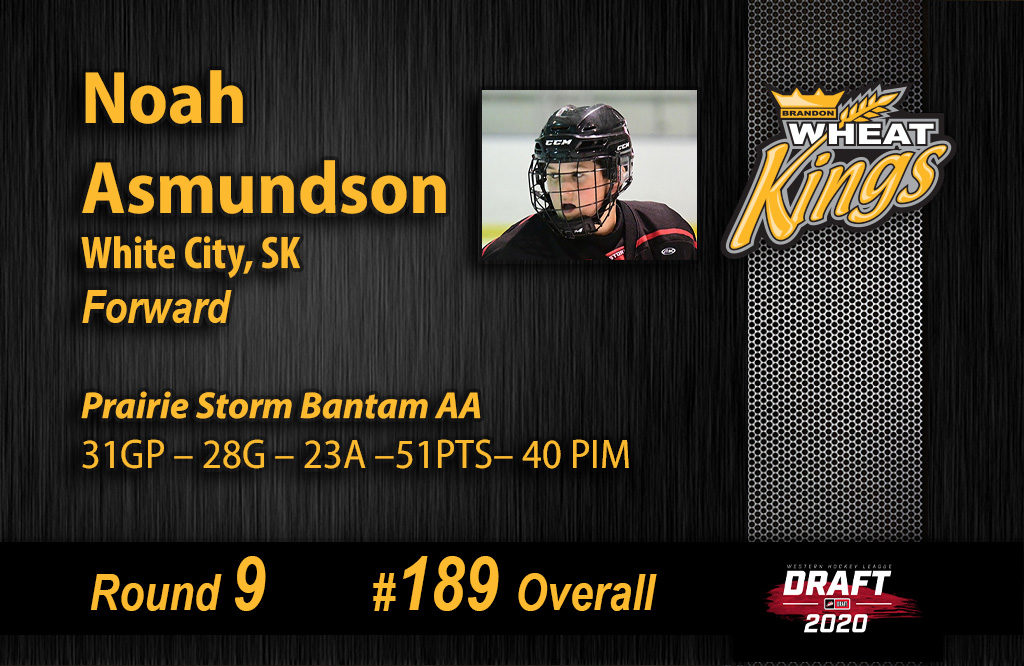 Noah Asmundson is hoping the same success will follow him on the ice as on the water.

The Brandon Wheat Kings selected the 15-year-old competitive water skier from White City, Sask., in the ninth round of the Western Hockey League bantam draft with the 189th overall selection on April 22.

“It’s pretty much on one ski and there are these buoys you have to go around,” Asmundson said. “There are six on a course and you keep going faster and faster speeds until you can’t reach it. There are provincials every year and if you earn one of the top two spots, you go to westerns. If you’re in the top two in westerns, you go to nationals. It’s all just age group, just like hockey.”

He has won his age group in Saskatchewan four times, and placed fourth in westerns twice.

“As the year went on, he was a fellow who just kept getting better and better,” Gasper said. “He plays hard, he gives you a solid effort. The skills are coming, and he’s going to keep working on them and getting better and better. He’ll play some (under-18) AAA next year as well but we just really like the relentless work ethic. He’s another one of those guys who doesn’t take a shift off.”

Asmundson started early, with his family telling him he was skating while he was still in diapers.

His parents both played the game, with his father Travis suiting up for the University of Regina Cougars.

When he’s playing his best, Asmundson said a number of things would stand out for anyone watching.

“I’m winning my battles for sure and then you would see the puck on my stick and I would be dishing it out and finding open space,” Asmundson said. “My feet would be moving and I’m one of those guys who when you have the puck, you don’t want me near you.”

He continues to shore up his weaknesses, saying speed is one focus. Another is his cardio.

“My first three steps are definitely a thing I’m focusing in on a lot,” Asmundson said. “I’m also working on my stamina and being able to play more minutes and making sure that I have the same amount of energy for my first shift compared to my last shift.”

Asmundson grew up making the short drive east from White City to see the Regina Pats at the Brandt Centre.

He also saw a game at Westoba Place when he was in Brandon for a tournament. The Wheat Kings happened to lay a beating on the Pats that night.

“It was one of the most memorable WHL games I’ve ever been to,” Asmundson said. “They actually played the Pats and Brandon smoked them. It looked like such a good team out there. It was so much fun to watch.”

The WHL was certainly on his mind prior to the bantam draft.

“In the days leading up to the draft I was thinking about it a bit,” Asmundson said. “Once the draft started, I was watching pretty much every pick.”

When the ninth round rolled around, the news he was waiting for finally arrived. He shared the moment with his family and friends.

“I was on a call with a couple of buddies and my dad was working in the basement,” Asmundson said.

“Right away, I could hear his chair pop out from the desk and he said ‘Hold on. I have to end this meeting.’ He came upstairs and saw me and I was talking to my friends about it. Everyone kind of came together. Just to have the support of everyone was such a good feeling.”

The destination didn’t hurt either. The right-handed shot was thrilled with how it turned out.

“The Wheat Kings are in my top two WHL teams,” Asmundson said. “I love the Brandon Wheat Kings. I couldn’t pick a better team to be drafted by. I was absolutely stoked to go to Brandon.”

With access to the ice restricted during the pandemic, Asmundson has been rollerblading to simulate skating and is able to fire pucks in his backyard.

He knows his game will have to improve to play in Brandon, but adds he has the benefit of time.

“My IQ has to be top of the line,” Asmundson said. “Some people have lots of skill but if you’re not mentally there, nothing is going to happen. Also it’s my skills. My shot and skating and physicality aren’t WHL calibre yet. It’s just a lot of hard work, on ice and off ice. It’s a long-term thing, not right away. I have time to do everything.”

That process beings in earnest next season when Asmundson hopes to play for the Regina Pat Canadians in the Saskatchewan Midget AAA Hockey League.

He’s eager to skate at camp in Brandon too.

“Being a part of something is always fun,” Asmundson said. “When it’s something you’re passionate about, that makes it even better. It will be awesome.”