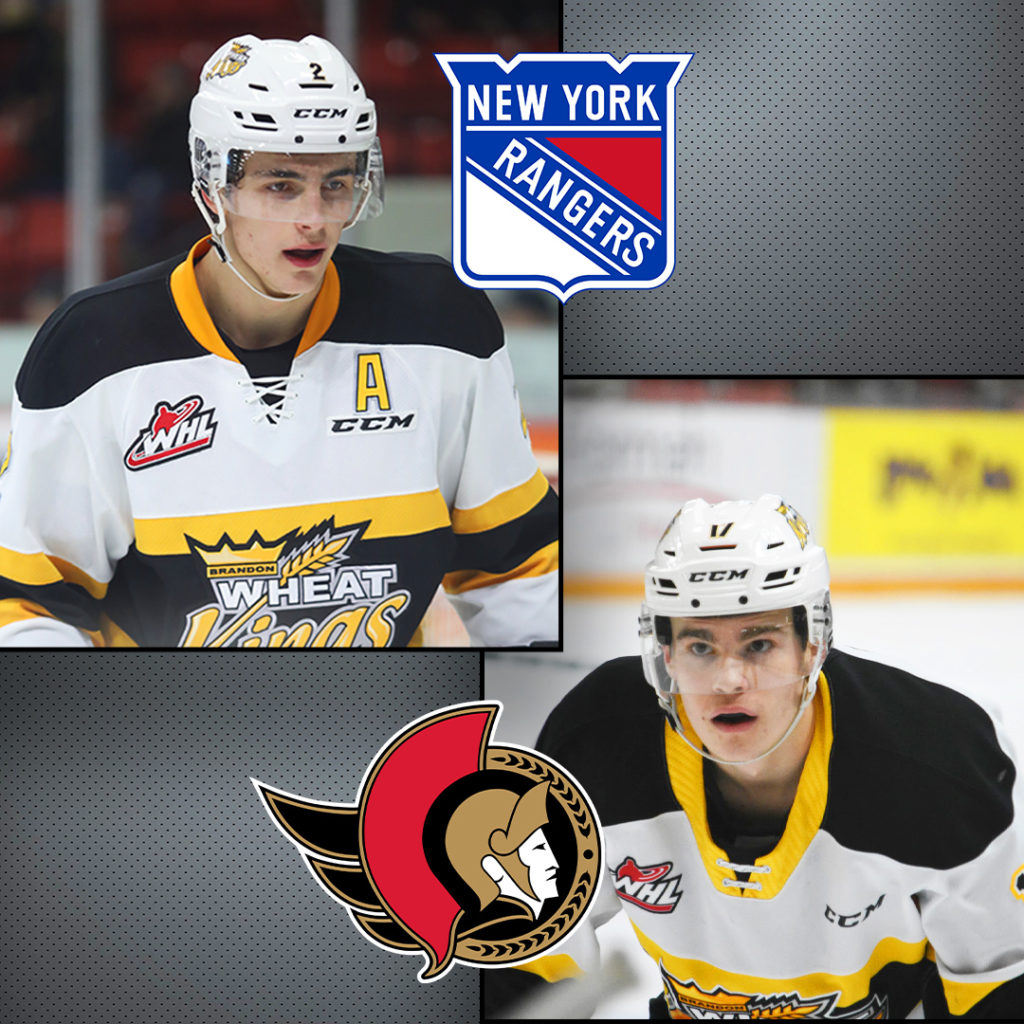 Greig was taken by the Senators with their third pick of the night after they chose Time Stutzle (Mannheim DEL) 3rd overall and Jake Sanderson (USHL) with the 5th pick. The ’02-born Greig is 5’11”, 162 lbs and finished the 2019-20 WHL season with 60 PTS (26G-36A) in 56 games. The speedy sniper turned pro scout’s heads leading up to the draft with not only his skill but also his grit, garnering 83 PIM in the shortened junior season.

A 6’2”, 202-lbs right-handed defenceman from Prince Albert, Saskatchewan, Schneider is the first Brandon Wheat King to get drafted by the Rangers since Richard Nejezchleb was taken 122nd overall in 2014. Prior to that, Stefan Cherneski was also taken by the blue shirts 19th overall in 1997. Schneider finished the 2019-20 season with 42 PTS (7G-35A) in 60 GP and has been a physical presence for the Wheat Kings since suiting up for his first season in 2017.

Born to be a Ranger. pic.twitter.com/Oc5yDpvNHT

A left-shot centre from Lethbridge, AB, Greig joins the likes of Jordan Fransoo in 2011 (186th overall) and Mark Stone in 2010 (178th overall) as Wheat Kings who have been drafted by the Ottawa Senators.

Tuesday marks the third time in franchise history that a pair of Wheat Kings were both selected in the first round of the NHL Draft. In 2009 Brayden Schenn and Scott Glennie both were taken in the first round while the 1979 draft featured Laurie Boschman, Brian Propp, Brad McCrimmon, and Ray Allison all taken early.

Schneider was the 10th CHL prospect to be taken in Tuesday night’s draft and the 3rd player from the WHL after forward Seth Jarvis (Portland Winterhawks) was taken 13th by the Carolina Hurricanes and Kaiden Guhle (Prince Albert Raiders) was taken by the Montreal Candiens with the 16th pick.

For the 25th straight year, the Kubota CHL/NHL Top Prospects Game showcased top NHL Draft-eligible talent, featuring players from across the Western Hockey League, Ontario Hockey League, and Quebec Major Junior Hockey League competing before hundreds of NHL scouts in attendance. The 2020 Kubota CHL/NHL Top Prospects Game was hosted in Hamilton, Ont., on Thursday, January 16. All seven WHL players selected in the first round of the 2020 NHL Draft appeared at the event.

A product of Winnipeg, Man., forward Seth Jarvis finished second in WHL scoring with 98 points (42G-58A) in 58 games during the 2019-20 WHL Regular Season. The 5-foot-10, 172-pound forward was a key contributor to a Winterhawks squad that finished atop the WHL Regular Season standings, earning the Scotty Munro Memorial Trophy as WHL Regular Season Champions. Jarvis was named to the WHL Western Conference First All-Star Team for his outstanding performance and was recognized with the Brad Hornung Trohpy, presented annually to the WHL Most Sportsmanlike Player. In 130 career WHL regular season games, Jarvis has registered 139 points (58G-81A).

A product of Sherwood Park, Alta., defenceman Kaiden Guhle set career highs in all major offensive categories, including goals (11), assists (29), and points (40) during the 2019-20 season. The 6-foot-2, 186-pound defenceman stepped into a feature role with the Raiders in his sophomore season. Guhle played a prominent role for the Raiders as a rookie, helping his team claim the 2019 WHL Championship.

A product of Prince Albert, Sask., defenceman Braden Schneider nearly doubled his offensive output in 2019-20, collecting 42 points (7G-35A) on the heels of a 24-point campaign in 2018-19. A 6-foot-2, 202-pound blueliner has been an anchor for the Wheat Kings since stepping into the league on a full-time basis in 2017-18. Schneider’s stellar performance in 2019-20 earned him a place on the WHL Eastern Conference First All-Star Team.

A product of Saskatoon, Sask., forward Connor Zary electrified with his offensive performance in 2019-20, recording 86 points (38G-48A) in 57 appearances with the Kamloops Blazers. The 6-foot, 178-pound sparkplug was a driving force for the Kamloops Blazers, helping his Club to a B.C. Division title in 2019-20. The outstanding campaign saw Zary named to the WHL Western Conference First All-Star Team. Over the course of 188 career WHL regular season games, Zary has registered 182 points (73G-109A).

A native of Airdrie, Alta., forward Jake Neighbours brings a power-forward presence to the ice surface. In 64 games this past season, he notched 70 points (23G-47A) for the Edmonton Oil Kings, who claimed the WHL’s Central Division crown. Over the course of 122 career WHL regular season games, the 5-foot-11, 195-pound forward has secured 98 points (34G-64A).

A native of Calgary, Alta., forward Ozzy Wiesblatt is known for his high-energy game and elite talent. The 5-foot-10, 183-pound forward emerged as a leader for the Prince Albert Raiders in 2019-20, registering 70 points (25G-45A) to finish second on the team in scoring. A member of the Raiders’ 2019 WHL Championship team, Wiesblatt has appeared in 129 career WHL regular season games, amassing 110 points (41G-69A).