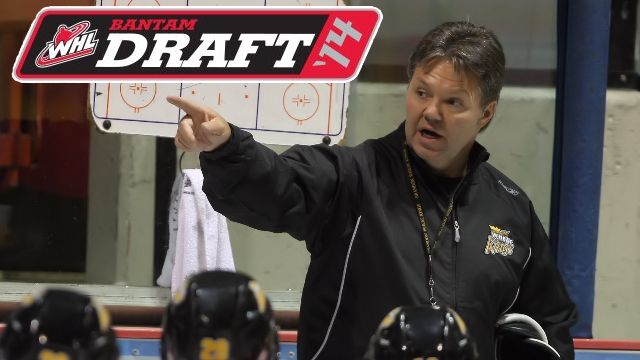 (Courtesy of James Shewaga, Sports Editor, Brandon Sun) — Kelly McCrimmon made history last Thursday, on a day that was two years in the making.

For the first time in franchise history, the head coach/general manager/owner of the Brandon Wheat Kings stepped up to the podium to pick first overall in the WHL’s annual bantam draft, selecting star forward Stelio Mattheos of Winnipeg.

For most teams, holding that No.1 overall lottery pick on draft day is the consolation prize for struggling through a non-playoff season after posting one of the worst records in the league.

However, that was far from the case for the Wheat Kings, who became the first playoff team in the 25-year history of the WHL bantam draft to pick first overall. Not only did the Wheat Kings advance to the second round of the WHL playoffs this spring after a bounce-back season, but they earned the opportunity to add another franchise player to what is already a 50-player protected list brimming with prime prospects, courtesy of another masterful move made by McCrimmon two years ago at the 2012 bantam draft.

Few could have predicted just how shrewd of a deal McCrimmon made when he shipped overager Brenden Walker to the Memorial Cup host Saskatoon Blades that year, a trade that landed Brandon a bundle of draft picks in 2012, 2013 and 2014, as well as the option to swap first-round picks with Saskatoon this year. When the Blades bottomed out and landed in lottery position this season, the Wheat Kings exercised that right, moving all the way up to pick first overall for the first time ever after winning the draft lottery.

In the end, what began as a bit of a bonus in that trade package two years ago has turned into a blue-chip building block of Brandon’s future.

Mattheos, who was ranked as the best prospect available by scouts contacted by the Brandon Sun prior to the draft, now joins a long list of Wheat Kings’ top talent that also includes last year’s brilliant bantam draft crop of power forward Nolan Patrick (fourth overall), dynamic defenceman Kale Clague (sixth overall) and homegrown Brandonite Tanner Kaspick (25th overall), who all made an impact as 15-year-old call-ups this past season.

While there are no absolute guarantees when dealing with 14- and 15-year-old kids, it’s clear the Wheat Kings’ protected list is the envy of the league, filled with prolific prospects poised to join an already stocked roster of young talent in the 16-, 17- and 18-year-old age groups.

If their production matches their projections, Brandon is well on its way to building the foundation of a championship team.

Republished from the Brandon Sun print edition May 2, 2014